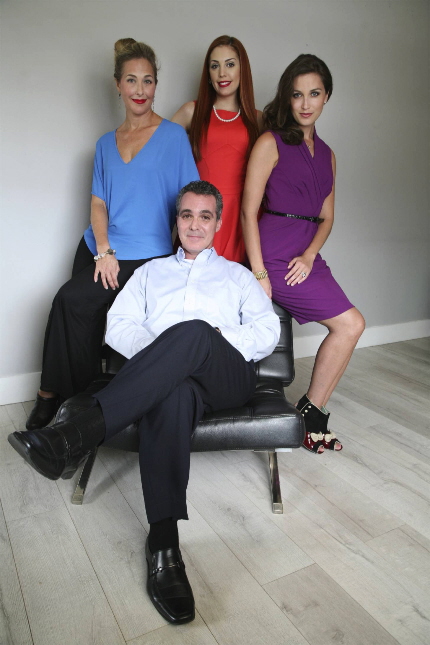 “Personally, not professionally, I’m not a big fan of revues.”

I wrote that opening sentence to this review on the car ride home Friday from Delray Beach before I studied the playbill for MNM Productions’ edition of Side by Side by Sondheim. Amazingly, director Bruce Linser had written almost the same thing in his program notes.

We both unknowingly agreed that most revues of show tunes, no matter how wonderfully sung and how good the material is, lack the storytelling that slingshots them in a theater performance several levels above a “standard” sung in a cabaret act.

But Stephen Sondheim is decidedly a composer-lyricist laser focused on songs telling a theatrical story; they lose half their impact taken out of context.

So Linser pushed four superb performers to act the dramatic, psychological and emotional guts out of these numbers; the result was often moving and stimulating renditions of theater songs about specific people in specific situations rather than disembodied “numbers.”

Simply, this may be the best production of Side by Side by Sondheim seen in South Florida or many other places.

Exhibit A: Shelley Keelor’s line-by-line dissection and resulting performance of the survivor’s anthem “I’m Still Here” may well be the best I’ve ever heard – including those by Elaine Stritch and Patti LuPone. Sung a tad slower than usual, each chosen phrase seems to recall some concrete fragment of the past in her character’s mind.

The 1976 revue was created as a vest-pocket low-expense appraisal of Sondheim whose ascendancy to the pantheon of theater geniuses was finally being recognized. Although he had written the lyrics to Gypsy and West Side Story, the world was acknowledging his due with the subsequent debuts of his music and lyrics for Company, A Little Night Music and Follies.

The irony is that even greater work lay ahead including Sweeney Todd, Into The Woods and Sunday In The Park With George. That has given latter-day troupes pause whether to produce Side by Side since it leaves out half of his greatest hits; some remember the debacle when the Coconut Grove Playhouse did an unapproved “expansion” in 2001. That has prompted the creation of other Sondheim revues including Marry Me A Little, A Stephen Sondheim Evening, Putting It Together and Six By Sondheim.

But in our country’s Bicentennial year, there was already a large enough catalog to make it difficult to choose. The creative team picked about 30 songs including gems cut from shows because they did not fit the moment, plus oddities that few people knew about. The show’s continuity script has been updated over the years, with some songs added, some dropped. But the 1976 bar remains in place.

Linser and Company’s achievement is to identify the narrative occurring around the songs and then dig for the emotional truth whether it be joy, sorrow, quiet rue, broad comedy or acerbic humor. This production is a pungent rejection of the 1976 rap on Sondheim that he was too intellectually facile and too emotionally cold.

Linser and Reekie don’t let the quartet go over-the-top, but they don’t shy away either. A good example is Keelor, again, giving her rendition of Sondheim’s Greatest Hit “Send In The Clowns.” She and LeGette precede the song with a short scene in which the old lovers, Desiree and Fredrik, regret that they have never been able to have a lasting relationship. She sings the song to him with all the civilized restraint but pent up regret that the song contains. But after Fredrik leaves, Desiree sings the last verse and chorus in private where she can let her sorrow wash out over the words.

The same quality imbues Sessa’s impassioned yet controlled rendition of a mentally fraying housewife in a loveless marriage, “Losing My Mind,” or Paige’s brittle anger in “Could I Leave You.”

With crystalline enunciation, the quartet have mastered Sondheim’s famously difficult lyrics from Sessa in the manic tongue twister “Getting Married Today” to the trapeze precision of the interweaving “You Must Meet My Wife” by LeGette and Keelor. There was only one bobble opening night in another song when someone jumped ahead in one song and Reekie had to play catchup, only to jump back once again.

Still, the most obvious virtue is the pure vocal quality of this group, especially Sessa who has a hell of a range. She nailed the low notes of the torchy gut-wrenching “Losing My Mind” and the stratospheric top notes of the finale of “I Have A Love.” Sessa also displayed her comic chops as she embraced the zanier side of Sondheim in “Getting Married Today” and “The Boy From…”

LeGette, who won acclaim for his lead in the Caldwell Theatre’s concert version of Sunday In The Park With George, has a warm enveloping baritone although some parts of some songs seemed to push the limits of his range. But he’s skilled at delivering the lyrics with style and emotions such as the ambivalence of “Marry Me A Little” and especially the sophisticated wit in the disaffected duet “We’re Gonna Be All Right.”

Paige, who was Aldonza in The Wick’s recent Man of LaMancha and two contemporary shows at Arts Garage, has an assured delivery that can range from that duet with LeGette to the heartfelt “I Remember.”

But Keelor was the revelation. She was impressive enough as the crazed mother in Slow Burn Theatre Company’s Carrie, but that did not prepare audiences for the aforementioned two bravura numbers.

Linser deserves much of the credit for pulling these performances out of the performers’ marrow. His staging in the first act felt smoothly fluid if perfunctorily drawn from The Revue Director’s Handbook: actors intertwining in group numbers and the like. The sole exception was the kinetic and frenetic “Getting Married Today” in which the bride ends up on her hands and knees. But in the second act, he became more inventive, especially in the silly satire of the bossa nova craze, “The Boy From…” which had Sessa climbing all over the piano and the bass player as if she was a floozy chanteuse.

Traditionally, the show is performed with two pianos, but Reekie is strong enough to ably handle that assignment by himself with precision and perfection. Instead, he has added (and co-orchestrated) the addition of a stand up acoustic bass played by Dave Wilkinson. That gives the music a heft and fullness otherwise missing from this and many other revues. Indeed, the entire show has a roundness of sound that is remarkable for a small revue.

On the subject of sound, designer Kenny Reiss ensures that every syllable uttered is as clear as the listener’s hearing acuity is capable of. He ought to give lessons to a lot of other houses in the region.

Since the production will move to another venue this month, the scenic design is simple, some boxes to stand and sit on plus a backdrop by Cindy Taylor meant to evoke a New Yorker cover and Hirschfeld caricatures complete with hidden Ninas. Much of the work changing moods is due the lighting by Jayson Tomasheski.

Sondheim lovers need not be afraid. This Side by Side is tasty summer lemonade with a bit of tart lemon.

Side By Side By Sondheim plays through Aug 9 at The Crest Theatre, 51 N. Swinton Avenue, in Delray Beach and then Aug. 13-16 at the Rinker Playhouse at the Kravis Center for the Performing Arts in West Palm Beach. Performances 7:30 p.m. Thursday-Saturday, 1:30 p.m. Saturday-Sunday. Running time 2 hours 10 minutes with one intermission. Tickets at the Crest $34-$40, $20 student rush available 30 minutes before curtain. At the Rinker, $40. Visit delraycenterforthearts.org/events/side-by-side-by-sondheim or www.kravis.org.

This entry was posted in Performances, Reviews and tagged Alix Paige, Bruce Linser, Paul Reekie, Shelley Keelor, Side By Side By Sondheim, Wayne LeGette. Bookmark the permalink.