Mosaic’s Edge Of Our Bodies Is Provocative If Confusing Drama 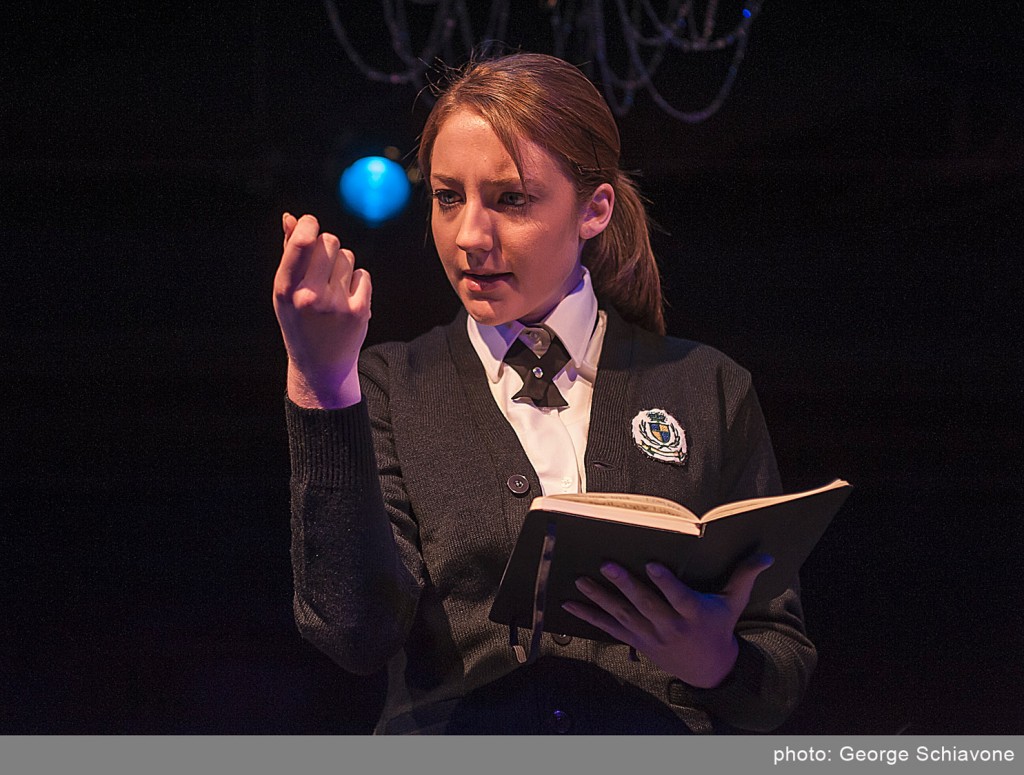 When Waiting for Godot had its American premiere at the Coconut Grove Playhouse in 1956, a critic said he had no idea what he had just seen, but he knew it had been important.

Contemporary playwright Adam Rapp is not writing drama as important as Godot, but he seems to share Beckett’s indifference to whether audiences comprehend his idiosyncratic depiction of his dark vision. He also is writing something of weight and worth, even if you’re not at all certain what it is.

Which brings us to Rapp’s The Edge of Our Bodies closing out Mosaic Theatre’s season. This extended monologue by a high school girl reading from her journal and acting out what she has written is by turns illuminating and opaque, precise and equivocal, comprehensible and incomprehensible. It rarely comes head on at what its heroine is feeling let alone whatever Rapp is trying to say.

If forced to guess, it’s something about a girl on the cusp of womanhood grappling with various incarnations of sex as a form of human relations. But it is likely far deeper, subtle and complex than that. Your guess is as good as anyone else’s. For once, a director’s note in the program might be of some help.

This is not unusual for Rapp. He not only does not meet his audience halfway, you spend much of his plays straining to find toeholds of narrative drive even though the details of the journey are inherently interesting. It intentionally makes you feel as unsettled as the protagonists. But if audiences can’t understand what is happening before them, a lot of people are not going to be cathartically satisfied, even after protracted discussions on the ride home or days later.

Yet, if you can accept all that, you may find Bodies intellectually stimulating and artistically intriguing, if not emotionally fulfilling. The trick is to stop fighting the confusion and just let the play take you wherever Rapp is trying to go, much like admiring a work of non-representational art in a gallery.

You can also enjoy the calibrated performance by Lexi Langs under the precise guidance of guest director Margaret M. Ledford who unreel and reveal the heroine’s inner turmoil inch by inch.

Langs plays Bernadette, a high school junior seemingly travelling on a train from her Connecticut boarding school to New York City. Garbed in a plaid dress, white blouse, knee socks and button up sweater, she is reading to us from her journal what initially seems like a recap of the train trip.

This construct makes no sense since she seems to be telling what happened as it is happening before us. This was explained only when I Googled the original production at the Humana Festival of 2011 and discovered that this entire play is a flashback that she is relating on the stage of her school’s theater after her performance in a production of Jean Genet’s The Maids.

A would-be short story writer, Bernadette pens finely-grained prose notable for incisively observed details about people and scenery. It’s a little purple with metaphors, just as budding writers and Rapp himself are wont. Her diary reveals that she is pregnant and is en route to tell her sweetheart, a wealthy college student in Manhattan. Initially, she seems an archetypal disaffected, emotionally blunted and precociously bright 21st Century teenager. But Rapp, Langs and Ledford slowly, very slowly peel back her blithe exterior to reveal a troubled human being fighting swelling anxiety, sadness and anger.

She continues to narrate the day’s events that include visiting her boyfriend’s terminally ill father, allowing herself to be picked up in a bar by a creepy businessman and recollecting her performance in Genet’s equally iconoclastic and initially tough to grasp play. The connection of Bodies or even Bernadette’s character to the Genet work is never made apparent to those unfamiliar with the play.

On this odyssey with no clear thematic thread, Bernadette seems to be a female Holden Caulfield travelling through a surreal Cheeverish Wonderland.  If not for the sudden appearance near the end of the play of a maintenance man (the always wonderful Jim Gibbons) clearing away the set of The Maids, you might think Bernadette’s just having a breakdown in an institution. Or maybe she is. Or is this Sartre’s Hell? Or….  If this seems to the Mosaic team be overthinking the play, the confusion ought to be a red flag.

Rapp’s works often fall into two paradigms: the depiction of alienated Gen X slackers trying to figure out, if not seeking, their place in the world, such as his Finer Noble Gases and Red Light Winter, produced at Mosaic in 2006. But Bodies is more like his introspective monologue, Nocturne, which also x-rayed a seemingly conventional life to reveal the anguish inside. Bodies, like much of his work, is less an event-driven arc than a portrait commenting on a character.

Praise Ledford, a meticulous and insightful craftswoman, for divining as much as one could ask for from Rapp’s script and helping Langs forge this character. One problem is that Langs spends the first 15 minutes reading to us which makes her too much of a cipher to connect with. With her head in the book, she’s prevented from showing more than flashes of personality, a wry smile, a brief glance at the audience with those teal-colored eyes. It is only when she starts to tell us the story while looking at us that we begin to see the twinges of discomfort. It is almost a surprise when we suddenly realize deep into the play that Bernadette has been suppressing profound angst. Increasingly, we realize that Langs (an NYU theater student who has worked in Orlando) is, indeed, a skilled actress.

Mosaic’s creative team has done themselves proud: Matt Corey’s introspective incidental music, Suzanne M. Jones illumination creating clear shifts of location and emotion by the changing the quality of light, and especially Douglas Grinn’s setting that we finally realize is for The Maids: two interconnected round platforms with faux marble tiling and elegantly appointed with furniture and accessories worthy of a salon.

Kudos to the Mosaic for once again shaking up audience expectations by reconfiguring the auditorium, this time putting the risers in an L shape around a thrust stage.

Finally, applaud Mosaic Executive Artistic Director Richard Jay Simon for taking a chance on a play whose title we don’t understand, but which requires audiences to work at the theatrical experience rather than be passive receptors, and then forces them to chew over what they have seen for days to come.