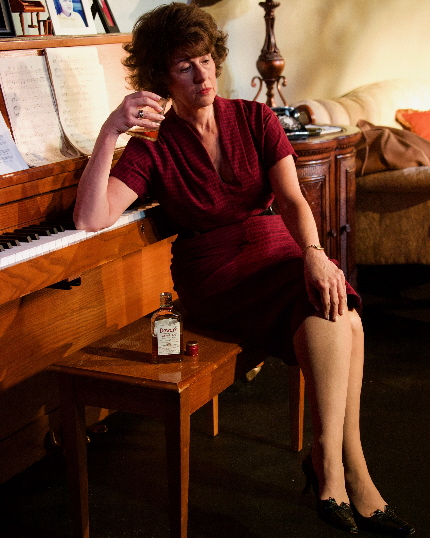 Almost from the beginning, play by play, Neil Simon imperceptibly nudged the boundaries of his comedies by feathering in increasingly serious threads. Some worked better than others; some worked, but his tired businessman audience wasn’t receptive to the experiments.

The most adventurous for its place in his evolution – and one of the least welcomed by the yuk-seeking audience – was 1970’s The Gingerbread Lady. The play remains a staple of regional and community theaters because Simon’s name sells and because it offers a bravura role for a middle-aged actress seeking a satisfying part after Tennessee Williams’ Amanda.

But the portrait of a world-class alcoholic cabaret singer struggling – and losing – her battle with her addiction while cracking wise with two equally witty and wounded friends is far, far more difficult than it seems. Check out some You Tube videos of other productions to see how poorly this can come off.

It will make you appreciate the superb skill that veteran actress Patti Gardner and director Genie Croft have invested in Primal Forces’ harrowing emotional spiral, considerably leavened by Simon’s copious gallows humor and self-lacerating quips that few wrote better than he.

The premise is that once charismatic and talented performer Evy Meara (Gardner) returns to her apartment after a ten-week drying out at a sanatorium. Over the years, she has destroyed her marriage and her career. She quips about her last job two years earlier, “I set a house record in Pittsburgh. I fell off the stool 17 times.” She easily admits that she has a sailor’s mouth and an insatiable taste for sex with anyone who will comply.

She is welcomed home by her classic Manhattan neurotic middle-aged friends, the failing actor and unabashed kvetching queen Jimmy (Jeffrey Bruce) and the looks-obsessed but still lovely Toby who serves as “a distraction” for her husband’s clients at business dinners (Janice Hamilton).

They tease each other with banter. Evy tells Toby, who brags no one has ever seen her pores, “Don’t pout or you’ll crack your makeup and start an avalanche on your face.”

They are joined by Evy’s 17-year-old daughter Polly (Gaby Tortoledo). Evy lost custody of Polly in a divorce stemming from her drinking but Evy admits she wasn’t much of a mother before. Polly has her father’s permission to move in with Evy as a kind of caretaker and a last chance at bonding.

Clearly, all four love each other, which is a good thing since Evy’s seeming last chance to reclaim a future is on ground shakier than Evy’s legs.

It’s dramatically required and inevitable that Evy will fall off the wagon. When she does, Simon, Croft and Gardner courageously don’t just give you a sloppy funny drunk. Evy reverts to her too familiar pattern as a self-disgusted flame thrower leaving a scorched earth behind, shoving away any attempts to salve her pain by savaging the weaknesses of those close to her. It’s not a spoiler to reveal of a 1970’s mainstream Broadway “comedy:” The finale is pre-ordained and it’s not one that O’Neill would have written.

Croft as usual drives deep into the guts of a work and moves this talky play along smoothly. She and her cast triumph at making these three deeply flawed people likable enough that we feel compassion. Even when Gardner’s Evy is almost vicious betraying everyone’s trust, the audience still roots for her and is crestfallen as she sinks lower and lower.

It’s hard to overstate how tough the role of Evy is and how well Gardner conquers it. Any actor will tell you how difficult it is to naturalistically portray a simple drunk and how nearly impossible to credibly portray an out-of-control alcoholic in full rage.

But Gardner and Croft convincingly ease into the descent. Gardner’s first scenes depict a woman gingerly walking a quivering tightrope with the full awareness that a misstep means tumbling into a pit that she might not be able to escape. She has few illusions left, so her pained face shows she’s expecting disaster at a moment.

But when Evy/Gardner unleashes her extended slash and burn tirade, it’s carefully built with tidal ebbs and flows. Gardner makes it clear that Evy’s reliance on liquor is not so much anesthetic as a way to clear the path to self-hating self-destruction.

Hamilton uses her own lovely visage as the foundation of a Toby who, like Willy Loman, cannot understand how the verities of “beauty triumphs” that society has encouraged have failed as her marriage disintegrates. Hamilton loosens a lifetime of resentment and anger in a long aria about the prestige of the many men she has seduced and bedded in her life – still leaving her with zero self-esteem and nothing to show for it.

Another veteran actor-director, Bruce has never been better locally than as the unshakably loyal friend realizing that his stalled career may be all he can look forward to.

Tortoledo is a recent FAU grad who was a Harlette in Island City Stage’s Bette and Barry: From Bathhouse to Broadway. She, too, has a tough-to-buy role as the daughter desperately needing a mother who has let her down so many times before. But she succeeds in making Polly’s devotion believable when logically she’d cut her losses.

Seth Trucks is the physically and emotionally abusive lover whom Evy masochistically returns to for more abuse. Joey de la Rua, who was fine in New City Players’ Art, keeps the 1970s Anglo stereotyping to a bearable level as a Hispanic delivery boy who can’t be duped by customers’ dodges.

The play ran a respectable 193 performances on Broadway, but was never a hit. Star Maureen Stapleton, a legendary alcoholic herself, won a Tony Award for the part.

Nobody wrote brittle sophisticated humor as well as Simon. But the script suffers from a couple of insurmountable flaws. One, we never get a clue what demons forged these three’s dysfunctions. Two, the final resolution is, at best, a reaffirmation of Simon’s belief in the redemptive power of love. But it seems a cop out, as if the equally shattered Tyrones in Act 4 of Long Day’s Journey Into Night all went into the sunset arm-in-arm as mother Mary committed to conquering her morphine habit.

Primal Forces once again proves it is one of the most under-appreciated companies in the region. With tiny budgets and small casts, Croft and producer/director Keith Garsson have presented five seasons in five venues that have challenged audiences to think and feel. Most titles provided central roles for women. Quality-wise, the last seven consecutive shows have been memorable: Communion, An Accident, The Pink Unicorn, Breadcrumbs, Having Our Say, Blonde Poison and now this offering. There have been head-scratchers, but generally, anything this company presents is worth taking a chance seeing, even when you haven’t heard of the play before.