‘Cowboys’ Confessions Tells Of Magic City’s Not So Golden Days 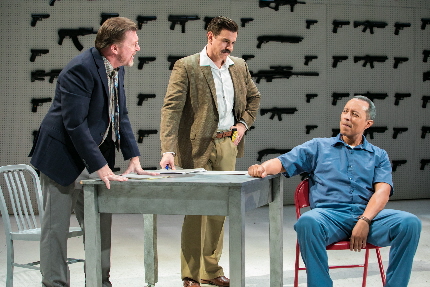 There are plenty of guns in Miami New Drama’s Confessions of a Cocaine Cowboy. In fact, there’s a whole back wall of them. Ratatatat is heard in the beginning, then blood spatters on the wall. The disturbing ending has a small boy directly pointing a gun at the audience.

I’m not giving away any spoilers to the world premiere play, based on Billy Corben and Alfred Spellman’s documentary Cocaine Cowboys. Just offering fair warning in these days of mass shootings and the hyperactive feeling that’s pervasive locally since Parkland. But you’re also comically cautioned in the beginning of the show by a voiceover speech which advises plenty of gunfire, strong language, violence, blood, and, yes, strobe lights, all packed together under one umbrella. And, the booming voice tells you to be advised that there will be other Florida F@#$%$ery. It’s meant to take the edge off the gun stuff.

Corben co-authored this world premiere with South Florida playwright, reporter, and television writer Aurin Squire. It has that television drama, CSI vis-a-vis Law and Order, feel to it. In fact, Squire is co-producer on the CBS legal drama The Good Fight, and it is an influence for sure. The play keeps a documentary undertone, as well.

The play culls from more than a thousand pages of depositions given by Jorge “Rivi” Ayala, a hitman suspected of 35drug-related slayings, ordered by queenpin Griselda Blanco, a.k.a. La Madrina, the Cocaine Godmother. You get the drift. How about a sequel, Miami New Drama? La Madrina. The play surely peaks your interest on the Queen of Narco Trafficking.

So we have Ayala laying out what was happening in the shoot ’em up days in Miami, when Time magazine published its expose in 1981 under the headline Paradise Lost, when the city was rampant with drug-related homicides. One small fact left out of Corben’s script was that the murder rate soared so high that the county had to rent refrigerated trucks to house all the bodies.

The set design by Christopher and Justin Swader is stark white. Banker’s boxes line both sides of the set, no doubt signaling those mounds of depositions. There are also larger silver-covered boxes – containers possibly filled to the brim with kilos of the white stuff. But no refrigerated morgue trucks.

Anyway, we meet Ayala as he is in the clink serving life sentences for a few of the murders he committed. Not all of the three dozen, just some of them. Yancey Arias is Ayala, and he keeps the exposition going with an approach to the character that has a kind of “well, I did this, but this is why I had to.” If this play has legs, and it could, no doubt whatever actor plays Ayala will want to study how Arias created him. “Rivi” was a charmer in real life, and Arias has it down. The actor has depth, and oh so good comic timing.

The construct of the play is that a filmmaker is there to shoot a documentary about Rivi. And he has a lot of story to tell as Corben and Squire’s script relies a lot on “telling” — expository storytelling with a wee bit of action thrown in. Perhaps in time as the new play finds its footing, they will strip out some of the “let me tell you what happened to me,” which makes the play rather talky, and causes some lagging spots here and there.

Director Michel Hausmann does a good job in creating action by moving the actors around and using the entire space of the Colony Theatre. At one point, Rivi and his family are in the back of the theater, higher up in the balcony. The idea is that they are watching a movie together when one of Griselda’s boys shows up to tell him he’s gotta go. At another point, while two detectives are expounding about their backgrounds, where they grew up, how they became cops, yada, yada, Arias’s Rivi bellows from the stairs of the Colony: “You done? I almost forgot I was in this show!”

Stephen G. Anthony, a regular on South Florida stages, and beyond, plays Anglo cop Sgt. Al Singleton, a military veteran from Ohio. He’s the yin to SoFla actor Nicholas Richberg’s Raul Diaz, who spars with Rivi over their Hispanic differences. They are the Crockett and Tubbs of Confessions.

Zilah Mendoza plays queenpin Griselda Blanco with a “don’t screw with me attitude or I will cut you, well, shoot you.” And, yes, there are shades of Eva Peron in Blanco, and even the script tips to it when the sight of Blanco with her arms outstretched causes Rivi to start singing “Don’t Cry For Me Argentina.” A good comic moment.

The script slickly has Mendoza playing dual characters, which sends an interesting message. The actress playing Black Widow Blanco also does a few quick changes and is a shrewish Miami-Dade State Attorney Katherine Fernandez Rundle. Rundle is still the Miami-Dade State Attorney and the portrayal here isn’t pretty. Kathy, as they call her here, has not once charged a police officer for an on-duty killing, Confessions reminds us. From what Confessions paints of Kathy, she’s kept her place in politics through her bloodline. Her father was Carlos Benito Fernandez, the first Hispanic judge in Miami-Dade. Rundle succeeded Janet Reno and she’s held the same office since. Griselda Blanco is portrayed in a much softer light than Rundle here. If Blanco is the Black Widow, Corben’s Rundle is the Black Witch. There’s an ax to grind and it dominates the second half of the show.

Lex Liang has the most fun with Griselda’s costumes, especially her flowing white, low cut jumpsuit and big hat. Alan Edwards’ lighting design gets its inspiration from the starkness of a prison and the snow white of cocaine. Original music in the show is by Salomon Lerner.

Corben and his Rakontur film company’s Cocaine Cowboys documentary has gotten a lot of mileage. Released in 2006, there was a sequel in 2008 and then a “reloaded” version in 2014. Now we have the stage reboot. Audiences will enjoy the local references and the nostalgia of what Miami was like then, still known today as a city that was built on the backs of drug lords.

Miami New Drama is bringing works to Miami that are provocative and fresh, and in the confines of the historic Colony Theatre, there’s something magical about seeing a play homegrown in the Magic City. Here’s hoping there’s enough interest in the days of Paradise Lost for Confessions of a Cocaine Cowboy to have a life beyond Lincoln Road.