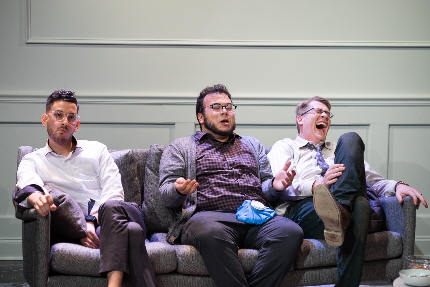 But is it Art? These three can’t or won’t agree in New City Players’ Art / Photo by Ryan Arnst

Perception and how we perceive each other and the world around us has taken an interesting turn in the 21st century. Which is what makes Yasmina Reza’s contemporary classic, Art, still so relevant.

Almost 25 years ago, the one-act play opened at the at Comédie des Champs-Élysées in Paris.  And then Christopher Hampton came along two years later, in 1996, and translated it into English. It ran on London’s West End for eight years, where Albert Finney, Tom Courtenay and Ken Stott cemented the characterizations of three guys whose friendships are tested over a painting.

The white canvas, at the center of Art, is about five feet by four, and the background is white, but, depending on how the light hits it, or how one looks at it, there are some fine white diagonal lines.

The modern dramedy played on Broadway for 600 performances, opening in 1998, picking up a Tony Award for Best Play, and starring Alan Alda, Victor Garber and Alfred Molina. The Tony wasn’t the play’s first award, and Art was the first dramatic work to win the Triple Crown of the modern stage – the Moliere in Paris, and the Olivier in London.

Reza’s play focuses on that stark painting, but read between the lines, and you’ll see it’s less about the painting, and more about personalities. So, here’s the plot: One of the trio, Serge (Ryan Maloney), a dermatologist, has spent $65,000 on an all-white painting by an artist named Antrios. He invites his friend, Marc (Timothy Mark Davis) over for an unveiling. Marc is stunned. It’s a piece of crap, Marc almost immediately tells his proud friend. But who is to say what is crap and what isn’t. Maybe their friend Yvan (Joey De La Rua) can settle the debate. Trouble is, Yvan is a waffler, never settling on his own opinion, never wanting to create conflict, which is bubbling up in his life outside of his two friends, too. He’s just started a job at his soon-to-be wife’s uncle’s stationary shop. Catherine, his fiancée, is in the final throes of wedding planning, and there’s a scrape afoot over whose names will be on the invitation.

There’s something refreshing about New City Players’ interpretation of this dramatic favorite. For one, the casting has been usually relegated to middle aged actors – Finney and Alda types, so there always seemed to be a midlife crisis afoot. Reza doesn’t commit to older actors in her script; she says they can be anywhere from their 30s to 50s, but probably because of the success of the aforementioned heavyweights, directors have a habit of skewing casting holder.

But the three guys in NCP’s Art are obviously thirtysomethings, which adds a whole other layer of complexity to Reva’s already deep character studies. Maloney’s successful dermatologist Serge could be buying the painting perhaps to show his upward mobility, for instance, and De La Rua could be the slacker next door who has found himself having to get married, get a real job, and join the rat race. Davis’s Marc seems trapped in his life as he ingests handfuls of his wife’s homeopathic medicines – is it symbolic of how she has him confined to married life? And, although seems proud of his job as an aeronautical engineer, does he feel stuck in that career, too? “The older I get, the more offensive I hope to become,” he says to his friends.

Something that has made Art such a choice play is that the three roles are equally challenging – and good actors and a smart director can make sure that each of them have distinct and singular personalities, and here they do.

You’re bound to see some part of yourself at one time or another in one of the characters, and it’s a true testament to the understanding of the work, and to Davis, Maloney, and De La Rua for making each character come alive with idiosyncrasies. Davis’s Marc who needs to be in control, and who finds that these friendships are about the only thing he believes he can control; Maloney’s metrosexual Serge, who has put himself on another societal level with his purchase of the chic painting – he now has a prize that is usually elusive to the average person, and De La Rua’s oh-so neurotic Yvan, whose non-stop, harried monologue after he bursts into Serge’s apartment 40 minutes late for guys’ night out, elicits a round of applause from the audience for the actor’s uproarious delivery.

Schulte has added another creative comic element that gets plenty of laughs. Reza calls for a single set, where the scenes unfold, successively, at Serge’s, Yvan’s and Marc’s.  “Nothing changes,” Reza instructs, “except for the painting on the wall.” NCP’s production adds a white-gloved set changer (assistant stage manager Johnny Contini), who arrives to change the painting and add bowls of nuts, and a book, to the living room’s coffee table. He changes the painting that hangs on the room’s rear wall, plumps up a couch pillow or two, and then staunchly marches off. He’s void of emotion in between scenes, completely in contrast to the firestorm of emotions raging between the three characters when they are onstage. This addition adds a cohesive thread that never interrupts the action, and contributes to the overall atmosphere.

New City Player’s creative rendering unfolds piece by piece, almost how a painting might come together; the brushstrokes are the true colors of personality revealed in emotional conviction.

In the lovely confines of The Vanguard, Art comes to life in NCP’s finely curated production.