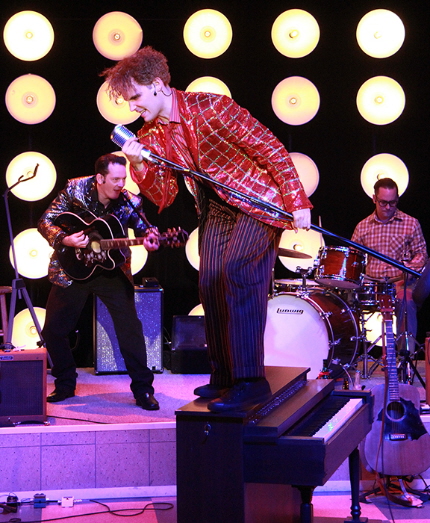 It almost should go without saying that the rock ’n’ roll blisters the paint off the walls of Actors’ Playhouse’s balcony theater in its thoroughly satisfying edition of Million Dollar Quartet. More on that later.

But near the end, a blown up snapshot depicts Elvis Presley, Carl Perkins, Johnny Cash and Jerry Lee Lewis playing together at the actual 1956 impromptu jam session that the musical is based on.

Beneath and beyond the 2016 performers’ often kick-ass delivery, the production depicts a different kind of snapshot in time: a moment when rock ’n’ roll was stumbling out of its adolescence. Its innocence as a labor of love was evaporating as success and fame were transforming something purely joyful into an art form that doubles as a lucrative business proposition.

Sun Records founder Sam Phillips — one of 17 people credited as the father of rock ’n’ roll – ponders aloud as the lust for lucre eats away at his empire. He recalls that sometimes in the wee hours after a recording session was done, he would remain in the booth replaying the tapes and think, “This is where the soul of a man never dies.”

Intriguingly, bookwriters Colin Escott and Floyd Mutrux underscore this by catching Phillips’ four famous and soon-to-be-famous mentees at various stages of that arc: Presley, the truck driving country boy settling into and yet deeply unsettled by a meteoric trajectory; Perkins, a virtuoso guitar player jealous that his one major hit to date has been coopted by his one-time bandmate; Cash, a quiet if genial soul just beginning to see success and realizing that Phillips can’t take him any further; and Lewis, a cocky madman-maverick looking for his first break – any break.

And while the first three know they would be nothing without Phillips’ commitment, molding and personal investment, their formal relationships with the producer-promoter are invisibly eroding. Phillips sold Elvis’ contract to RCA to solve a cash flow problem and the other two stars are thinking of moving on, even as Phillips is trying to hold on to them, All of them, even Elvis, are just boys from the same sharecropper fields of Mississippi, Alabama and Louisiana — hungry comers who are not ungrateful, just understandably ambitious.

None of these thematic and dramaturgical virtues would matter – in fact, the script has debilitating flaws – if Arisco had not hired a cast of eight actor/musicians who simply raise the roof on and off all night.

Wisely, no one is trying to do Vegas impersonations although the four leads do, indeed, sound and vaguely look enough like the icons so as not to be distracting.

But they and the entire cast deliver the goods on 23 numbers which reflect the range of rock roots from the seminal “Blue Suede Shoes” to the country “Ghost Riders in the Sky” to the gospel “Down by the Riverside” to the rebellious sexy “Great Balls of Fire.”

Eddie Clendening has the recently-minted phenom Elvis’ insolent smoldering charisma. Sky Seals with a basement baritone-bass exudes Cash’s thank you, ma’am gentility with something darker underneath. Jeremy Sevelovitz, a fine guitarist, captures Perkins’ frustration and fear of the possible evaporation of a success that rescued him from behind a plow.

In the flashiest role, Miami native Dominique Scott is on fire as the unbridled force of nature Lewis, a hungry young creature mischief maker percussively attacking the keyboard with manic passion. With his face contorted by the power of the music, he physically does everything but backflips including standing on the piano bench and dragging his foot along the keyboard. Scott is unrecognizable from the idealist brother in Actors’ Playhouse’s Ragtime and the rock wannabe in the national tour of Rock of Ages that played the Arsht.

It needs to be underscored that these four are playing their instruments live, supported by the rock steady drums of Andy Davis and the wildman antics of Adam Egizi who climbs all over and under his standup bass.

It doesn’t hurt that all four have played their parts multiple times before. But credit is due musical director Manny Schvartzman with Scott as assistant musical director.The blending of these musical talents is always obvious, but no more so than on the nearly a cappella rendition of the moving “Peace in the Valley.”

Jim Ballard doesn’t get the chance to use his fine baritone much as Phillips, but in this production more than others we’ve seen, Ballard’s Phillips is the glue that holds the show together. It’s Phillips’ passion and anguish at a crucial juncture in his business career that provides the narrative drive for what is meant to be more than a greatest hits revue. 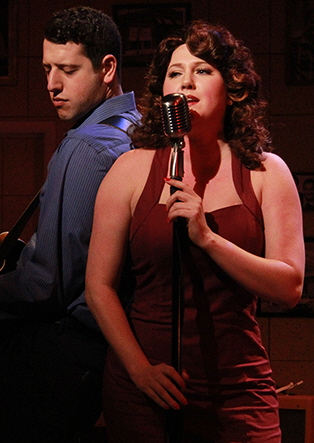 Finally, Lindsey Corey steals the show as Elvis girlfriend du jour who scorches everything in sight with “Fever” and “I Hear You Knocking.”

It’s not a perfect show. The book scenes don’t always land well. The script valiantly struggles sliding in biographical details and exposition, but much of the time it feels mechanical, manipulative and clunky. The winking humor breaks the fourth wall that is otherwise up there all night such as Elvis bemoaning his first gig in Vegas and noting he’ll never play there again. And since the truth of that night’s thematic aftermath is not as uplifting as a playwright might choose, the show ends with a Mamma Mia-like encore of rousing “well, you gotta play that one” hits including “Hound Dog” and “Whole Lotta Shakin’ Going On.”

The technical folks have done solid work again, from Shaun Mitchell’s flawless sound to the convincing recording studio by Gene Seyffer whose acoustic tile walls are adorned by Jodi Dellaventura with gold records and hall-of-fame publicity photos as well as the period equipment inside the sound booth.

Actors Playhouse is laying a major bet with this entry. Most subscription houses have little or no ability to extend a successful performance because their one auditorium is scheduled for their next days for another show. But since the Playhouse has two performance spaces, they are hoping that a growing word of mouth among Boomers and Millennials will allow them to run this show – with its six actor/musicians and single set —  through (at least in theory) New Years’ Day. 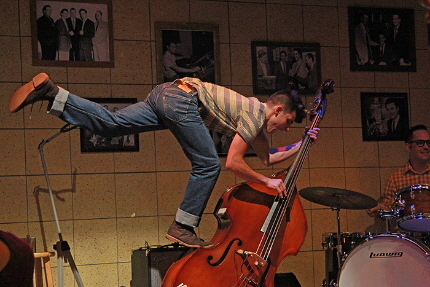