Rockin’ Memphis Has The Rhythm and The Blues 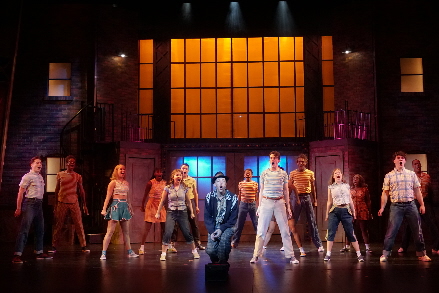 Sure, it’s only rock ‘n’ roll, as the saying and song go. But rock might have become pale and anemic if it hadn’t had a heavy infusion of R&B—the same foundation in Memphis the Musical, getting a full-bodied (or full-blooded), energetic production by the Slow Burn Theatre Company in the Amaturo Theater at the Broward Center For The Performing Arts.

Tight choreography, outstanding leads, a solid supporting cast and a fluid band infuse Slow Burn’s trip to Memphis. The rousing production hits the ground running in the opening scene set in a black nightclub in Memphis’ Beale Street area and doesn’t slow down until the last “Na, na, na, na” of the ovation.

Along the way are some terrific songs that capture the spirit of 1950s rock and R&B and puts it in the context of the racial relations of the times.

Huey Calhoun, winningly played by Brian Golub, is the definition of loser. He can’t keep the most basic of jobs and has little ambition—not even the ambition to know what he wants to do in life. He does have one passion—R&B music and he desperately wants the world to listen. His passion draws him to Delray’s, a black dance bar down on Memphis’ Beale Street. Huey is the only white person at the bar and the regulars immediately start to leave until he talks about the music. Huey may be a bit of a hillbilly, his father definitely was a racist and his mother Gladys (Shelley Keelor) isn’t much better. But Huey only sees—and hears—the music, which he expounds in the heartfelt “The Music of My Soul.”

Huey knows that if the teenagers of the early 1950s could only hear the music he loves, they also would be fans. About to be fired from his job as a stock boy at the local department store because of his incompetence, he has one last chance—sell five records and he can have a job in sales. He doesn’t sell five—he sells 29 records in five minutes. But he’s fired anyway because the store owner doesn’t want “race” music played at the store.

Huey is smitten with Delray’s sister, the talented Felicia (a strong portrayal by Khadijah Rolle) whom he vows to get on the radio. Huey finally lands a DJ job with WHDZ by proving to station owner Mr. Simmons (Matthew Korinko) that R&B and rock are the future of music. Huey is right and the music hits the right notes with the teenage listeners, Along the way, Huey will finally find his place in Memphis, becoming one of the area’s most popular disc jockeys and, eventually, the host of a TV dance show before derailing himself and sabotaging his relationship with Felicia.

Squirrely, a bit smarmy and twitchy, Golub is the perfect Huey—the sad sack with a hang-dog look, an illiterate social misfit. Golub makes the audience root for Huey, despite his flaws and, even as we know that he eventually will implode and sabotage everything he has ever wanted. Golub finds his character’s humanity. Huey doesn’t endear himself with his cluelessness about race relations in the early 1950s, how his recklessness might court danger to those he cares about or being blind to his arrogance that comes with his success. But his actions are understandable, and Golub keeps us on his side.

Golub is well matched with the sultry Rolle and her fireball voice. Her “Colored Woman,” “\ Love Will Stand When All Else Falls” and “Someday” are searing standouts, ablaze even in the tender songs. Rolle’s Felicia knows who she is with ambition that goes beyond the walls of her brother’s club and the city limits of Memphis. A graduate of New World School of the Arts, Rolle will be most welcomed back.

The growing relationship between Huey and Felecia feels real, beginning with “Ain’t Nothin’ But a Kiss.” Huey is the romantic and Felecia the pragmatic, knowing they could have a better life together away from Tennessee. When racism rears up with violence, it’s expected but still surprising, though its horrific aftermath seems more like a footnote than a character changer.

Dante J.L. Murray shows his acting and singing chops as Delray. Murray portrayed Kerchak in Slow Burn’s Tarzan and was recently Judas in Pembroke Pines Theatre of the Performing Arts’ Jesus Christ Superstar, but Memphis shows off his talents and his rich voice even more.

As Gator, silent since he saw his father lynched, Darius J. Manuel breaks out with a show-stopper of a performance with his anthem against racism “Say a Prayer.” As the janitor Bobby who transitions to Huey’s TV show, Brian Maurice Kinnard lets loose with moves Elvis Presley only wished he’s had in “Big Love.”

Korinko and Keelor never fail to deliver solid performances and they each excel at their supporting but vital roles.

Director and choreographer Patrick Fitzwater never misses a beat in keeping Memphis a cohesive production, from the brisk scene changes to the dynamic dancing to the effective emotional scenes between Huey and Felecia. Keep an eye on those dancers—a cohesive troop and, yes, there are standouts such as Jerel Brown (who doubles as dance captain); Elijah Word (who also portrays Wailin’ Joe and Reverend Hobson): Andre Russell, Sara Grant, Victoria Anderson and Nicole Kinzel.

And many, many compliments to musical director Michael Ursua who proves why a live band—especially one this strong—enhances a production.

Scenic designer Michael McClain makes the most of the stage, giving each scene an intimate feel. The radio station call letters WHDZ and faux neon Beale Street bookend the stage on which the nightclub, disc jockey booth and domestic scenes easily move in and out.

Memphis is loosely based on Memphis disc jockey Dewey Phillips, one of the first white DJs to play black music in the 1950s. The show ran on Broadway from Oct. 19, 2009, to Aug. 5, 2012. It won four Tony Awards in 2010 including best musical, and composer/lyricist David Bryan (of Bon Jovi fame) and book/lyric writer Joe DiPietro (I Love You, You’re Perfect, Now Change). Based on an idea by producer George W. George, the show evolved through several regional theaters over several years before coming to New York under director Christopher Ashley and choreographer Sergio Trujillo, reported my colleague William Hirschman.

I saw the Broadway Across America tour of Memphis the Musical several years ago the Arsht Center. But Slow Burn’s version pulsates with a beat that doesn’t end. If most of the audience didn’t stand up and sing along as the curtain calls were beginning, it’s because we were so entertained we wanted Memphis to go on.

Memphis the Musical presented by Slow Burn Theatre Company runs through April 8 at the Amaturo Theater, Broward Center For The Performing Arts, 201 SW 5th Ave., Fort Lauderdale. Performances are Thursday through Saturday at 7:30 p.m., Wednesday, March 28, at 1 p.m. and Sunday at 2 p.m. No show April 4. Running time about 2 hours 30 minutes including one intermission. Tickets are $47-$60. Call (954) 462-0222 for tickets, at www.browardcenter.org or #Ticketmaster.com; in person at Ticketmaster outlets or the Broward Center’s Auto Nation Box Office. Info at www.slowburntheatre.org 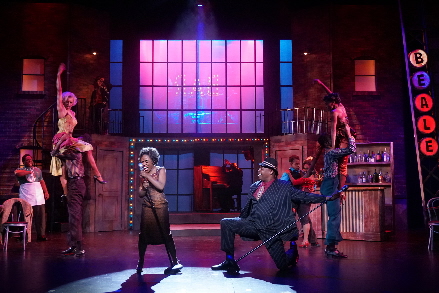 2 Responses to Rockin’ Memphis Has The Rhythm and The Blues