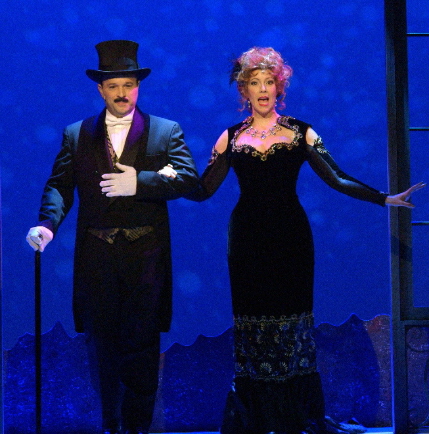 Despite the title and the timing, the chamber musical Romance, Romance is not so much saccharine as bittersweet. In two playlets set in separate times, locales and social strata, we see true love briefly blossom but ultimately surrender to socially-sanctioned cynicism or fidelity to an existing marriage. Slow Burn Theatre Company has found the groove connecting the two disparate pieces in which love is precious but doesn’t always prevail.

But the evening is not a dispiriting downer. The score by Keith Herrmann and book and lyrics by Barry Harman is suffused with such tenderness, charm, drollery and compassion for human frailty that simpatico audiences have been won over since it bowed off-Broadway and then Broadway almost 30 years ago, and become a staple of regional and community theaters.

The first half, The Little Comedy, is based on a short story by Arthur Schnitzler (La Ronde) and is set in the drawing room upper class of 19th Century Vienna. Alfred Von Wilmers (Korinko) is a wealthy, handsome rake of a playboy. Josefine Weninger (Hodos) is a lovely well-heeled urbane woman-around-town. Both flit from shallow relationship to relationship motivated primarily by a losing battle to avoid boredom. Most of the ensuing tale is sketched out in letters each write to their best friends and the depiction of what is being described.

On a lark, they pose – unknowingly to each other – as an impoverished poet and a milliner. Almost immediately, sparks turn to passion. They believe correctly that the other has fallen in love with the real person usually hidden underneath the brittle veneer of sophistication and wealth. But based on their past transient affairs, neither has the belief in their own worth as someone to be loved nor the existence of true love. They believe the halcyon relationship is doomed when the truth comes out, as it must.

The second act, Summer Share, is based on Jules Renard’s 1898 play Le Pain de Ménage reset in the Hamptons and updated by Slow Burn from 1987 to the 21st Century. Two thirty-something couples are vacationing in a seaside cottage. Sam (Korinko) is married to Barb (Sessa), while his platonic best friend of many decades Monica (Hodos) is married to Lenny (Westrich). After their spouses have gone to bed late one night, their long-suppressed attraction blossoms into the possibility of an affair. While the friends yearn for something fulfilling, the spirits of their spouses watch, comment and sing comic songs of anxiety.

Both halves of the show are shot through with humor: Oscar Wilde/Noel Coward wit in the first half and a more vaudevillian sensibility in the second. But there is that faint sadness as well, with the sense that neither of the central truer relationships have a future. The music of the first half is lively like a period operetta; the second half of the score has a pop sensibility, both acts encompassing plaintive numbers as well. All of it delivered digitally by musical director Manny Schvartzman who molded the singers’ performances.

When Hodos, blessed with one of the best musical theater voices in the region, sings of “The Night It Had To End,” Josefine’s anticipatory imagining of the unavoidable breakup, the audience’s heart cracks along with hers. When Korinko’s Sam croons a benediction about the need for cherishing imaginary romance in order to live with imperfect real-world relationships in “Romantic Notions,” the sense of forgiveness is uplifting.

Crucially, these actors create charming affable characters who we not only like but cheer for even though they are flawed and to a degree are prisoners of those flaws. While most the attention focuses on the leads, Sessa and Westrich once again lend their superb voices and acting skills to the supporting parts in both playlets.

Slow Burn actually premiered this work last week in a very short run at the Crest Theatre in Delray Beach, is currently mounting it at the Broward Center and will move it next month to the Aventura Arts & Cultural Center. That makes Slow Burn the only theater troupe presenting in three counties in Florida.

Romance, Romance from Slow Burn Theatre Company runs through March 6 in the Abdo New River Room at the Broward Center, 201 Southwest 5th Avenue, Fort Lauderdale, at 7:30 p.m. Thursday–Saturday, 3 p.m. Sunday. Tickets are $45 online at BrowardCenter.org or Ticketmaster.com; by phone at 954-462-0222; in person at Ticketmaster outlets or the Broward Center’s AutoNation Box Office. Starting one hour prior to the performance and during intermission, sandwiches, salads, snacks and desserts are available for purchase. A full cash bar is also available. The show moves March 10-13 to the Aventura Arts & Cultural Center, 3385 NE 188th Street, Aventura. For more information, visit www.aventuracenter.org/events/detail/romance-romance-aventura

One Response to Slow Burn Show Is Bittersweet Musical Of Romance, Romance