Posted on February 4, 2020 by Bill Hirschman 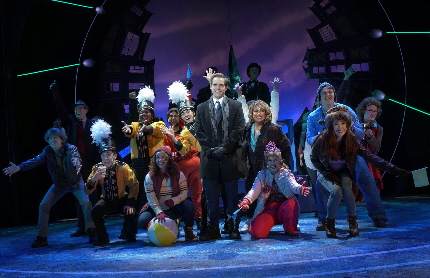 The third thing to know is that it doesn’t matter. At all. This unapologetically uplifting, deeply poignant and very funny version is well worth seeing over and over – and over – on its own terms.

We admit to a little bias. We loved the multi-million-dollar production when it played a criminally-brief run on Broadway in 2017, and we told Slow Burn artistic director Patrick Fitzwater that it seemed like a Slow Burn kind of show, even with their smaller budget.

But such recommendations are fraught with disappointment, not the least of which when someone takes you up on it. So imagine our relief that this is as strong as production in its own right as anyone could ask.

Even on film, the saga of cynical weatherman Phil Connors covering the annual celebration in Punxsutawney had a backhanded heartfelt third act about the resurrection of compassion and humanity. But the musical, and especially Slow Burn’s edition, make that the core of the entire evening even though it certainly begins with all the condescending snark that its hero can muster and delivers plenty of gentle laughter.

In this version, as Phil changes slowly phase-by-phase, the audience goes through the awakening alongside him. It’s never sappy but the show is not afraid of genuine sentiment.

Of course, the linchpin is casting and Slow Burn has presented the audience a gift in two of the best musical theater performers in the region: the supremely comic Clay Cartland as Phil, and the radiant Kimmi Johnson as his producer and potential love interest. More on them later.

In case you somehow missed Harold Ramis’ 1993 film, Bill Murray portrayed Phil Connors as not just a jerk but a nasty a—hole of a weatherman covering whether the titular creature will make an appearance in the provincial Pennsylvania town. Even when Connors sees the error of his ways, that snark embedded in actor Murray’s DNA assured the audience not to take his metamorphosis too seriously.

But Danny Rubin who wrote both this perfectly-constructed script as well as the original screenplay, plus composer-lyricist Tim Minchin (Matilda the Musical) quietly aim for the heart while making you laugh – subtly invisibly easing from one vibe to the other.

They also take advantage of the premise – that Phil wakes every morning back at the exact same Groundhog Day and reliving its events – to gently explore more intriguing questions: would you perfect your life if you could relive it, what do we lose by racing through life and not stopping to appreciate the experiences and people we ignore, what would you do if you could not die, what  is the real worth of any community, on and on. Indeed, the through-line theme of this show is we must savor life. All these concepts are not posed bluntly like some movie of the week moral or lectured about didactically, but woven into the fabric of a light comedy.

The incessant replay is both a curse and a blessing: Phil cannot kill himself, he can bed anyone he wants with no commitment, he can get roaring drunk and lead the law on a chase. But after a while, that freedom becomes soul-numbing. Nothing makes a difference in changing the ultimate reawakening every day in the same bed. It’s quite existential until Phil realizes that he has been given an opportunity to enrich his life.

One way the show charts Phil’s change is his attitude toward the populace. This is a sweet little town where people wear bright ski jackets, colorful hats with ear mufflers and someone dresses up in a groundhog costume. Phil dismisses the residents as quaint naïve rubes worthy only of poorly-concealed derision. Indeed, the show initially depicts these folks as caricatures just as Phil sees them. They open the show singing a bland ditty of optimism: “Tomorrow spring will come and then / there will be blue skies my friend / bright eyes and laughter / tomorrow there will be sun / but if not tomorrow / perhaps the day after.”

But as the show progresses, he and we get to know them better (he has no choice); they gain depth and heart and genuine worth, although they act no differently than they did when we met them. They become distinct individuals with names, personalities and feelings to care about. And the lyrics of that song gather deeper meaning.

The intelligence and courage of the creative team to achieve this is highlighted in opening the second act. The orchestra opens up with a few seconds of classic Broadway entr’acte. But instead of sliding into some flashy get-your-attention-back production number, it slips into a solo character-defining ballad for the tertiary character, Nancy. She was pigeonholed long ago as the town beauty defined by her looks, a woefully underestimated “character” she says she plays and sadly has even accepted. But she longs for more, expressed poignantly with lyrics “It’s better to be leered at /than not desired at all /who am I to dream of better? / to dream that one day / I will be / something more than just collateral/in someone else’s battle / I will be /something more than Nancy.” The words and music are deeply touching and beautifully rendered by actress Leah Sessa.

Later, Ned Ryerson, the insurance salesman we have written off as a Babbitty buffoon played by the terrific Michael Scott Ross, reveals the persisting sense of loss over his dead wife, which not only shoves our condescension down our throats but forces a major change in Phil. And even later Ned sings of how we have to live in defiance of ever-present death. They force the audience – like our hero – to realize that these caricatured denizens are actually fully-realized people with fears and joys that we can all relate to.

Fitzwater as director and choreographer (there’s a tap dance for the entire community including the human-sized groundhog) understands the show’s melding of humor and sentiment. He also has led a corps of actors, designers and tech folks in producing a show that seems so simple other than a few slight of hands moments, but actually is incredibly difficult to pull off with lightning changes for everyone involved. This is reportedly the first professional regional production, so acknowledge Slow Burn’s achievement in crafting and solving the inherent challenges in this terribly complicated show.

The raw material’s only misstep are two production numbers that persist way past their dramaturgical need other than providing a comic interlude: Phil visiting a phalanx of weird doctors, and Phil getting drunk with two rednecks, then driving drunk with them to underscore his discovery that nothing he does has consequences. The latter does have a funny coda as puppets of sorts provide the audience with a bird’s eye view of the pickup truck being chased through the town by two police cars.

The live band led by musical director Anthony Campisi is unassailable, plus honor the large seemingly inexhaustible ensemble who throw themselves completely into each individual character.

A standing ovation is due production stage manager Jackie Lawlor, assistant stage manager Jessie Higgins, the spotlight operators and the backstage crew for mastering with what appears to be effortless but actually must be a Herculean task of a production that is always morphing in some facet or another.

Back to our leads.  Cartland’s wacky comic chops have been so obvious in a score of memorable performances that it has been easy for casual observers to miss that he can handle a much wider range of assignment. Even in his broader comedy, there are subtle depths of character and emotion (Remember his man turning into a slug in the musical The Trouble With Doug?)  His face is like a billboard for what he’s thinking; we can read every disappointment, every sneer, every wave of depression. He also has a strong expressive singing voice capable of handling Sondheim and Gilbert & Sullivan.

But this role gives him, maybe for the first time, a chance to depict the entire arc of a character’s development. He convincingly moves from contempt to confusion to anxiety to depression to a credible slow awakening that ends with a rebirth. Certainly, most of the time he is downright hilarious, especially as his aplomb comes unhinged in scenes playing and replaying. His innate charisma also keeps the audience invested in him during his less likable scenes.

Once again, Johnson brings an indefinable loveliness to the inner core of the women she plays.  Besides being willing to serve in a chorus, Johnson has in the past couple of years given us the shiksa girlfriend in Bad Jews, Medium Alison discovering her sexuality in Fun Home, the high school daughter in Freaky Friday, the snobbish law student in Legally Blonde and a few months ago, a to-die-for Fiona in Shrek.

On Broadway, the actress playing Rita was adequate, but Johnson, as with the aforementioned roles, makes Rita a modern three-dimensional woman with warmth and intelligence and a willingness to be lonely rather than link up with the wrong man. Johnson has a combination of expressive face and expressive alto/mezzo voice that makes her character’s inner life plain for the audience to see. Simply, her Rita glows. Just glows.

These are somewhat dark and depressing times for many people. But the lovely, energetic and energizing residents of Punxsutawney may be just what you need. 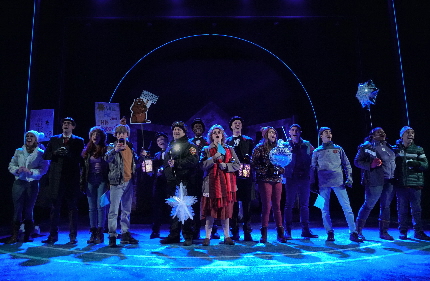