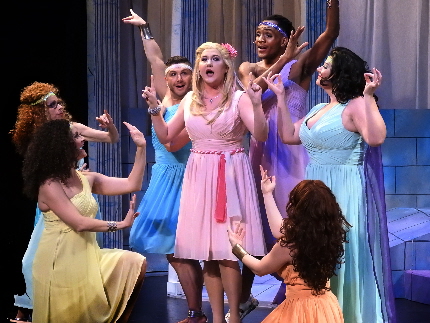 When the film Xanadu skated clumsily into cinemas in 1980, it’s hard to imagine its makers knew they were producing an epic turkey whose very title would occupy convenient shorthand for all the bonkers follies of the past and future. Aside from its winning soundtrack, the movie survives because of its head-slapping earnestness. A wink would have shattered the illusion.

By contrast, the stage musical, which supplements the sunshine-y disco songs of Electric Light Orchestra’s Jeff Lynne and Olivia Newton-John collaborator John Farrar with a tongue-frozen-in-cheek book by Douglas Carter Beane, is pure postmodernism, a self-aware celebration of its source material’s gargantuan imbecility. In a good production of Xanadu, the audience and actors alike are in on the joke, threading the needle between embedded sloppiness and performative polish. They’re winking, and at the same time they’re not.

This isn’t one of my favorite theatrical tones, but Slow Burn Theatre has certainly captured it in the company’s spirited, stupidly happy revival of its own 2012 production, which opened last weekend in Aventura and which will soon tour Delray Beach and Fort Lauderdale. To accommodate the needed flexibility, the set is a multipurpose Coliseum-like structure, and the music is played on tracks—but since it’s so cheesy and synthetic to begin with, you won’t miss live orchestration one bit.

Approximately half of the original cast from Slow Burn’s bushy-tailed days in West Boca lace up the four-wheelers once again. Rick Pena returns as Sonny Malone, the thick-headed California street artist in the throes of comically suicidal depression; Lindsey Corey is back in the plum Olivia Newton-John role as Clio, the leader of the Greek muses, who emerge from Sonny’s mural to inspire him to channel his energies into a roller disco; Larry Buzzeo encores as Danny Maguire, the slithery businessman who, thanks to his own smitten history with Clio, provides the warehouse for Sonny to realize his ambitions.

Conor Walton’s returning performance as the bubbly Thalia, the muse of comedy, joins the newly cast muses: Elijah Word’s Terpsichore, Sabrina Lynn Gore’s Erato and Emily Tarallo’s Euterpe. Also in their Xanadu debuts are Sharyn Peoples and Lissa Grossman Comess as the antagonistic muses Melpomene and Calliope, who scheme to unseat Clio from her leadership position by initiating a romance between her and Sonny—falling in love with a mortal, of course, being verboten in the academy of muses.

This folderol is, needless to say, not for everyone. A frankly surprising exodus of spectators greeted Xanadu’s Aventura opening night after about 30 minutes. Indeed, the show is not as funny as it purports to be: Wacky voices, kooky gesticulations and inside-baseball humor tend to substitute for original wit, and the juvenile story strains to fill 90 minutes of stage action. Beane’s best one-liner remains the mid-show summa uttered by a perceptive muse: “It’s like children’s theater but for 40-year-old gay people.” 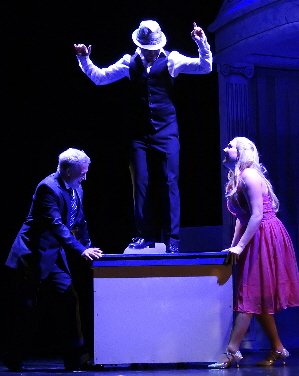 His choreography may be more comfortable than challenging—suggesting more upscale renditions of cheerleading routines and cruise-ship revues, often terminating in appropriately Grecian poses—but sass and innovation color its edges. In a highlight of the production, one I don’t recall from the 2012 Xanadu, Walton doubles as Danny Maguire’s tap-dancing avatar, cleanly hoofing atop a desk and elevating what would have otherwise been a cumbersome flashback segue.

Aside from the occasional line flub, there are no missteps among Fitzwater’s carefully curated cast. Walton and Word steal scenes left and right as the show’s two gender-bending muses—the former sparkly and fabulous, the latter faux-balletic and deadpan. Pena, who also designed the simple but effective collection of pastel, neon and Greco-Roman costumes, is a fine Sonny, playing him as an eager beefcake, a dim-witted but enthusiastic dreamer.

But it’s Corey’s show, just as it was Newton-John’s nearly 30 years ago. She’s a radiant presence and a comic dynamo, both as the angelic Clio and as Kira, the Australian-accented alter ego she creates for Sonny’s benefit. Her combination of knowingness and sincerity—of simultaneously living and satirizing each moment—anchors the production. Not for nothing, she’s also the cast member most at ease on rollerskates. So fluid are her movements you’ll forget she’s laced up for more than half the show.

I’d be perfectly content to never sit through Xanadu again, but with Fitzwater and Corey captaining a ship this talented, the 90 escapist minutes of leg warmers, togas and creaky in-jokes are as breezy as a summer vacation on Venetian (Calif.) waters.