Despite the raunchy discussion of every kind of sex, the flamboyantly omnisexual emcee, and, oh yes, the title – The All-American Genderf**k Cabaret – this irreverent satire sheathes a compassionate lament for the difficulty of forging meaningful relationships amid the sexual maelstrom of the 21st century.

Thinking Cap Theatre’s uneven production of Mariah MacCarthy’s in-your-face fantasia has serious flaws, but it’s also undeniably funny throughout its first act and occasionally touching in the second act as twentysomethings stumble about in the minefield of gender stereotypes and sexual expectations.

Set in a sideshow complete with funhouse mirrors that don’t reflect reality, the episodic Cabaret resembles the old Love American Style TV series melded with Saturday Night Live on an evening when the censors went to bed early. 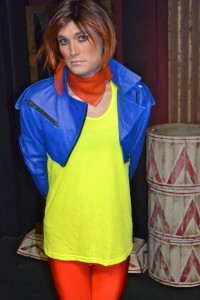 Noah Levine as Taylor the emcee

Transgendered emcee Taylor who favors spandex leggings and blue  leather introduces eight seeming stereotypes including the man-hating lesbian, the over-the-top hairdresser, the sensitive male, the tomboy, the chest bumping buddy, the club player, the woman who sleeps around, etc. etc. But the emcee interrupts collisions among the denizens to dish on the three-dimensional personalities beneath the shallow personas.

Each, including Taylor, is straitjacketed by mainstream society’s pigeonholing definitions. But as the nine mix and match during the evening, MacCarthy reveals them as lonely people longing to make connections. Notably, the physical couplings or attempts to do so usually get in the way, although the entire plot consists of carnal pursuits.  In fact, no one speaks the word “love,” let alone hopes for it, until the most unlikely couple off-handedly mentions it in the last scene.

Earlier, one man says to a woman he has had sex with, “I feel like I should apologize, but I don’t know why.”

The production and script have major flaws. It lasts way too long. Episodes are not acted or directed in a way that puts a definitive end to scenes. Some scenes such as dance breaks, while cute and imaginative, are extraneous. Some actors are a lot more vibrant and convincing than others, with the latter dragging down the pace of some scenes.

Still, director Nicole Stodard and her cast deliver the anarchic, droll style that MacCarthy was looking for. Stodard has also gotten some of the best work to date from several actors who have appeared in Thinking Cap’s other unconventional outings. Most effective were Christina Jolie Breza as a personal trainer who hasn’t had sex in 2 ½ years and Thinking Cap newcomer James Carrey as a thick-headed beau who eventually finds his way to a relationship. Also in the cast are Nori Tecosky, Danny Nieves, Desiree Mora, Andy Herrmann, Andrea Bovino and Arturo Sierra. Noah Levine gives the most indelible performance as the sardonic, flirty emcee who watches the human comedy with empathy emanating from his mascara-ringed eyes and a sensuous slash of downturned lips.

Much of the specific humor is unpublishable in a family newspaper such as when a feminist uses wry, coarse references to genitalia in her lecture to office Neanderthals about sexual harassment. MacCarthy also punctuates the play with melancholic grace notes. The supposedly loose party girl betrays her inability to deal with people when she says she has sex with virtually anyone because it’s easier than having to deal with explaining to a man why she doesn’t really want to sleep with him.

MacCarthy skips around a dozen buzzy topics from texting to date rape to post-modern feminism. But she occasionally digs deeper into the societal hypocrisy imprisoning the characters. One scene starts out as a predictable slam on homophobia, but in fact ends up exploring the simmering rage that gays feel at being perpetually victimized.

At its core, Cabaret is recommending a live-and-let-live philosophy that finds less worth in labels than true emotion.  As one character says, “Gender is not a two-party system…. It’s not black and white. It’s Technicolor.”

The All-American Genderf**k Cabaret runs through Oct. 13, produced by Thinking Cap Theatre, at Empire Stage, 1140 N. Flagler Drive, Fort Lauderdale. Performances  8 p.m., Thursday-Saturday. General admission $25, military and seniors 60 and over $22, students 25 and under with valid student ID $10. Reservations at www.thinkingcaptheatre.com or 954-678-1496. Cash only at the door.

A side note: Make reservations. Saturday’s performance is already sold out, a running trend last summer for shows at the 55-seat Empire Stage.