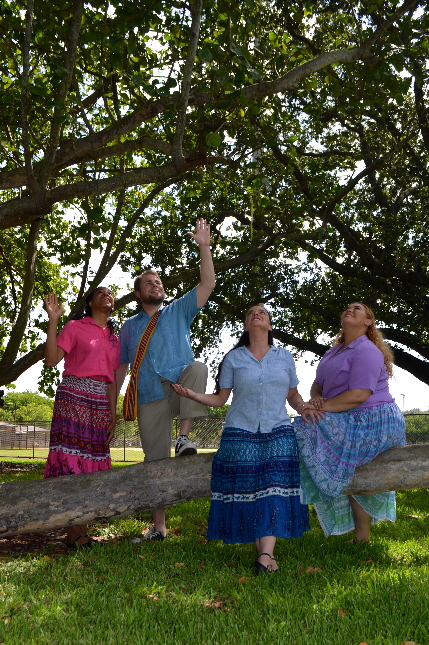 Sitting under a catering tent outdoors, sweating through the summer swelter, watching a faithful facsimile of an hour-long Christian travelling revival might not seem appealing fare to your everyday South Florida theatergoer.

But you’d be dead wrong. Thinking Cap Theatre’s regional premiere of Young Jean Lee’s play Church may not be everyone’s cup of sacramental wine, but bring an open mind and savor a thought-provoking, exuberant even entertaining evening.

Lee, one of Off-Off-Broadway’s up and comers, has created a different brand of theatrical endeavor. Specifically, Church does not make any overt commentary about faith or organized religion. It just presents Exhibit A, a neutral 3-D photograph of what devout faith looks and sounds like in the 21st Century. There is no character arc or plot or even a theme. It simply is.

That frees – and requires — the audience to participate in evaluating what they see through whatever lens or life experience they wish.

The company switches among a pastor’s folksy sermonettes, testimony of personal travails and succor by three other reverends on the program, and hand-clapping musical numbers from a choir and band.

Lee, producing artistic director Nicole Stodard and musical director Bill J. Adams have required their cast and musicians to invest completely in these evangelists who devoutly believe and want to share the joy they have found because of pure altruism.

The cast has not let them down. Not a single performer, no matter their personal beliefs, can be caught winking for a milli-second. They give themselves to their characters with the same kind of abandon that their characters have exhibited in giving their lives to God. The result washes the audience/congregation in a joyful and vibrant aura that you can analyze, question or embrace as you wish.

No one exemplifies that so much as Scott Douglas Wilson as Preacher Jose, the genial emcee and spinner of spellbinding modern parables. With a warm smile and shining eyes, Wilson has those gentle neighborly preacher talkin’-over-the-back-porch rhythms down cold. But that congenial exterior harbors a raging passion that can erupt without warning.

The tone carefully cultivated among the cast by Stodard and Lee is not one of smug paternalistic knowledge, but of passion. That passion is especially evident in the testimony of one of the beaming faithful played by Ann Marie Olson who relates her journey through a hellish past with her round eyes blazing. Similarly, Vanessa Elise delivers a brief but chilling tale that spills out of her mouth in a whitewater torrent of words that summon up insane surrealistic drug-induced visions. Carey Brianna Hart’s evangelist may be more conventional but no less convincing.

Stodard carefully builds the show as any director would from a laid-back get-together to an occasionally scorching crescendo.

Regardless of how it may seem, this is indeed a theater work written by a playwright. Lee has penned not just perfect copies of revival riffs, but has injected them with a writer’s love of language and imagery.

As far as evil, Lee and company acknowledge the hell on earth that exists for some people. But in the closest that Lee comes to tipping her own ambivalence, she has these people fall back on such tried and true stratagems as we can’t know what the Lord is up to, and especially, whatever we endure in this world is simply a transitory test for the glories to come.

Music is a key component. A 15-minute pre-show may be the most rousing kick-butt warm-up of any production this season including familiar tunes given an injection of rock sensibility such as “This Little Light of Mine” and a punkish vibe on “Over The Rainbow.” The entire cast has fine voices but “choir director” Sabrina Lynn Gore and Olson set the ad hoc congregation on its heels with their power and skill.

The choice of the piece is ironic – it is being held behind a former church at 1501 S. Andrews Ave. in Fort Lauderdale that Thinking Cap is currently remodeling into its new home dubbed The Vanguard Sanctuary for the Arts. Trouble obtaining building permits has slowed their occupancy of the building, but in a nice piece of serendipity this revival is being held on the church’s parking lot. Situated across the street from Broward General Hospital and down the block from the popular Tap 42 restaurant, the verisimilitude was helped out by the revving of nearby motorcycles and the quizzical stares of people strolling past, likely mistaking the goings on for a real revival.

No one can blame you for not being intrigued by the description of the show. But if you dress in loose clothes, bring a hanky to wipe your brow and use the hand fan provided with your ticket to cool off, you will likely be glad you took a chance.

Church runs through Aug. 24, from Thinking Cap Theatre performing behind the Vanguard, 1501 S. Andrews Ave., Fort Lauderdale. Performances 8 p.m. Friday-Sunday, 10 p.m. Saturday. Come at least 15 minutes early for the warm-up show. Running time one hour not counting the warm up. Tickets are $28 for general admission, $15 for students with valid identification. Call (813) 220-1546 or www.thinkingcaptheatre.com. In the event of a thunderstorm, the show will be performed nearby at Muse Center for the Arts, 99 SW 14th Street. Please call to confirm location change due to weather (813) 220-1546.