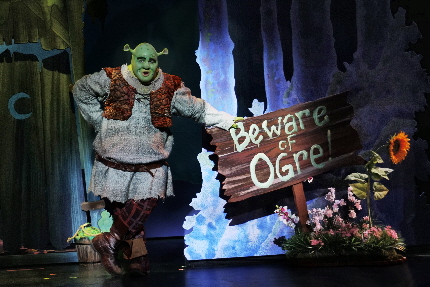 Already this has been an impressive theater season with Blanche and Stanley, a family dealing with an autistic adult, and a death row visit with John Wayne Gacy. But even Shakespeare knew that sometimes all theater needs to be is fun.

And Slow Burn Theatre Company’s Shrek the Musical is pure unadulterated fun, not just for youngsters in the audience watching familiar fairy tale characters cavort in atypical ways, or older kids enjoying nose-thumbing humor involving farts and belches, but also adults quietly enjoying the more sophisticated jokes, cultural references and gentle skewering of the unrealistic tropes they were raised on.

Slow Burn has earned a reputation for taking average to flawed work and infusing it with enthusiasm and imagination to produce their own productions that often are far more entertaining such as 9 to 5, Freaky Friday and Xanadu, or more effective than the originals such as Carrie and Titanic.

So once again, as they open their 10th season with their first Equity show, Slow Burn finds the joy in a musical which can be, frankly, just okay, and makes it an event worth going out of your way to catch.

Shrek the Musical is a popular piece based on the 2001 animated film (and 1990 children’s book) about a curmudgeonly ogre who lives in a swamp because he has been snubbed by everyone around him. When the reprehensible Lord Farquaad banishes all the fairy tale characters from Pinnochio to the Big Bad Wolf to the swamp, Shrek reluctantly accepts the aid of a talking donkey in a quest to rescue Fiona, a beautiful princess in a tower, as a potential wife for Farquaad. By this time, with two sequels and a spinoff film, most sentient human beings know the rest of the tale.

But when veteran playwright David Lindsay-Abaire (Rabbit Hole) and acclaimed composer Jeanine Tesori (Fun Home) and directors Jason Moore and Rob Ashford agreed to retool it, they came up with a wryer uninhibited piece with an even stronger underpinning of the message about people stereotyped as freaks and ther power of true love and self-image etc. The musical even more than the film has an unashamed message about acceptance, wrongly judging by appearances, and being proud of your differences.

They augment the humor of the film (Shrek admonishes his companion, “That’ll do, Donkey,” riffing on the film Babe) with scores of subtle and not-at-all subtle little gifts for the older patrons. The Gingerbread Man sasses back, “Eat me!” Tesori frequently tosses in recognizable phrases from other Broadway standards as humorous comment.

And how can you go wrong when a princess leads a tap-dancing corps of rats? Or three blind mice are the backup group for Donkey doing a Night at the Apollo number? Did I mention the flying dragon? Plus, I dare you not to get caught clapping along in the finale when – and who cares that it makes no sense —  the Slow Burn folks close with, as the film did, the Monkees’ “I’m a Believer.”

The key here is that director-choreographer Patrick Fitzwater with musical director Michael Ursua have a talented cast having one hell of a good time, clearly seen across their faces even when they are covered with wigs and makeup.

Wesley Slade, memorable as the demented teenager in GableStage’s Hand to God, pulls off a minor miracle holding the audience’s loyalty and exuding Shrek’s wounded interior while slathered in pea chartreuse makeup, presumable a latex headpiece and a half-ton of bulging costume over his slender frame.  You have to hope they have cold packs in that outfit. Yet, in row F, it was easy to see his small eyes expressing anger, loneliness and hurt.

Reynel Reynaldo is a delightfully – and somewhat fey – wisecracking Donkey. Without channeling any of the others who done the part, notably Eddie Murphy, Reynaldo becomes a jabbering wacky buddy and revealed to be a deeply loyal friend you’d like to have on your next vacation.

Clay Cartland (if you go to theater locally, you don’t need anyone to list his credits) is hilarious as the self-centered jerk Farquaad. We also hope Slow Burn has a chiropractor on call because Cartland spends most of the show on his knees as the pint-sized narcissist.

A quick shout out to Cindy Pearce, whose clarion pipes blow away the audience as the voice of a dragon. 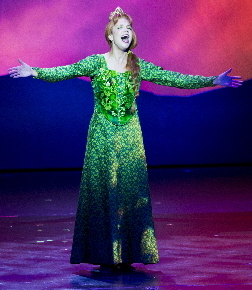 We’ve left the best for last. Kimmi Johnson – who was simply outstanding in Slow Burn’s Freaky Friday – once again triumphs in her role as a lovely Fiona, an opportunity to let loose her gorgeous voice and nimble acting chops. Her Fiona shuttles among all of the classic tropes of a more modern young woman than Snow White: hopeful, dreaming, realistic, petulant, troubled, caring, privileged and a dozen other qualities. If you don’t get a schoolboy crush on her vibrant, funny Fiona, there’s something wrong with you.

Slow Burn productions keep growing in scope, helped in part by its partnership with the Broward Center and now garnering sponsorship from American National Bank and JetBlue. There are 22 in the cast doubling and quadrupling in roles, extensive cartoony depictions of woods and castles by designer Kelly Tighe, and morphing lighting by Jose Santiago. The crucial costumes came from the national tour, and the considerable makeup was designed by Andrew Rodriguez-Triana. Although Slow Burn has always been proud of hiring local musicians, the score this time is digital but it delivers a full orchestration.

Sometimes the word “charming” is meant as a kind of backhanded compliment. But Slow Burn’s Shrek is indeed charming in the most positive sense.

A side observation: Security measures in the three presenting houses in the region have been ramping up for the past few years, recently even in smaller venues like the Kravis’ Rinker Playhouse. But this marks the first time we’ve noticed extra security in the Broward Center’s smaller Amaturo theater including orange clad folks wanding everyone who comes in, goes out and comes in again. And there’s nothing that spells a good time at theater than the sight of two heavily armed uniformed police officers standing watch inside the lobby as if they were patrolling the airport. Welcome to the new world of the arts.

Shrek the Musical presented by Slow Burn Theatre Company through Nov. 10 at the Amaturo Theater, Broward Center For The Performing Arts, 201 SW 5th Ave., Fort Lauderdale. Performances are Thursday through Saturday at 7:30 p.m., Saturday and Sunday at 2 p.m., Wednesday the 6th at 11 a.m.  Tickets are $49-$62 (but prices vary, check website)  Call (954) 462-0222 for tickets, at www.browardcenter.org or #Ticketmaster.com; in person at Ticketmaster outlets or the Broward Center’s Auto Nation Box Office. Info at www.slowburntheatre.org 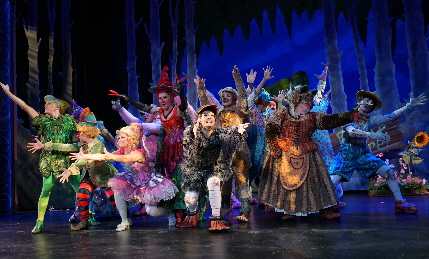