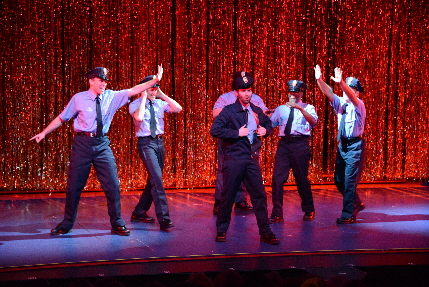 The Full Monty has always been one of those scruffy street mongrels that are undeniably cute and even inexplicably winning for short periods, but not a stray you want to take home. The Wick Theatre’s production of the musical is competent, perhaps one of the better renditions you’ve seen of it, but its uninspiring score and so-so script keep the production from equaling The Wick’s recent triumph with 42nd Street.

Based on the 1997 British film, the 2000 musical (why you’d want to musicalize this is a fair question) follows six laid off steel mill workers in Buffalo trying to raise money and, go figure, their self-respect with a one-night date to strip naked at a local club.

The show is laced with blue collar raunch, locker room language and copious jokes about penis size. But it’s all PG-13 rated and imbued with an almost Disneyfied “aren’t we naughty” elbow in the ribs. Although bare butts are on display intermittently during the evening, even the full-frontal nudity in the show’s final moment is tastefully obscured by blinding lights.

To give the appearance of social significance, the show lightly examines the importance of pride and the equal importance of humility, which sometimes are at odds with each other. For instance, these guys would rather suffer the damage  to their sense of self-worth (not to mention their family’s welfare) by staying unemployed rather than take a job as a security guard at a mall.

That’s one of the few virtues in the book by famed playwright Terrence McNally (Master Class), an acknowledgment (if not outright condemnation) of the sexist, objectifying, misogynistic and misplaced macho hubris of his protagonists. But you can’t help but root for these hapless schmucks whose value system has been pulled out from under them by an economic downturn that is all too familiar to audiences 13 years later. McNally also has a fine ear for quippy witticisms, most of them placed in the mouth of aging seen-it-all rehearsal pianist Jeannette who is a cross between Elaine Stritch and Selma Diamond.

It’s all good, clean off-color fun under the direction of Dom Ruggiero, choreography by Andy Fiacco and musical direction by Michael Ursua. As with its other productions in its maiden season, The Wick hasn’t scrimped much on talent and production values other than the canned music.

The plot centers on Jerry (Preston Ellis), the 32-year-old hero who desperately needs a windfall to pay his back child support to estranged wife Pam (Sabrina Lynn Gore) or lose visitation rights with his son, Nathan (Monti Cerabino). His chubby buddy, Dave (JP Sarro) is similarly depressed, which is affecting his sex life with his wife Georgie (Kara Staiger).

But seeing how a strip club is thriving, Jerry collects a group of former colleagues to his one-night-only strip project, even though all of them are terpsichorean challenged. They include the momma’s boy Malcom who tries to commit suicide (Alex Jorth); the closeted but generously endowed Ethan (Regan McLellan), white collar Harold (Barry Tarallo) who hasn’t told his profligately spending wife (Casey Weems) that he was laid off months ago; and “Horse” (Reggie Whitehead), a retired African-American worker who has the best moves of the group when his back doesn’t go out.  Accompanying their ludicrous auditions and rehearsals is the chain-smoking pianist Jeanette (Leslie Anne Wolfe).

Of course, everyone learns some lesson ranging from the folly of venerating body image to prizing love that transcends materialism.

David Yazbeck’s music is beyond unremarkable. It’s occasionally jazzy like its overture and its big strip “Let it Go” finale that sounds a lot like the big finale in his later Dirty Rotten Scoundrels. But mostly, it is amazingly tuneless and requires superb singers to find a melody to sing. His lyrics are even more varied from the banal to the occasionally witty.

Ruggiero has a decent feel for the material, especially for the risible moments of the steelworkers trying to be suave strippers, notably when Greg Kalafatas, as a union leader, auditions with most inept and unsexy routine ever staged. But generally, it takes the show about a half-hour to get up and running.

The cast does a reasonably decent job with this material. Sarro has the best comic timing; Weems is hilarious in her number anticipating an expensive trip that her husband has promised. Whitehead was the Leading Player in Pippin two weeks ago minus the shoe polish in Horse’s beard; he excels impersonating someone whose aging body is limiting his desire to let himself go with dislocating hip thrusts.

Only Whitehead and Jorth are outstanding dancers in real life, but Fiacco ensures that none of the six ever become some slick synchronized Broadway chorus line, which fits perfectly.

Wolfe’s Jeannette has only one note – that sandpaper-voiced slouching world-weary showbiz warhorse with an endless procession of quips – but she knows how to nail the note.

In her one number, Weems is a standout as she proclaims her love for her husband because of all the things he buys her – a Carol Burnett number sung full out with a trumpet of a voice and limbs flying everywhere with more energy than a lot of the other numbers put together.

Ellis has the roughest assignment: the interminably chipper Jerry whose good-natured Peter Pan charm never deserts him, never, ever, even when he ought to seem emotionally worse for wear. Further, he has to shoulder Yazbeck’s worst songs, the ones with virtually no discernable melody, therefore requiring a stronger voice that he does not seems to have.

While it will never be confused with La Cage aux Folles or Man of La Mancha, this edition of The Full Monty isn’t half bad.