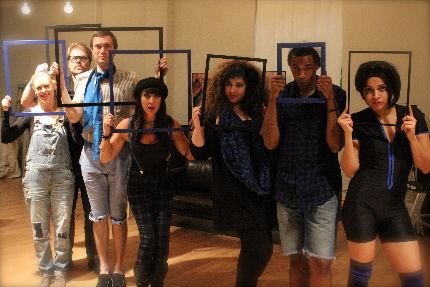 Theater may be the most co-creative, collegial and mutually supportive art form extant, even acknowledging its own vase smashers. Other art disciplines – not so much.

The jealousy, ego and unbridled schadenfreude that exist in any normal human being seem to be intensified among the rarefied spirits we call artists – at least that seems to be thrust of Mark Ravenhill’s droll little satire, Pool (No Water) enjoying a hoot of an outing thanks to Thinking Cap Theatre in Fort Lauderdale.

In this barely one-hour jaunt, members of an artists’ collective are telling us a story of about a former member of their group who achieved wealth and fame, and then left. With gritted teeth and forced smiles, they try to pretend that her success doesn’t matter, all the while sniping that she has lost her integrity and credibility.

Trying not to spoil anything too much (but the title is crucial), suffice it to say that the prodigal daughter is badly injured and her former colleagues gather at her bedside. While keeping vigil, they manage to find a way to make her recovery a subject for a joint and promising artistic project. But her recovery goes so well that she wants to take over the project under her own aegis. And what happens next is a scorched earth spin on schadenfreude.

While hardly a great piece of theater, it’s fun watching these thin-skinned ADD egoists behaving badly, sort of like an artistic edition of The Self-Involved Housewives of Whatever County.

The script is essentially a bare bones monologue and artistic director Nicole Stodard has invented a wry tone and an intriguing vision for the piece.

She has split up the lines among seven people to create a cross between the chorus of a verse play and all those narrators in The Adventures of Nicholas Nickleby. The conceit of a supposedly tight knit “group” works perfectly with members chiming in a smooth narrative that they have told before, a group who know each other well enough to finish each other’s sentences. The cast exudes the sense of a child who has just put a baseball through a window, that slight hangdog grin admitting their human failings with barely the proper amount of chagrin.

It helps that the actors are mostly veterans of Thinking Cap’s pointedly alternative vision of experimental and thought-provoking plays produced on a shoestring budget. Each actor creates an individualized character and each is especially funny as storytellers imitating the voice and attitude of their nemesis, the successful artist. Miles Alexander, Hannah Citrin, Casey Dressler, Desiree Mora and Niki Fridh all work together seamlessly, but the standouts are Scott Douglas Wilson simply because of his larger-than-life brio and Noah Levine as an effeminate drug-addicted aesthete.

Thinking Cap is in the midst expanding its size and scope after three years of producing progressive theatrical stagings of edgy works. This production is being hosted at the MUSE Center for the Arts, a dance studio on a side street near the Restaurant Tap 42. But they hope to hold their next show Hot Dog at their permanent home, a former church being renovated at 1501 S. Andrews Ave., which they have dubbed The Vanguard Sanctuary For The Arts.

Pool (No Water) fits in perfectly with its vision. It really is a trifle, but it’s still an thoroughly entertaining diversion worth seeing that gleefully bulldozes over the boundaries of traditional theater.

Pool (No Water) plays through March 8 from Thinking Cap Theatre performing at MUSE Center for the Arts, 99 SW 14th St., Fort Lauderdale (around the corner from Tap 42 so it may take time to find a parking space). Running time 1 hour. Performances 7  and 9 p.m. Friday and Saturday. Tickets $25. Call (813) 220-1546 or visit http://thinkingcaptheatre.com.