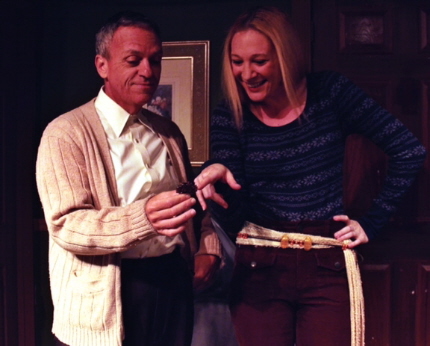 Be careful. Nothing is as it seems as kindly Irish caretaker Bill Battaglia shows some handiwork of the title character to visitor MJ Baum in Andrews Living Arts’ Veronica’s Room

This production is as schizophrenic as any homicidal patient in a psych ward. The first act is unintentionally phlegmatic and unconvincingly executed, while the second act offers a psychological tension and dizzying disorientation that Norman Bates would enjoy.

The evening never quite lands as a whole, but there are undeniably flashes and even long stretches in which director Gary Solomons and his quartet of actors do justice to Levin’s attempt to make the audience wonder what is real, what is not and exactly who is crazy.

Analyzing the plot and production in detail is nearly impossible without spoiling the three or four major surprises upon which everything turns. So these next paragraphs may seem maddeningly oblique,

We come upon Susan, a lovely independent-minded post-hippie co-ed (MJ Baum), and Larry, her doofy companion (John F. Hernandez). On their second date in a Boston suburb, they have by chance met an elderly bog Irish couple (Lory Reyes and Bill Battaglia) in a restaurant. The couple tells Susan that they are servants at a nearby home where Cissie, the surviving sister of three siblings, is dying of cancer and thinks it’s 1935. They ask Susan to briefly impersonate Cissie’s long-dead sister Veronica to give Cissie’s addled mind a little peace. Susan is told she is a doppelganger for Veronica who died of TB in 1935. Susan agrees, donning Veronica’s clothes, boning up on the dead woman’s history and waiting in Veronica’s carefully-preserved bedroom to meet Cissie.

This act is ocean-liner heavy with a tonnage of exposition. Weaving complex who-what-where-when-and-why is difficult for the most skilled actors and these folks are not veteran Broadway thespians. Worse, Solomons mostly has the actors stand around and clue us in.

Only in the last few minutes of this very short first act (less than a half-hour) do we begin to sense something is amiss. Doubtless, we are supposed to have figured that out long before this as in Levin’s other works, but none of the four actors are terribly convincing. (Someone might argue that this falsity is an intentional construct of Levin’s, but that sure didn’t come across as a possibility, except in retrospect).

You go into intermission wondering if you this is ever going to come to life. But have a little faith in the playwright: Levin wrote the novel and/or screenplay for Rosemary’s Baby, The Stepford Wives and The Boys From Brazil, and the playscript and screenplay for Deathtrap (and believe it or not, No Time For Sergeants.) So he has a proven talent for bizarre premises, dark humor, plot twists that turn everything inside out multiple times and psychological suspense.

And indeed, that’s exactly what happens. With some emotional meat to work with, all of the actors except Hernandez suddenly begin earning their car fare. And they succeed in keeping you wondering what’s going on as personas morph and this room seems less of a shrine as a sinister maze. Solomons’ work, too, improves, replacing the static lethargy of the first act with a little action. He and Baum succeed in the toughest challenge late in the second act, when Susan makes a crucial emotional U-turn that surprisingly is quite credible.

The characters’ motivation for the entire evening’s proceedings isn’t clear in this production; you might read Wikipedia after the show to learn it’s even creepier than you might guess. Therefore, the last few twists of the narrative screwdriver are not entirely plausible in this production, although it would take some pretty accomplished actors to make you buy it in the best of productions.

But credit Levin for not leaving any loose ends. There’s a moment in the second act when one character begins to recite names, don’t ask yet why. As it occurs, you begin to wonder if Levin has made a misstep in logic. But then you realize to your horror that Levin has indeed turned everything upside down once again – something that you in the audience realize, but the characters do not. It’s a masterful stroke of audience manipulation.