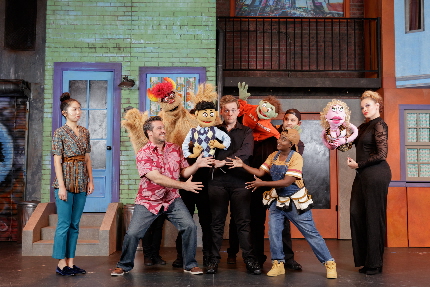 Timely slated between graduations, MNM Theatre Company’s Avenue Q, the musical comedy with foul-mouthed and copulating puppets, has never been as clearly about education as now—not the kind that its hero Princeton has just gotten a degree from or the special school for mini-monsters that Kate wants to start.

It’s the curriculum about coping with disappointment waiting in the real world — the lessons that graduates only learn in the 12 months after the strains of “Pomp and Circumstance” have faded.

The drolly hilarious Avenue Q, being given a “fine, fine” outing by MNM, is also imbued with a quiet sadness and accompanying sympathy for the loss of hopeful naiveté.

It’s success here and in other productions (it may have been more frequently performed in South Florida in recent years than Fiddler in the Roof) is the wry, subversive way that it trumpets truths usually censored by political correctness. The song titles and lyrics give it away: the self-confessional of “Everybody’s A Little Bit Racist,” the celebration of others’ misfortune in “Schadenfreude,” the condescension in “If You Were Gay” and the yin and yang of true love posed as “The more you love someone, the more you want to kill them.” You laugh nervously as each hits a bit too close to home.

For those living in a survivalist compound since this bowed as a surprise hit off- Broadway in 2003, Avenue Q follows recent college grads and their friends living in a fifth-rate urban neighborhood. While they grapple with unemployment, sexual identity and a seemingly vain search for a sense of purpose, the problems facing newly-minted adults are played out on in Sesame Street-like environs complete with peppy musical numbers and animated fables capped by a lesson to teach.

The friends include humans, such as the adult Gary Coleman reduced to being the block’s super (Nayomi Braaf), a failed stand up comic (J.R. Coley), and his vocal partner, the frustratedly underemployed Japanese-American social worker with an intentionally overplayed accent Christmas Eve (Jayne Ng).

During a year on the street, everyone undergoes changes and challenges as sometimes serendipitous, sometimes capricious life moves on with or without them. Results are not always what they expect, not always as satisfying, but pleasant in their own way.

As always, the puppeteers dressed in black are visible operating their charges, and some are often running from role to role to help manipulate a puppet that needs two operators. Poston in a matter of seconds goes from a Bad News Bear to the crotchety old supervisor at Kate’s school to serving as Trekkie’s right arm in a less than a minute.

All these performers deftly manipulate their alter egos with more than the usual skill, especially reacting to someone else’s line, perhaps nothing more than an idiosyncratic cock of the head. The expertise is partly due to the coaching of Louis who has extensive experience including training by some of the original Avenue Q cast. But some of the actors have had cloth creatures on their hands before: Slade won acclaim in 2016 for his teenager being overtaken by a demonic puppet in GableStage’s Hand to God; Piro played Lucy (and Kate simultaneously) for Slow Burn Theatre Company’s production alongside Pena and Poston, and Ryan was in another production.

The entire cast is good at this, but none better than Ross (MNM’s Hair, Spamalot and The World Goes ‘Round) whose lanky elastic body is topped with a mobile face and a commitment to the role so effective that he could easily play the part without the puppet.

The cast’s investment in the reality of their comic roles is due in part to the vision and direction of Bruce Linser who never lets the story flag. Musical director Paul Reekie has gotten precisely the bright cheery Sesame Street sound from both the cast and his band of David Einhorn, Phill Fest, Sandi Hagood, Rick Kissinger and Karen Nagy.

The design elements of the show have become iconic over many viewings, so Daniel Porten’s set and Leslye Menhouse’s costumes add unique touches within the constraints that audiences expect from previous productions, along with solid work from lighting designer Eric M. Winn.

But an inspired touch is how this production uses the big screen over the set. The animated interludes created for the original by Robert Lopez can’t be improved upon and have been rented. But local actor Cliff Burgess has created a procession of faux advertisements and slogans to project during scene changes such as “Fur Lives Matter,” a photo of the “Diff’rent Strokes” cast after we meet Coleman, and one pleading in large letters  “If you see something, say something” with the word in smaller type “Melania. Call 1-800CALLFBI.”

Despite its fare of  bracing reality and daunting disappointments, the book by Jeff Whitty and score by Lopez and Jeff Marx ends with a strangely uplifting (sort of) finale that reaffirms that love and friendship truly are, indeed, the stuff of happiness in a world where nothing good or bad is permanent or dependable. Except, as MNM proves, the show Avenue Q.

Note to parents: For some reason, no matter how adult a show, MNM patrons keep bringing young children to shows that might not be perfectly appropriate. In this case, be warned: Just because this has puppets and the music sounds like Sesame Street, this is not a show for children—not just because of the subject matter will have parents struggling to explain things on the car trip home, but because mostly it will go right over their heads.

Avenue Q plays through June 10 at the Rinker Playhouse at the Kravis Center for the Performing Arts in West Palm Beach. Performances 7:30 p.m. Thursday-Saturday, 1:30 p.m. Saturday and Sunday. Running time 2 hours 10 minutes including one intermission. Tickets $55. Visit www.kravis.org or call (561) 832-7469.