Stars Of David Is Touching, Funny Revue About Identity 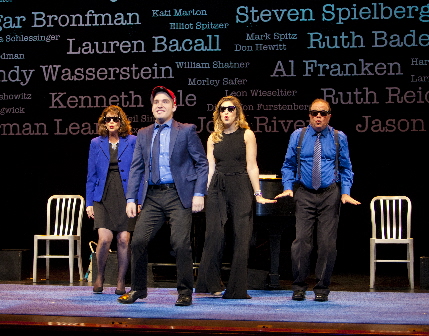 Seeking an answer to “Who am I?” is the defining journey of most lives, and our religious heritage is part of the eternally elusive solution, even if we don’t embrace that religion or its culture.

Such is the soul of Stars of David: Story To Song, a musical revue, which, despite its cripplingly kitschy title, is a surprisingly entertaining, witty and poignant look at how Jewish-Americans struggle on that journey.

Fashion designer Kenneth Cole asks during the evening, “I mean, is who you are the faith you were born into – by no choice of your own?” It is not a rhetorical question.

The show is in a six-city Florida tour opening this weekend at the Kravis Center.

It melds monologues and quips about identity done in interviews with famous contemporary Jews. Interspersed between spoken vignettes are 13 songs keyed to those monologues — music written expressly for this show by a roster of some of the best known composers and lyricists in show business.

Some songs and monologues are just cute diverting throwaways, some are not as well written as others. But several are insightful observations reflecting diverse experiences and devotion ranging from agnosticism to a profound immersion. They often reference rediscovering faith because of inter-marriage or the birth of children.

Underneath is the Jewish touchstone of connection: Jews are taught to feel part of a community that is not just local or international, but which connects back and forward from generation to generation, or as the finale quotes the Hebrew mantra, “L’Dor V’Dor.”

The raw material is drawn from a 2005 book Stars of David: Prominent Jews Talk About Being Jewish in which former 60 Minutes producer Abigail Pogrebin interviewed about 60 notables. She, director Gordon Greenberg and conceiver Aaron Harnick turned it into a play with Charles Busch in 2012 in Philadelphia, later scrapped Busch’s script and created a concert-like show that bowed off- Broadway last year under the aegis of famed producer Daryl Roth.

One of the strongest segments excerpts an interview with Cole who spoke about how he agreed for his children to be raised Catholic in deference to his wife. But with the death of his own father, he felt he had sacrificed something that he needed to relearn before passing it on to his children. Those sentiments are reflected in a song “The Darkening Blue” by Duncan Sheik and Steven Sater (Spring Awakening).

A shattering section depicts Supreme Court Justice Ruth Bader Ginsburg’s memories of being forbidden, ironically by Talmudic law, to be part of the 10-man minyan to say the mourner’s prayer at her beloved mother’s funeral. Those feelings are echoed in the subsequent song, “As If I Weren’t There,” written by Tom Kitt (next to normal) and Pogrebin.

Count me in
The minyan
Yes, I know the law – ten men, ten men.
Please don’t explain that to me again.
She’s been my closest friend
Since I was born
And now daddy, I just need to mourn
Please let me stand next to you
Let me say the prayer
But laws can’t be broken
They prayed without me
As if I weren’t there

Speeches and songs touch on the anti-Semitism that actor Leonard Nimoy experienced as a teenager; Jewish producers rescinding a role for Sarah Jessica Parker because she looked too Jewish; Bravo producer Andy Cohen talking about being forced through Bar Mitzvah preparations, then abandoning his faith until finding a congregation that welcomed gays; Tony Kushner explaining how being raised Jewish prepared him for how society deals with gays; Joan Rivers talking about how High Holy Days provide a respite from her whirlwind life; Lauren Bacall speaking about the double life she led as a goyish movie star and privately as a Jewess.

But there are humorous numbers as well. Jews are forever discovering that some well-known personality is Jewish and proudly proclaiming their kinship. This is underscored as the seemingly ultra-shiksa Gwyneth Paltrow sings about how her looks belie her heritage in “(I’m A) Who Knew Jew.”

The performers embrace the energetic, infectious joy of the piece including Avi Hoffman (who developed the Too Jewish series), local veteran Patti Gardner, the ubiquitous Mike Westrich and out-of-towner Cassie Levine, accompanied on the piano by Caryl Fantel. They have been guided by the show’s original director and writer Gordon Greenberg and musical director Eric Alsford.

The who’s who roster of composer-lyricists include Jeanine Tesori, Richard Maltby and David Shire, Michael Feinstein, Amanda Green and Susan Birkenhead. The reputedly last song written by Marvin Hamlisch with Alan and Marilyn Bergman appears to have been cut from this version but appears on the cast album just released this month on ITunes and Amazon.com.

Among the scores of interviews with Norman Lear, Michael Feinstein, Scarlett Johansson, Steven Spielberg and many others is the distinct sense of pride and confusion and searching, culminating in a reinforcing validation that you’re not searching all alone.

Stars of David: Story To Song playing at the Kravis Center through Feb. 17-March 15. Running time: about 80 minutes.  For tickets visit http://www.kravis.org.

Video of an earlier production and samples of songs can be seen and heard by clicking here.