A Fraying Promise Exposed In GableStage’s The Humans 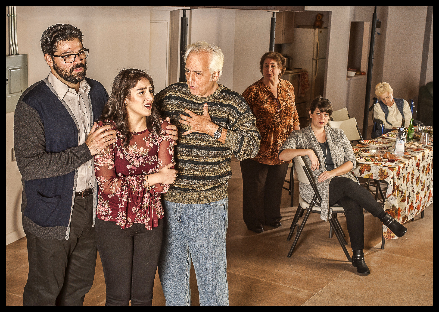 GableStage’s production of The Humans is like watching a Kmart photo department family portrait that has been left too near a wall heater.

Almost imperceptibly, the edges start to brown, the image shudders a bit, then the edges curl ever so slightly. You can’t help notice the matte finish is smoking. And suddenly, the perfect image erupts in flames.

Left behind is the charred image of a less pristine but all-too-recognizable family. It’s still bound by decades of love and shared history, but it’s struggling uncertainly to cope with shortcomings and secrets that challenge their solidarity.

New York had an outstanding cast, but no better than this collection of expert  actors that GableStage has assembled. This version precisely shaped by Producing Artistic Director Joseph Adler is far more engaging right from its opening scenes of the Blake family preparing a Thanksgiving dinner – all overlapping banter, age-old toasts, hoary ballads and other traditions forged over decades of earlier dinners.

But something just out of sensory perception alerts the audience that all is not in balance. As the evening continues, backstories, long-nurtured sore points and a few secrets stoke submerged anxieties until the aforementioned conflagration.

Even in this second viewing, I’m still not sure what the play is “about,” but I know what happens. Eighty percent of the play is an unfolding mystery. The actual content of the solution doesn’t really matter, so much as how it tests the family. A sense of disintegration pervades all night long and you question how much can be salvaged let alone healed.

Like the invading couple in A Delicate Balance, the Blakes are victims of a zeitgeist of frustration, pain and fear as a formless horror escapes their nightmares and invades reality. And, at a minimum, The Humans’ is well worth watching just as a portrait of a 21st Century family struggling with disappointments and discouragements.

Much was made when it first premiered that it reflects a blue collar family struggling with the profound difficulty achieving the American Dream of progressing beyond your forebears  — that which had been promised and was oft achieved a generation earlier.

Patriarch Erik (Michael Gioia) and mother Deirdre (Elizabeth Dimon) have come from Scranton to visit daughter Brigid (Diana Garle) and her significant other Richard (Alex Alvarez) in the Chinatown apartment they are just moving into. In tow are the other daughter, Aimee (Meredith Bartmon) and wheelchair-bound grandmother Momo (Carol Caselle) whose mind is virtually gone.

Erik has worked for years as a custodian at a parochial school with his eye on retiring soon to a lake house; Dierdre is an efficient and underappreciated office manager dealing with a carousel of young soulless yuppie managers. Brigid is an aspiring composer/musician bartending two jobs while trying to get into an advanced education. Aimee is a lawyer and Richard is a trust fund baby closing in on a M.S.W. degree in his late 30s.

But there are ominous omens like clumping in an apartment upstairs and light bulbs that keep blowing out. Each character has turmoil roiling inside. For instance, Aimee is emotionally broken by the recent breakup with her beloved girlfriend and has found out that her debilitating colitis has cost her a partnership. Far worse is in store for all.

The cast – none of whom actually look like they are related to anyone else in the family – is superb. Caselle’s pale zombie grandmother is a frightening reminder of what awaits us all. Garle is engaging as a 20-something finding that life after college is not working out as she hoped. Alvarez inhabits someone who has adopted every trendy affectation and yet is the most stable person in the room. Bartmon is wonderfully vulnerable as the emotionally walking wounded (I don’t know who came up with this, but she picks at her food during dinner as everyone else eats).

But highest honors are due the work of the veterans Dimon and Gioia. They both give a master class in naturalistic acting. They inhabit their characters so completely and with such seeming effortlessness that you believe they are, indeed, an old married couple with decades of shared joys and slights. Their Erik and Dierdre have come to a complete understanding of each other’s strengths and weaknesses. But watch how their deep dark secret slips out by millimeters – unmistakable but still understated. Both actors subtly put across Karam’s underlying concern: the slow sad realization that that their lifelong efforts to achieve economic and emotional security for themselves and their children is seeming less and less likely.

Adler, who also has directed Karam’s Sons of the Prophet and produced Speech & Debate, keeps the evening moving swiftly with verbal jibes and jokes bumping and slamming into and over each other. But his staging is especially notable: more than one duo or trio often have conversations in separate parts of the house at the same time. Further, someone is often listening from a darkened corner of the apartment. Your attention is commandeered as your eyes roam the quirky two-level apartment to ensure you don’t miss anything.

Adler has also bound his cast together so that they believably share a wicked sense of humor, a wry pleasure in knowing just how to ping each other’s egos and rationalizations, and yet savor a true sense of belonging.

Lyle Baskin’s set is a doppelganger of David Zinn’s original Broadway design, but Jeff Quinn once again creates all kinds of off-beat moods with his lighting such as an ultra-brought fluorescents in the kitchen contrasting with the darkened floor above. Matt Corey provides a haunted house-worth of unnerving sounds of a building creaking, groaning and deteriorating.

The Humans is like an anthropologist of the future’s look back at a species’ efforts in the early part of the 21st Century to cope with the fraying of a dream.

The Humans runs through November 5 at GableStage, 1200 Anastasia Ave., Coral Gables, inside the Biltmore Hotel. Performances generally at 8 p.m. Thursday-Saturday, 2 p.m. and 7 p.m. Sunday. Runs 90 minutes with no intermission. Tickets are $42-$60. For tickets and more information, call 305-445-1119 or visit GableStage.org