A Fresh New Argentina, Of Sorts, For Evita At The Arsht 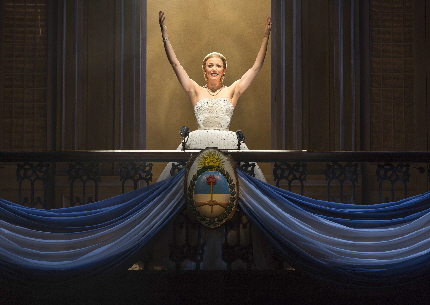 Note: A version of this review appeared a few weeks ago when the same company played at the Kravis Center.

Webber’s score is famously demanding for notes that rudely shove at the upper and lower registers of its singers. Bowman had a little trouble at the deep end of the sadistically difficult range of “Buenos Aires.” But her top notes and her expressive delivery of the ballads were impressive.
Josh Young, who won praise for his Broadway debut as Judas in the recent Superstar revival, delivered a hunky blue collar Che suffused with the anger that comes from disillusionment. Young makes it clear that Che feels betrayed, but deep down he wants to believe in Eva’s promise as the savior of their people. His warm voice nestled somewhere between as tenor and baritone was as clear and strong as anyone in the cast.

Peron himself was essayed by tall and slender Sean MacLaughlin who almost seemed geeky without being able to see his facial features back in Row S. But when he sang, that deep baritone sounds like it was emanating from the depths of someplace where morality is equated with weakness and souls are something to snack on.

Several musical numbers seemed a little muted although they remain effective. The rolling thunder of the Act One closer, “A New Argentina” usually makes an audience want to go out and behead the one-percenters.  This time, it was stirred the blood, but not much more than to want to go to the bar at intermission.

It helps to have read a synopsis ahead of time if you don’t know the show to understand a few plot points that speed by.

This entry was posted in Performances, Reviews and tagged Adrienne Arsht Center, Broadway Across Miami, Evita. Bookmark the permalink.