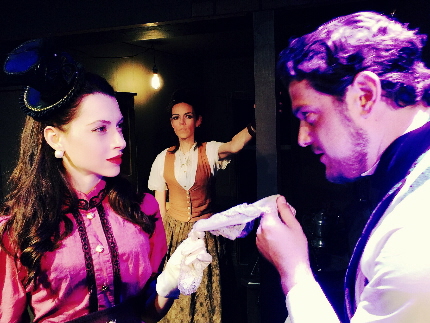 For a century, August Strindberg’s tragedy Miss Julie has been interpreted as a seesaw of power exercised through class and sexual politics. But in Naked Stage’s production, as lives lie in ruins, everyone ultimately is revealed a slave, never a master, when they toy with those three elements. Any impression of dominance is self-delusional.

In 1888, Miss Julie was considered a naturalistic play, but not in the 21st Century. This edition seems an opera in which outsized emotions threaten to swamp a frail craft tossed helplessly on an ocean at the convergence of multiple hurricanes.

But in this case, instead of a fairy tale populated by two-dimensional Egyptian princesses and starving artists, the arias of mercurial moods provide an intimate study of psycho-sexual dynamics that was unusually insightful for its time.

The point is: A modern audience accustomed to genuinely naturalistic dramas will need to recalibrate its mindset to buy into the raging passions that pivot faster than Othello’s faith does to jealousy. It’s also a little extra work for today’s audience to appreciate just how whole-heartedly the class system had been accepted by all castes in 19th Century Sweden.

But once that’s done, Naked Stage’s production is a satisfying, intriguing rendition deftly directed by Margaret M. Ledford and acted at full throttle by Matthew William Chizever, Deborah L. Sherman and Katherine Amadeo, the company’s co-founder who has longed to play the title role for some time.

For those who skipped World Lit 101 class that day, Miss Julie depicts a seriously unbalanced young noblewoman who uses her position and beauty as pressure points in seducing her father’s ambitious manservant Jean who has had a crush on her since childhood. She is a slumming coquette who has no idea what she wants, only that she wants. He is physically larger and smarter, but she is in control. To start. Obviously, this is not going to end well, especially after she succeeds in her transitory quest.

The play really has to be seen — courageously-acted and directed as it is here — to appreciate the complexity of the constantly shifting tools of power that Strindberg weaves through the play such as gender roles, socio-economic status, sexual attraction, guilt, shame and a half-dozen other elements pulled off the wall like medieval armaments in an ornamental display.

Not often mentioned, but clear here, is the push-pull that the characters feel about societal norms. Jean’s fiancée, the cook Christine, says something about the upper crust like, “If they are not better than we are, then what do we have to aspire to?”  Julie and Jean want to throw off the chains and yet they instantly fall back on them; they even need them as a foundation for their world to make any sense. That is what dictates the final scene of the play.

None of this is sexy or sensual even though these performers are certainly attractive. Their characters are in the throes of lust, for sex and power. Their maneuvering doesn’t feel like foreplay and their coupling has zero sense of making love. It’s more like mutual rape.

It’s a testament to the actors and director that no one runs out of emotion or energy in the 90-minute gauntlet.

Amadeo succeeds in the seemingly impossible task of making credible the passive-aggressive Julie whose borderline psychosis and extreme mood swings would challenge any actress. When she is bending Jean to kiss her boot, her face flickers with pleasure, triumph and self-revulsion in the space of two seconds.

Even more difficult – thank you Strindberg — is making plausible how Julie can be imbued with unquestioning knowledge of her superiority as the entitled one percent and then to see her weepily reliant on someone who shines her father’s boots. Somehow Amadeo pulls it off. Hear her say with absolute condescending sincerity, “It must be a terrible misfortune to be poor.”

Chizever, who was so good in GableStage’s Venus In Fur, conquers his similar challenge. Jean has ambitions of reinventing himself as the owner/operator of a hotel in Italy. He is both proud of what he has amassed in worldly knowledge through travel and an almost cold pragmatism about life and love.  And yet, Chizever makes completely believable that Jean is in thrall to the class system: genuinely admiring his master, well-versed in the protocols and pitfalls, and perfectly aware how disastrous a liaison with Julie could be.

Sherman has the challenge of Strindberg’s least defined role – the almost comically stern cook who so completely rejects the social heresy of Jean’s tryst that she says that she can more easily forgive that infidelity than if he had bedded another servant. But Sherman makes Christine’s single-minded devotion to the order of things the only fully admirable person in the play.

Ledford is one of the region’s best directors – we’ve used that phrase several times before. This show seems a little out of her wheelhouse, but she is more than capable of leading us through the intimate eavesdropping and the serpentine changes.

Amadeo, Chizever, Ledford and set designer Antonio Amadeo (who creates a claustrophobic cockpit of a utilitarian kitchen) all worked together on Naked Stage’s triumph in 2012, another psychological  period piece The Turn of The Screw.

Naked Stage has to raise the money between shows, so its production schedule is intermittent. But as Miss Julie shows, it doesn’t disappoint whenever it resurfaces.

Miss Julie runs through June 8 at the Pelican Theatre on the campus of Barry University, enter parking lot off NE 115 Street just east of Miami Avenue in Miami Shores. Performances 8 p.m. Thursday-Saturday, 2 p.m. Sunday. Running time 95 minutes with no intermission. Tickets general admission $30, seniors $18, students $12. Seats are general admission and there are only 43 seats, so get there early. Call (866) 811-4111 or visit www.NakedStage.org