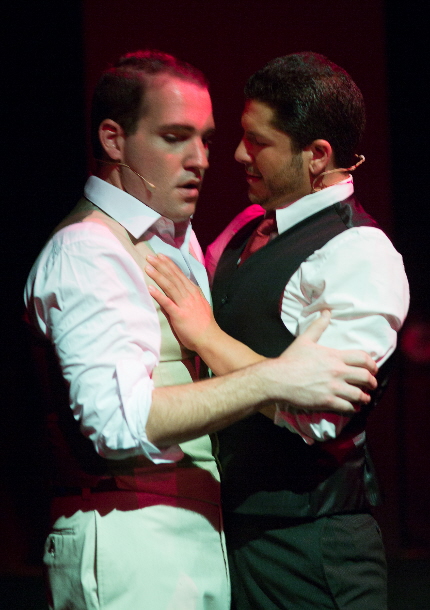 Mike Westrich and Conor Walton as sociopathic killers in Thrill Me, a chamber musical from Outre Theatre Company

Back in 1948, Alfred Hitchcock directed Rope, his most play-like of movies. Set in a single interior location and told in just 10 continuous shots, it was a sustained exercise in audience concentration. Not surprisingly, it was based on a 1929 play by Patrick Hamilton that took its inspiration from the real-life Leopold and Loeb murder case, in which two young men from Chicago slaughtered a 14-year-old boy in 1924, simply for the perverse thrill of doing it.

The heart of Hitchcock’s movie are the exchanges between its thrill-killers/lovers, Leopold and Loeb by any other names, played by John Dall and Farley Granger—both closeted Hollywood homosexuals whose characters’ smoldering onscreen relationship could only be implied, lest the censors have a conniption. By the time James Stewart shows up playing James Stewart, he sucks the oxygen out of the room, and Rope becomes less about unspoken desires and power dynamics of its intellectual murderers, and more about the movie star solving the mystery so we can go home feeling a little less uncomfortable.

For a Leopold and Loeb dramatization whose focus never wavers from exactly where it should be, look no further than Thrill Me, a musical-theater labor of love from triple-threat composer/lyricist/book writer Stephen Dolginoff. Closing out Outre Theatre Company’s 2013-2014 season nine years after its off-Broadway debut, this two-man, one-act musical still has the offbeat immediacy and barebones potency of a feverish fringe festival favorite, and it offers further proof that in Outre’s finest productions, less is more. Fearless direction from Skye Whitcomb and a pair of wildly contrasting but deeply engaged performances from Mike Westrich and Conor Walton translate Dolginoff’s coffin-black vision with demented urgency.

The only flaw in Thrill Me is its unnecessary framing device, which finds Nathan Leopold (Westrich) appealing to the parole board at an Illinois prison for the fifth time. It’s 1958, and we’re about to hear his tale of love and murder and woe and one-upsmanship reiterated in the style of a lazy cinematic flashback. Once you get past this minor dramaturgical hurdle, you’ll largely forget about it and find yourself enthralled by the music and acting.

The plot is as simple as the (uncredited) scenic design, which consists of four movable cubes, a metal folding chair, and a few black panels. Affluent law student Nathan meets homicidal classmate Richard Loeb (Walton) at the University of Chicago and becomes hopelessly smitten. Falling under Richard’s dominant spell, Nathan assists him in a series of increasingly dangerous crimes—committed, per Richard, to prove their “superiority” over the mass of mortals—with Nathan accepting sexual favors and intimations of love in return. Their extralegal adventures culminate in the murder of a teenage boy and the subsequent police investigation that sends them to prison and straight into the annals of pop psychology and morbid public fascination.

The 16 solo piano songs, performed beautifully and funereally onstage by music director Kristen Long, resemble Sondheim both in their clever blackness and difficult fluidity, with the actors required to drift in and out of song. Both achieve this without missing a beat.

Dolginoff’s sympathies clearly lie with Nathan Leopold, whom Westrich imbues with the tragic pathos of a wronged man—a victimizer who never stopped being a victim himself, save perhaps for a twist late in the show. The actor’s inherent likeability, which this year has brought out the best in shows ranging from The Plaza Theatre’s Rags to Island City Stage’s Have I Got a Girl For You, goes a long way at providing the emotional, relatable core of this sordid true-crime nightmare.

Walton’s Loeb, meanwhile, is a sheer terror, the show’s unfettered id. Introduced in a rakish black suit to Westrich’s virginal white attire (Sabrina Gore handled the evocative suits, fedoras and prison garb), he first appears as a haunting, low-lit specter. Not until the end of the musical does he express humanlike vulnerability; for the rest of it, Walton is a larger-than-life demon, possessing the hypnotic air of a Machiavellian arch-villain and the vacant eyes of a psychopath, his chest puffed up and his carriage always erect. His performances of “The Plan” (in which he proposes murdering his own brother) and “Roadster” (in which he lures the 14-year-old victim into his car) are as chilling as live theater can be.

The production’s minimalist staging receives a flawless assist from Stefanie Howard’s exceptional lighting scheme. Her work is full of subtle gradations, dangerous beauty (she effectively evokes a flickering fire during an arson scene, illuminating the actors’ faces in varying shades of red and orange) and dramatic punctuation, from the suggestion of a car’s headlights to flashes of bright light for each of the killers’ murderous blows.

Part of the reason the lighting is so noticeable is because the rest of the show is so unceasingly black. Whitcomb deserves ultimate credit for respecting the darkness of this material, and for pushing Walton’s performance to truly frightening extremes. With any luck, this is the sort of show that will haunt your dreams.