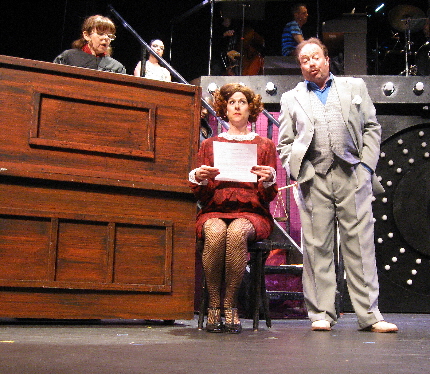 A muted clarinet makes beautiful music, but sometimes what’s called for is the blare of a clarion trumpet and the insolent snap of a snare drum. That’s the problem facing the almost but never quite satisfying Boca Raton Theatre Guild production of the Kander & Ebb musical Chicago.

Now operating as a professional troupe, the Guild has brought together some of the best talent in the region, cast in roles they were born to play: Patti Gardner as the not so innocent murderess with a kewpie doll voice Roxie Hart, Avi Hoffman as the archetype of an amoral lawyer Billy Flynn, New Yorker Krisha Marcano as the hard-bitten Velma Kelly, Ken Clement as hapless nebbish Amos Hart, Sally Bondi as the butch pragmatist Mama Morton, Ron Hutchins for inventive choreography and Eric Alsford for skilled music direction. You can’t ask for better. Under Keith Garsson’s direction, these folks are incapable of a bad performance, so a lot of audience members left opening night feeling entertained.

But the cold truth is there is a much better show possible. So much is missing, starting with the razor sharp tang of cynicism, the jangling frisson of razzamatazz and the anarchic thumb-nosing of unbridled sex. Instead, we get a competently executed edition of low-key musical theater. These people are working hard, but there’s a scene in which Bondi tries twice – and fails – to crack a bullwhip. That’s an apt metaphor for the whole show.

Chicago is the amazingly prescient musical from 1975, based on an even more prescient black comedy from 1926 – two years after the real murder that inspired it. When done right, Chicago is a jet black satire that viciously lampoons the public appetite for scandal even at the cost of glorifying the erosion of human decency. Set as a series of vaudeville acts, it gleefully skewers the venal, the corrupt and the manipulative by showing how the mass media – pandering to craven public cravings – are enablers of heinous behavior in a synergistic dance. The whole thing is what screenwriters Ernest Lehman and Clifford Odets once wrote in Sweet Smell of Success as “a cookie full of arsenic.”

It was a mild success in 1975, the year of A Chorus Line, with Gwen Verdon, Chita Rivera and Jerry Orbach. But the real star was the now iconic choreography by Bob Fosse. It was revived in 1996 in a concert staging with former Fosse girlfriend Ann Reinking choreographing “in the style of” the master. It then went on to a Broadway run that is still playing today thanks to a succession of the unintentionally ironic stunt casting of celebrities.

The Guild production has several virtues, especially Hutchins’ choreography,  which melds his own vision and steps with Fosse’s carnally-drenched hip-popping finger-snapping style. To scrap Fosse would disappoint any audience.  This is best seen in the delightfully morbid Cellblock Tango featuring accused murderesses explaining why they killed a spouse or lover. Hutchins’ moves provide a physical analog for the song’s theme “Yeah, I shot the bastard. So what?”

Gardner has proven repeatedly that she has terrific musical theater chops in every department and Roxie has been a role on her bucket list. But she has been fighting off a cold this week and while she is giving this everything she has, the cold is clearly curtailing what we’ve seen her do before. Still, she’s scores with her numbers “Roxie” and “Me And My Baby.”

Marcano is just as talented as a vocalist with a lovely cool sound, but she too seems to take several scenes to get into the role. Her opening number “All That Jazz” is supposed to be a crisp cattle prod jolt of electricity; here it’s so languorous and hard to hear that the show’s engine idles for another few scenes.

Hoffman bravely dons the raiment of the unequivocally unredeemably corrupt attorney, but even he seems to be stuck somewhere between second and third gear.

Bondi devours the role as the opportunistic prison matron and starts off her big number “When You’re Good To Mama” with the zest and belt that most of the show lacks. But she loses steam about two-thirds of the way through. She’s much better in her duet with Marcano, “Class,” in which these two moral monsters bemoan the fading of values.

The only person who nails his role is Clement as the cuckolded sap who we’d feel sorry for in the ultimate sad sack softshoe “Mr.  Cellophane” if it wasn’t that the authors don’t want us to feel sorry for anyone.

A shout out is due to Matthew Korinko as the smarmy announcer/emcee and Sharyn Peoples as the gossip mongering sob sister reporter. Also kudos to the ensemble of dancer/singers: Mike Westrich, Del Marrero, Francisca Munoz, Ann Marie Olson, Marcela Corbellini Duarte, Jerel T. Brown, George Macia and Conor Walton, several of whom are part of Slow Burn Theater Company’s troupe.

Also credit Alsford for leading a five-piece band (and the Guild for paying for one).

There were various technical glitches– such as missed light cues and the band overpowering the singers — but the production only gets time on stage two days before opening night, so those problems will likely work themselves out.

There’s little actually wrong with this production. Everyone from Gardner to Hoffman to Hutchins are too good to let that happen. But when the cast sings, “give ‘em the ol’ razzle-dazzle,” you may be wishing they would.