Can You Spell Hilarious Or Poignant? Slow Burn’s Bee Can 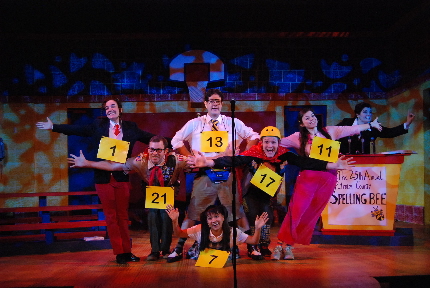 William Goldman wryly, but seriously stated as the theme of his brilliant comic novel The Princess Bride (not his weaker movie) that “life isn’t fair; it’s just fairer than death.”

The 25th Annual Putnam County Spelling Bee musical explores in its charming, comical and stealthily touching way how we learn to cope with that truism when much of life seems a winner-take-all competition that most people are certain to “lose” — depending on your definition of that term.

Slow Burn Theatre Company gives this perennial favorite as excellent a production as we’ve seen of it, hitting the perfect balance between the hilarious and poignant, marked with a child’s exuberance for living and an adult’s compassion for the angst over the process of losing innocence.

For those who have never seen William Finn, Rachel Sheinkin and Rebecca Feldman’s popular 2005 musical, this description may seem a little overblown when you hear the premise: It is, indeed, the finals of a county-wide spelling bee in which a half-dozen quirky but lovable pre-adolescents run a gauntlet of ever more impossible words like “weltanschauung.”

But each child – all played by young adults – is desperately seeking validation of their self-worth, as everyone in the audience once was or are still struggling with.

Each reveals their backstory in a song or scene. Leaf Coneybear (Christian Vandepas) is the immature kid whose unfettered ebullience is infectious but whose family has told him that he’s dumb. Marcy Park (Jen Chia) is somewhat dour but a preternaturally overachiever tired of unrealistic expectations based on her being Asian. Chip (Rick Peña) is dealing with the pressure of being last year’s winner but is distracted by the first stirrings of puberty. Logainne Schwartzandgrubenierre (Jessica Brooke Sanford) is under intense pressure to excel from her two gay fathers. Olive Ostrovosky (Anne Chamberlain) is the sweet shy but bright girl with a vivid fantasy life whose estranged parents have emotionally abandoned her. And finally, there’s William Barfee — pronounced Bar-fay not Barf-ee (Mark Della Ventura) the socially-inept off-putting savant who spells out words with his foot before saying it aloud.

Even the adults in the show are struggling with the past: Kaitlyn O’Neill is Miss Peretti, the bee’s organizer whose primary source of pride is having won the trophy herself 22 years ago; Matthew Korinko is Mr. Panch, the deadpan assistant principal/word caller who has just returned to the bee after an undisclosed “incident” five years earlier but who is “in a better place now,” and Kunya Rowley is Mitch, an intimidating ex-con assigned by a judge to community service at the bee as its “comfort counselor” (read: bouncer) to console the losers with a hug and a juice box..

If they all sound like archetypes — and they are meant to – this fine, fine cast, the show’s writers and director Patrick Fitzwater invest each with a vibrant individuality that prevents them from becoming two-dimensional.

Putnam’s underlying genius lies in that everyone on the planet secretly feels or has felt like an outsider or a misfit, and everyone can identify with the angst these outsized nerds are wrestling with. As one lyric underscores, “Life is pandemonium.”

One by one, they are eliminated, and each learns their own specific way of dealing with disappointment and finding a way to go on with their lives. One of the joys of the show is that, in fact, each of them do.

Another facet ratcheting up the merriment is that four audience members are chosen before the show to participate in the bee. While each does their best to the delight of their fellow patrons – some are embarrassed, most get into the spirit of it — it’s clear that each is doomed to be eliminated.

A wry tongue-in-cheek humor pervades the script and score that are more ingeniously crafted than the casual observer might realize.

While this sounds like a family show – and it can be, I guess – this is not a children’s musical. There’s some mild profanity and sexual overtones such as Chip succumbing to the first stirrings of adolescence in a song called “Erection.” Some of the humor might be accessible to all ages, but appreciating the drama requires a little more life experience than a pre-teen would have.

Slow Burn’s production is so light-hearted and entertaining that few people other than theater professionals will appreciate just how smoothly and skillfully this has been put together and executed. But Fitzwater and friends have invested a lot of seamless and invisible craft in every aspect, down to Sean McClelland’s gymnasium in primary colors, to Lance Blank’s ever-morphing lighting, to Danny Butler’s crystalline sound (now that he has a good system to work with), to Rick Peña’s costumes that copy the originals, but are dead perfect. Musical director Manny Schvartzman didn’t have a live orchestra for a change, but his tracks were flawless.

One of the great pleasures having watched Slow Burn productions since the company bowed in 2010 is seeing its slow, sure growth. This is especially true of the cast, most of whom are members of Slow Burn’s unofficial repertory company of non-Equity actors. For instace, Chamberlain is nominated for a Carbonell Award this year for the title role in Slow Burn’s Carrie. Sanford and Vandepas were acclaimed just a few weeks ago for their work in Bonnie and Clyde. Slow Burn co-founder Korinko and Peña have been in almost every production. All of their gifts seem to expand and their skills deepen with each production.

Every single actor displayed strong, expressive voices and invested their being into making these cartoonish characters as endearing and plausible as possible.

To unfairly single out a few: O’Neill’s gorgeous soprano, which seems to soar ever higher and clearer each year, is infused with the emotion of a character living on her single past glory. Slow Burn newbie but regional veteran Della Ventura was a perfect blend of insecurity masked by obnoxious confidence. And once again, the winsome Chamberlain is outstanding as the gentle Olive, especially in a heart-rending lovely trio with O’Neill and Rowley reimagined by Olive in a fantasy as the parents she wished she had

This is Slow Burn’s second production in its new partnership with the Broward Center for the Performing Arts. Slow Burn plans to mount two modest-in-scope shows in the Abdo New River Room, and next season will move its four mainstream productions from West Boca Community High School to the Broward Center’s Amaturo auditorium.

The Abdo space with its cabaret style seating and table service has proved a problematic space for some companies – especially with a stage that seems broad and yet shallow. But Slow Burn appears to have conquered whatever the challenges are.

Slow Burn’s Putnam may not be Hamlet, but it’s almost guaranteed to enchant. By the finale, you wanted to take each of the contestants home, or at least give them a hug and a juice box.

The 25th Annual Putnam County Spelling Bee presented by Slow Burn Theatre Company runs through April 19 in the Abdo New River Room at The Broward Center for the Performing Arts, 201 SW Fifth Ave., Fort Lauderdale. 7:30 p.m. Thursday-Saturday, 3 p.m. Sunday. Tickets (954) 462-0222 or www.browardcenter.org. Runs 2 hours 5 minutes with one intermission. Table service for small plates and drinks begins 90 minutes prior to the performance. Tickets are $45 which does not include food, beverage or gratuity. 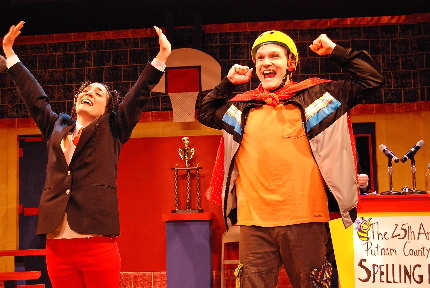