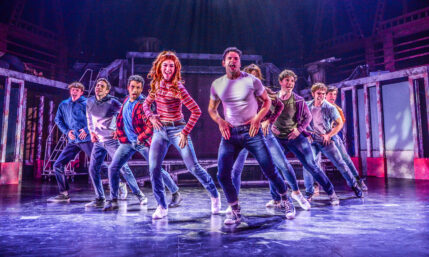 A hallmark of Slow Burn Theatre Company is its knack in finding new, mostly young talent and shaping those performers’ creativity. That approach—and this current round of talent—are on full display in Slow Burn’s high energy, highly entertaining production of Footloose, now at the Broward Center’s Amaturo Theatre through Jan. 1, 2023.

From the intro to the finale, Slow Burn’s Footloose never loses its momentum as the production briskly moves through its some 20 song numbers, assisted by solid direction from Patrick Fitzwater, fluid choreography from Shannon Mullen and a tight band courtesy of music director and conductor Michael Ursua.

They’ve assembled an appealing cast that nails the musical numbers and delves a bit deeper into the underlying themes of Footloose such as teen angst, grief, parent-child relations and feeling like an outsider.

The 1998 musical — based on the 1984 film of the same name that starred Kevin Bacon — revolves around teenager Ren McCormack, who, with his mother, Ethel, move from Chicago to the small town of Bomont after his father abandons them.

Bomont is so small Ren and his Windy City friends wonder where the town is located. It’s so small no state is ever mentioned.

The move isn’t easy on either Ren nor Ethel. At least Ethel has her sister and brother-in-law with whom mother and son will live while Ren, missing his friends and his nights dancing at Chicago clubs, has no one. He can’t even dance as the town outlawed dancing more than five years ago after four teenagers were killed in an accident driving back from a dance in a nearby town.

Ren quickly becomes an outsider and labeled a trouble maker soon after he arrives in town. His behavior is scrutinized and assumed to be bad. All he really wants to do is dance.

The dancing ban hasn’t just put a crimp in Ren’s style, it’s made every teenager yearning to leave Bomont, wherever it is. It’s made gossip even more vicious than it normally is in small town. The ban also has pitted the Rev. Shaw Moore, who came up with the dance law, against his daughter Ariel. She is rebelling with provocative dress, sneaking out of the house during the night and dating violent, high school dropout Chuck Cranston.

The city council reasoned that banning dancing would stop other teenagers from drinking, doing drugs and preventing another fatal accident. Obviously, none of the council knows teenagers.

Ren becomes determined to get the law repealed so dancing can resume. If a ban on dancing seems like a shallow right to fight for, think of it as a metaphor for being denied that which gives us pleasure. It also illustrates that it’s possible to work to get a ridiculous law changed.

Kyle Southern is a stand out as Ren—charismatic while hiding a deep hurt about being abandoned by his father. Caiti Marlowe, who made a terrific ditz in Slow Burn’s recent Little Shop of Horrors, makes a formidable Ariel—rebellious but also yearning to reconnect with her father, the rigid, grief-consumed Rev. Shaw (Michael Dean Morgan). Jeffrey Keller, last seen as the terrifying dentist in Slow Burn’s Little Shop of Horrors, finds the humor as the lanky Willard Hewitt who becomes Ren’s best friend. Dorian Quinn as Chuck is the kind of bad boy who would drive every father crazy but has a certain appeal to a teenage girl.

Other standouts include Heather Jane Rolff as Ren’s mother, Ethel; the always reliable Irene Adjan as Vi, Ariel’s mother and the often ignored pastor’s wife; Chris Alvarez as Cowboy Bob; Jerel Brown as Principal Clark; Dan Carter as Wes Warnicker and Dalia Aleman as Lulu Warnicker. Kristi Rose Mills, Camryn Handler and Nikki Dikun are the kind of best friends each teen girl needs. The young men and young women who comprise the ensemble are pure entertainment with their precise dancing (it’s legal on stage which must be outside the limits of Bomont!) and acrobatics. Don’t be surprised if you see many of these young men in Slow Burn’s production of Newsies next June.

Special note to the effective scenic design by Sean McClelland (and swift scene changes by the able crew), lighting design by Clifford Spulock and costumes by the ever-talented Rick Pena.

Footloose opened on Broadway in the Richard Rodgers Theatre on October 22, 1998, and ran for 709 performances until July 2, 2000. Slow Burn’s version is only here for three weeks.

Footloose presented by Slow Burn Theatre Company through Jan. 1, 2023, at the Amaturo Theater, Broward Center For The Performing Arts, 201 SW 5th Ave., Fort Lauderdale. Performances are Tuesday through Saturday at 7:30 p.m., Saturday and Sunday at 1 p.m., Sunday at 6:30 p.m. Running time two hours, 20 minutes with one 20-minute intermission.  Tickets are $49.00 – $65.00. Call (954) 462-0222 for tickets, at www.browardcenter.org or #Ticketmaster.com; in person at Ticketmaster outlets or the Broward Center’s Auto Nation Box Office. Info at www.slowburntheatre.org.