Posted on September 5, 2021 by Bill Hirschman 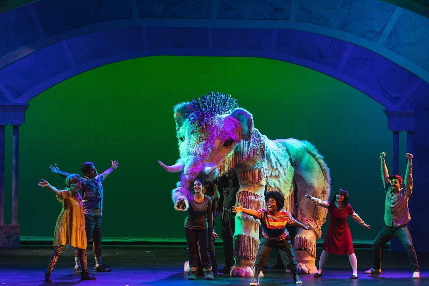 The cast celebrates the titular star of The Impracticality of Modern-Day Mastodons / Photos by Morgan Sophia Photography.

ALICE: One can’t believe impossible things.
QUEEN: I daresay you haven’t had much practice…..When I was your age, I always did it for half-an-hour a day. Why, sometimes I’ve believed as many as six impossible things before breakfast.

Yes, there is broad humor, over-the-top characters, cartoonish sets and a fairy tale vibe throughout The Impracticality of Modern-Day Mastodons. And, yes, there is a 10-foot tall flamingo-pink and powder blue puppet of the titular creature stomping around the stage.

But while this self-styled “family play” has plenty to make children giggle and a child-telling-a-story aura suffuses the entire evening, Theatre Lab makes it clear that Rachel Teagle’s world premiere script is not children’s theater.

Under its considerable charm and playfulness, Mastodon investigates the complex yin-and-yang of aspirations and dreams.

The premise is that every adult in the world wakes up one morning to find they have become whatever they dreamed of being as a child: a TV anchorwoman, a princess, an astronaut. There are 80 million newly-minted ballerinas. Our heroine Jess, who labors in an insurance adjuster office, has become the mastodon she glowingly described in a school essay.

We follow Jess like a modern-day Alice through this transformed Looking Glass world as she tries to make sense of the changes surrounding her and how she can go forward.

While the play savors the initial ecstasy of those choices made by innocent minds, it also underscores the old saw “Be careful what you wish for.” Indeed, the reality of living out an impractical dream is exposed as sometimes harboring hidden disappointments. But by play’s end, not really a spoiler alert here, the freedom and joy of some “impractical” choices are celebrated, even as Jess heads into an uncertain future.

This may sound like a litany of obvious truisms, but Teagle and Theatre Lab’s skilled company – from actors to designers – are offering relevant advice to adults trying to decide what to do with their lives today or what they already have chosen to do with them.

This becomes clear when the whimsy and humor infused in Jess’ journey takes a dark turn as she finds out exactly how and why this transformation occurred. No, you’ll get no spoiler here.

A word about the larger Jess who has as much stage time as anyone in the cast. She’s 10 feet tall, 12 feet front to back, and while her hips are only 6 feet wide, she needs another two feet to accommodate her undulating body when she swaggers across the stage. She was created by puppetmaster Jim Hammond and a large collection of fabricators and craftspeople. Three puppeteers hide under her pastel fabric carcass, with fringes around her joints and strange fibers sticking off the top of her head. Additionally, the actress playing the human Jess operates the supple trunk as it emphasizes points and feeds itself mints.

Like many world premieres in regional theater, the script needs a little more work. It drags in places through no fault of the committed cast and director. A good dramaturg could suggest some helpful cuts in its 1 hour 40 minute intermissionless running time. Further, the final scenes are a bit confusing, including a flashback you don’t realize is a flashback, although they make more sense as you drive home in your car.

But Teagle is blessed by having the play developed by Theatre Lab, which has a solid track record producing adult fairy tales such as The Glass Piano under the inventive direction of Matt Stabile. His energetic cast expertly inhabits comical cartoon-like characters with the absolute truthfulness of denizens of a Shakespearean classic. No one is winking at the audience.

Gaby Tortoledo is a winning Jess, the human who stands at the front of the creature throughout, operating the trunk and giving a perfectly credible performance of the wonder and confusion of the personality encased in the unnatural shell.

The rest of the ensemble becomes a parade of multiple characters with distinctly different voices and miens, each funnier than the last. Irene Adjan, who gave one of 2019’s best performances in The Cake, is an old Summer Shorts hand at creating vibrant comic characters. Her ultra-efficient bureaucratic “vocational advisor” Delores trying to help Jess find a placement is a hoot.

Daniel Llaca transforms from Jess’ boyfriend, frustrated in his career as a journalist, into a hyper-suave tuxedoed super-spy as a pre-teen might imagine after watching too many James Bond movies. His hilarious posturing and posing belie an actors’ skill at physicality. Niki Fridh, another Theatre Lab veteran, is perpetually mirthful as Tracy, a woman overjoyed at becoming a TV news co-anchor. Carlos Alayeto plays Pat, her sophisticated partner on the news desk, frustrated at the lack of experience of his new partner and the loss of his solo spotlight. Rachel Michelle Bryant plays the primary narrator, a fledgling astronaut and a linchpin child with enough infectious energy to light up a circus tent.

Jess the mastodon is brought to life—her mid-section heaving for breath, her rump swaying—by a cadre of puppeteers switching off among performances: Djimon Armani, Eric Fredrickson, Alyssa Frewen, Michael Focas, Steve Harding, John Dalton Logan, Rebecca Lucatero, Ashley Miller, Caleb Williams and Rachel Dawson.  At Saturday night’s performance, Dawson held up Jess’ head, standing right behind Tortoledo. Throughout in the shadows, she delivered facial expressions to react accurately to whatever was happening around her or whatever Tortoledo was saying.

Under Stabile and assistant director Joanna Orrego, every facet is molded into a smooth solid whole, from Michael McClain’s comic book sets to Thomas Shorrock’s lighting to Dawn C. Shamburger’s costumes. As the company did with earlier shows like Everything Is Super Great, it smoothly inserted pre-recorded videoed scenes, this time of the news programs with Pat and Tracy, projected on screens on either side of the stage.

Teagle’s script slides neatly into a groove that Theatre Lab excels at—a highly theatrical style that quietly teaches a lesson while entertaining you with a presentation reminiscent of your parents reading you Alice In Wonderland at bedtime.

The Impracticality of Modern-Day Mastodons, runs through Sept. 19 at Theatre Lab at the Florida Atlantic University’s University Theatre, the building up the hill from the parking garage, not Theatre Lab’s usual space.  Tickets $25 plus processing fee.  Up to 4 children (under 18) for free with each paid adult admission. Performances will be Saturdays at 2 p.m. and 7 p.m., Sundays at 3 p.m. Running time 1 hour 40 minutes, no intermission. For more information, go to https://fauevents.universitytickets.com or call 561-297-6124.

To read a feature on the construction of Jess the mastodon, click here. 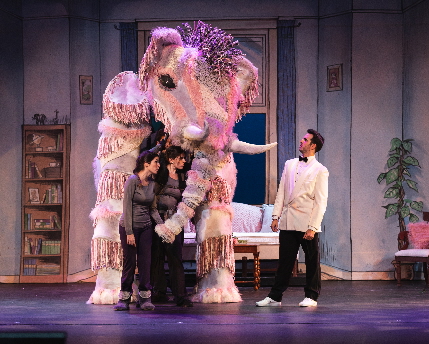