Dramaworks’ History Boys Celebrates Intelligence And Education For Its Own Sake

Posted on December 5, 2015 by Bill Hirschman 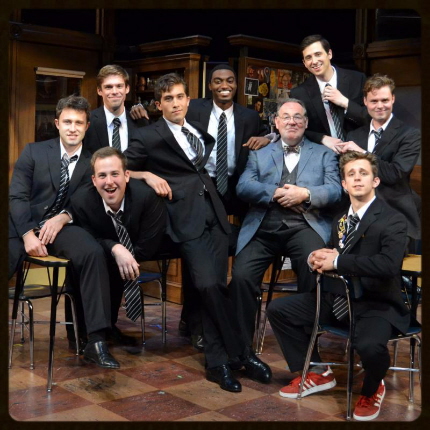 Playwright Alan Bennett has his protagonist educator Hector in The History Boys decry wallowing in the pure glory of words issued profligately by poets and philosophers.

Bennett’s award-winning drama, suffused with humor, prizes the intellectual pyrotechnics engendered by a classical education. But he laments the ascendancy of people who see little priority in the pragmatic world for the acquisition of knowledge for its own sake with no direct “usefulness.”

Specifically, the aging British prep school don Hector is diametrically opposed to the teach-to-the-test ethos of Irwin, a young teacher hired to juice up students’ skills in finessing college entrance exams in the mid-1980s.

Those skills are far less concerned with factual arguments so much as splashily assuming provocative positions that turn conventional expectations on their heads regardless of the actual truth or even what the boys believe. As one student says, “Truth has become so relative as to become meaningless.” Sound like the current political debates?

Not that Hector scorns pop culture; he relishes his charges incorporating music hall entertainers and classic film references into their erudite classrooms debates. But it’s just another facet of the world that should be part of their cogitations.

Bennett, writing in 2004 about then 20 years past, knows that Hector and even his accomplished pupils are doomed dinosaurs in a Kardashian-Rubio world. But while he writes clear-eyed of the flawed nature of such an education aesthetic, The History Boys also serves as a sad elegy for the loss. The play asks what exactly is the point of education and how does that definition define who we are and what we value. As one character asks: Do we want them “to be thoughtful or ‘smart’?”

All of this and much, much more than anyone can process in one viewing is exemplified in director J. Barry Lewis’ fine-grained leadership of an entire cast absolutely equal to the challenge, starting with the inimitable Colin McPhillamy as Hector and the eight young men portraying his pupils.

The play is set in one of those oak-paneled institutions housing a remarkably elite class of students on the cusp of leaving adolescence for adulthood. They are spending their last months prepping for university entrance exams. Until now, their beloved mentors have been the non-nonsense but guardedly maternal history teacher Ms. Lintott (Angie Radosh) and Hector, a portly boffin with a stunning facility for intellectual thought, for engendering his boys’ loyalty and for discreetly fondling their genitals when they hitch a ride daily on his motorcycle.

Hector’s unfocused educational free-for-alls are less about dates and places – these boys long ago built up that storehouse of factoids – and more about using them as ammunition in cerebral sparring which gives points for the ability to cite Siegfried Sassoon and Wilfred Owen.

The headmaster of the second-tier school (Rob Donohoe), more administrator than educator, wants to impress his board of directors by getting all eight boys into prestigious Oxford and Cambridge. He hires the young ambitious Irwin (Cliff Burgess) to shake the boys out of their inspired but traditional approach, and thereby butting heads in educational philosophy with Hector.

The trophies are the boys’ hearts and minds as they prepare for the future. But the bulk of the play is told as a present-day bittersweet reminiscence by one of the boys, so we have immediate intimations of how this will turn out.

To be fair, it’s a play that absolutely requires close attention from the audience. Even then, the dense torrent of thoughts will be impossible for virtually anyone to grasp in one sitting (but the same can be said for Hamlet). An extended scene depicts the class using a bawdy improvisation to further their facility with French in, as one observer pointedly carps, an English class. The scene is almost entirely performed in French, so the challenge that Dramaworks nearly bests is to communicate to the audience what is being said. But that requires the audience to invest their concentration as few plays demand.

But (we seem to say this over and over) among Lewis’ many talents as a director, is how he ensures that his cast understands every beat of even the densest play, so that even if the audiences can’t comprehend it all, the patrons know the performers do and, therefore, are willing to let it wash over them. In this case, even with a limited rehearsal period, Lewis has polished the pacing to a gem–like brilliance.

A side note: The play and many of its characters reflects a distinctly 20th Century British attitude toward homosexuality as something that is not spoken about or publically condoned, yet privately accepted almost as a quaint quirk rather than an alternative lifestyle.

The linchpin is McPhillamy. He has a slightly reedy high-pitched voice that sounds in several roles as if his characters are preoccupied living on some other parallel plane of intellectual pursuit, just a shade disconnected from “real life.” That dates back to our first notice of him as the philosopher in Promethean Theatre’s A Report on the Banality of Evil to the physicist in Dramaworks’ Copenhagen, even to his stunning turn as the demented ruler in Exit The King.

His fluid delivery of Hector’s pronouncements succeeds in making such an uncredible nimbleness of mind absolutely credible. Yet as McPhillamy’s owlish, shambling Hector takes a quiet delight in his studiously blithe ramblings, the actor finds the man’s submerged sadness as well.

But this is far from a one-man show and the entire cast is equally fine. Radosh, who played McPhillamy’s Queen in Exit The King and Donohoe’s wife in Buried Child, proves again that she is one of the finest actresses in the region. Her Mrs. Lintott melds an older woman perfectly aware of her supreme gifts as an educator yet quietly angry at being forced into second-class citizenship by a “civilization” that has relegated women to a tertiary role for millennia.

In many of his parts and certainly here, Burgess exudes a knife-edge intelligence often put in service of cynical, self-serving or unapologetically pragmatic pursuits. Donohoe, whose desiccated patriarch in Buried Child was simply one of the best performances anywhere last season, inhabits his ineffectual factotum.

The actors playing students, all young adults acceptable as characters a decade younger, succeed in creating distinctly three-dimensional personas that go beyond quick adjectives like “the class clown” and “the slow-witted jock.” John Evans Reese is the emerging gay student Posner; Nathan Stark is the handsome sexually precocious Dakin; Kyle Branzel is the narrator/theology student Scripps; Matthew Minor (who was the addled Ellard in the Maltz’s The Foreigner) is the comical Timms; Colin Asercion is Akthar and Jelani Alladin is Crowther, both nods to the multi-cultural reality of the modern Great Britain in which wealth transcends Anglo-Saxon snobbery; Mike Magliocca is the athletic Rudge, and Kristian Bikic, one of the region’s fast-rising performers, is Lockwood.

As always, Dramawork’s creative team is among the best in the region. The most obvious contribution is Victor Becker’s creation of hallowed halls of venerated academia with ingeniously sliding walls and a checkerboard floor that shows the scuffs of thousands of students going back a century. A nod is due dialect coach Ben Furey and French consultant Tangi Colombel.

Like Hector, Dramawork’s The History Boys demands a lot from its audience, but the rewards are equally rich.

The History Boys runs through Jan. 3 at Palm Beach Dramaworks, 201 Clematis St., West Palm Beach. Performances run 2 and 8 p.m. Wednesdays, 8 p.m. Fridays and Saturdays, and 2 and 7 p.m. Sundays. Beginning December 15, it plays a special schedule because of the holidays. Check the website or call the box office for details. Running time 2 ½ hours with one intermission. Tickets cost $64. Call 561-514-4042 or visit palmbeachdramaworks.org.

To read an interview with J. Barry Lewis about the production, click here.