Hard-Working Cast Can’t Save The Trial Of Ebenezer Scrooge

Posted on December 8, 2015 by Bill Hirschman 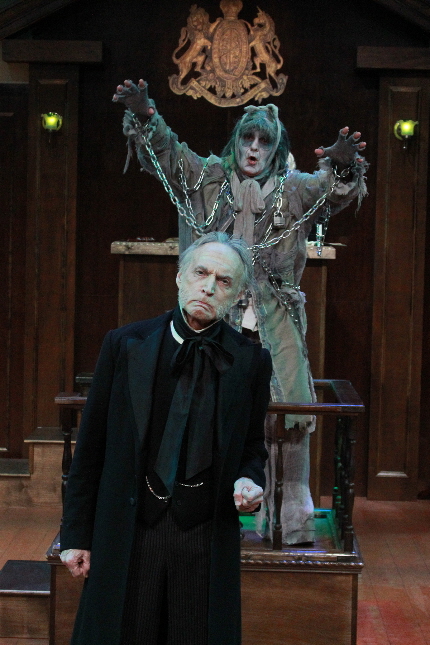 Wayne LeGette as Marley’s Ghost spooks Kevin Reilley as the title character in The Trial of Ebenezer Scrooge at Actors Playhouse / Photo by Alberto Romeu.

All through Actors Playhouse’s The Trial of Ebenezer Scrooge, a labored attempt at retelling Dickens’ classic from a different angle, I kept thinking of the same company’s wonderful 2011 production of Jacob Marley’s Christmas Carol, which, indeed, illuminated and expanded the source material thanks in part to a brilliant performance by Ken Clement.

And this production also features a talented cast working hard under the direction of David Arisco, but good grief, what a waste of the resources of Actors Playhouse on this lame script. For one hours and forty minutes (including intermission), the audiences waits and waits for a single new riff in the Scrooge story, even a shred of logic explaining Brown’s basic premise.

When that denouement finally stumbles into the light – a completely manufactured development — it makes only marginal sense and the evening stumbles towards a muddled hurried close.

Brown’s idea is that one year after Scrooge’s miraculous transformation, he has inexplicably, and we mean inexplicably, backslid completely. His renewed humbuggery has culminated in him suing Marley’s ghost and the three Christmas spirits for attempted murder, kidnapping, trespassing and several other crimes.

In front of a veddy British judge, Scrooge serves as his own lawyer to lay out his case, which is nothing more than to summon all of A Christmas Carol’s characters to testify slowly and at length to repeat all of the details of the story everyone knows – and that’s it. So even the title is wrong: It’s not the trial of Ebenezer Scrooge. The ghosts’ defense attorney is Solomon Rothschild, again inexplicably a Jew since the idea of the trial is defending the spirit of Christmas. His religion provides perhaps three lame jokes.

Crippling the entire evening is the trial structure itself as the two sides trot out one-by-one-by-one-by-one a procession of witnesses who dole out, oh so slowly, plot points and phrases that we already know in our sleep. Worse, Brown’s concept lacks even an iota of the straight ahead narrative through-line that makes Dickens’ tale welcome even on its 59th retelling.

I kept waiting for some twist, some unexpected development that would explain (a) Scrooge’s relapse and (b) why this play existed. There is a reason for (a), but it’s a tortured one and, again, it doesn’t show up until 9:45.

The only thing that saves the evening at all is never-say-die efforts of the cast and Arisco whose bottomless bag of comedy bits provide welcome spice. Brown does provide various bits of weak humor, but it’s the inventiveness of Arisco and the commitment of his cast that injects what genuine laughs exist.

On the asset side of the miser’s ledger, sharp-featured Kevin Reilley, who has played Scrooge before, is in his element giving Scrooge the appropriate perpetual scowl as he stalks around the witnesses. But Brown’s script required the always capable John Felix of the mellifluous voice to carry much of the show as the defense attorney.

Lindsey Corey, fresh off her performance as the pole dancing mother in Zoetic Stage’s Stripped, has a deft turn in the witness box portraying in fluid succession Scrooge’s rejected fiancé, his adoring sister and, best of all, a Kewpie doll Ghost of Christmas Past who coos the word “no” repeatedly under cross-examination.

Diana D’Ambrosio also plays a variety of disparate roles including a translator for the Ghost of Christmas Yet To Come – a seven-foot tall specter with a unintelligible digital growl played by Ryan Didato. Gregg Weiner is the gruff judge trying to keep the proceedings under control and Carl Waisanen, frequently a stage manager at Actors Playhouse, is his bailiff.

But special note is earned by Wayne LeGette who does double duty as Bob Cratchit and, in the funniest characterization of the evening, as the moaning woebegone Marley who sometimes looks and sounds like Peter Boyle singing “Putting On The Ritz” in Young Frankenstein. Now, he’s funny.

Bottom line: Actors Playhouse has been responsible for some of the best theater in the region, and its Jacob Marley’s Christmas Carol shows it can find thoroughly entertaining whimsical holiday fare. But in this case, your holiday cheer will be better served by watching a DVD of Mr. Magoo’s Christmas Carol or The Ref.

The Trial of Ebenezer Scrooge plays through Dec. 27 at the Actors’ Playhouse at the Miracle Theatre, 280 Miracle Mile, Coral Gables. Performances 8 p.m. Wednesday-Saturday, 3 p.m. Sunday, 2 p.m. Saturday. Running time 2 hours with one intermission. Tickets $50-$58. The theater offers a 10 percent senior discount rate the day of performance and $15 student rush tickets 15 minutes prior to curtain with identification.  Visit actorsplayhouse.org or call (305) 441-4181.