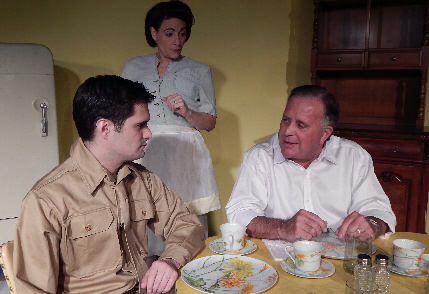 World War II veteran Timmy Cleary comes home to find that no armistice has been declared in the familial war that has raged in his parents’ home for more than 20 years.

Initially, scabs seem to have grown over the wounds, but they only camouflage the seething resentments and crippling baggage that have rubbed sensibilities so raw that an offhand comment rips open the deep gashes.

Parents Nettie and John hope Timmy’s homecoming will upend their numbing deadlock by creating two-against-one alliances, something Timmy wants nothing more than to avoid.

Such is the heart of the Frank D. Gilroy’s Pulitzer and Tony-winning play from 1964 The Subject Was Roses, getting a rare airing from the new Evening Star Productions in Boca Raton.

The production directed by Jeffrey Bruce, a frequent actor in local theaters, underscores the insightful, pungent and well-constructed script. But the valiant effort leaves far too much crucial passion AWOL – all that antagonism barely stifled at first and then unleashed, causing irrevocable damage. It’s a kitchen sink drama, so perhaps they all feared being too volcanic or falsely operatic, but more is called for.

It’s not a ham-handed or dull production by any means; but the shortfall between what we hear in the script’s potential and what we see on stage is frustrating. Throughout, the trio of actors seem to play only what’s happening at the moment without communicating that everything said and done results from two decades of uncivil civil war.

The play opens in the Cleary’s modest Bronx apartment the morning after a drunken celebration of Timmy’s return from the war in Europe. Timmy is asleep while Nettie (Elli Murray) and John (Alan Gerstel) banter in a flinty afterglow that their son has returned home when others have not. But when Timmy (Evan Gerstel) stumbles into the room, the parents begin jockeying jealously for his affection. In a kinder, gentler world, this family should be a triangle of equal partners, not a seesaw with Timmy as the fulcrum.

Over the next two days of beer-fueled maneuverings, the emotional baggage packed away for the benefit of the reunion snaps open and the laundry tossed around. Each parent’s youthful dreams that have been denied by the realities of life are explored; that is perhaps among the reasons for the discord – a fact that fuels Gilroy’s consistently compassionate view of these people.

The trio must find a separate peace. Timmy eventually tells his father something like, “I started out blaming you, then I blamed her, then I blamed myself. Now I don’t blame anyone.”

Murray gives the most believable performance of someone whose pearl-wearing place in a traditional household is always to keep things together by keeping emotions under control. Her Nettie is genuinely overjoyed to have a chance to smother her son once again, but simultaneously sees the opportunity to use him as a tool against John. Whatever else you may think of Nettie, Murray evokes the wistful ache of what-might-have-been in a monologue recounting the choice she made in her youth to hook up with the then-promising John.

Alan Gerstel, known as a television anchor and reporter in Palm Beach, has been in three supporting roles in musicals at The Wick Theatre down the road this past season. Physically, he is a perfect choice for John, once handsome and even dashing, his spirit and appearance has been dulled by age, the Depression and disappointments. This coffee salesman projects that Willy Loman weariness of someone who thought he had triumphed over a hardscrabble beginning but now wakes up to a disappointing present.

But Gerstel is always acting a part. We never quite forget that we’re watching a play. His John just seems grumpy rather than deeply troubled. Like Murray, he snipes at his marital partner, but the subtext of protracted hostilities isn’t evident. The danger, of course, would be slipping too far to the other end of the emotional dial of histrionics, but there seems little danger of that. He needs to invest more deeply in the character’s pain and disillusionment. Some of his emotional tones don’t quite land right either; in the second act, John is in a foul mood, but it’s not clear why.

The weakest on stage is Evan Gerstel. He does a passable job at communicating Timmy’s discomfort and anxiety at returning between the jaws of the vise. But there is a distinct lack of intensity and fire that the role requires; he seems like a pool ball haplessly buffeted around. Many actors have succeeded in the role in different ways, but the template came from the originator of the part, a young Martin Sheen who then specialized in blazing portraits of edgy disaffected youths. Bless Gerstel for trying hard, but his Timmy is a fuzzy, round-edged, even doughy character. Gerstel doesn’t communicate that Timmy’s sardonic view of life was not forged in the trenches overseas but in the trenches at home years earlier.

What Bruce and company do achieve is deftly depicting the slow disintegration of the shaky détente that the three have built and devoutly hope to maintain. They also make credible that a shred of diluted affection survives among them. Since the Gerstels are real-life father and son, a shade of chemistry can be perceived there, although Gerstel senior and Murray exude more of a shared history.

Bruce may not have a lengthy resume as a director, but he does a serviceable job pacing the play and ensuring that the talky proceedings never seem visually static. He weaves in some nice touches such as when Nettie in a rare moment of accord reaches out to touch John’s arm and he flinches away. Bruce selected this play and his affection for it shines through.

Evening Star doesn’t have much money for sets, but credit is due Denise Scholle who hunted up period perfect appliances and past-their-due-date home furnishings to summon up a credible recreation of the era and the Cleary’s socio-economic status.

Despite all the welcome focus on new works in South Florida, Roses is part of a recent run of “period pieces” that remind us or deliver to a new audience a glimpse of what theatergoing used to be back – dare I say it – a half-century or so ago.

Thematically, dysfunctional families and flawed tragic protagonists date back at least to Lear and Medea, but the post-war world of American popular culture — in which theater then figured prominently — focused to an unprecedented degree on then contemporary introspections of the cracks in painfully recognizable depictions that rejected the escapist fare of the pre-war years. Tough businessmen legendarily broke into tears watching Death of a Salesman.

Roses debuted in May 1964 starring the sturdy film and stage character actor Jack Albertson (unfortunately known by a later generation as The Man in Chico and The Man); Irene Dailey, a veteran stage actress now nearly forgotten, and Sheen. When the play was memorialized four years later on film, Dailey’s part went to Patricia Neal – her first major role after partially recovering from her stroke.

Gilroy’s script is such meaty material, so well-constructed and so inexpensive to produce that it gets revived here and in New York about every decade or so. It was last seen on a major stage here in 2007 at Palm Beach Dramaworks and in a well-received production at The Caldwell Theatre in 1997 directed by Charles Nelson Reilly.

Evening Star is a young company that just produced a rollicking A Comedy Of Errors in its small theater where Sol Children’s Theatre is based and it will mount The Gin Game in February with Jim Gibbons. It’s a fledgling company worth watching in the future.

But this production is like watching an emotional knife fight with blades that need sharpening.