Freaky Friday Is Fun For Kids, But Resonating For Adults 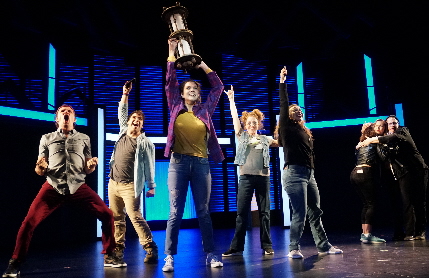 Put aside your expectations that the musical Freaky Friday is going to be yet another manipulative Disney raid on one of its popular film titles, designed primarily for parents and their offspring who fondly recall one of three cinematic versions.

Instead, Slow Burn Theatre Company has delivered a thoroughly enchanting evening, one of most polished and downright fun productions it has offered in recent years without any sense that it is coasting for a mainstream audience. This tale of a mother and teenage daughter who magically switch bodies for a day is both a comic delight and a quiet contemplation of what is lost and what is gained when grownups leave adolescence behind.

But integral to what makes this production mesmerizing under director/choreographer Patrick Fitzwater’s leadership are the two central performances of Laura Hodos and Kimmi Johnson. Their creations burn with so much joyful exuberance and shine with so much highly skilled but carefully camouflaged acting that their work must be visible from outer space.

Hodos, an Orlando-based actress who works here often enough to deserve a condo, is one of the region’s musical theater treasures with an expressive clarion voice, a mobile face and innate comic timing. Just a few highlights from the past season or two: the title character in The Drowsy Chaperone, the Lady of the Laker Girls in Spamalot, Abigail Adams and John Hancock in 1776, and the wife in The Will Rogers Follies.

This part calls on all of her strengths at once. There’s that bravura voice that can be sweeter than nectar one moment and squawk like a truck driver the next. She has a command of body language to illustrate where a character is in a developing arc. When she is playing the frantic mother Katherine, the character is clearly a harried but carefully controlled adult. But when Katherine is inhabited by daughter Ellie’s spirit, she transforms physically — limbs flying every which way and rubbery expressions of panic as Ellie realizes she is way out of her depth. The comedienne can also play the poignant moments such as when Ellie-inside-Katherine sings a lovely lullabye ballad to her sleeping little brother.

Johnson, who we first saw as the odd-shiksa-out in Main Street Players’ Bad Jews, looks at first blush like a lovely fresh-faced head cheerleader with an adorable visage and a winning winsome smile that would melt the coldest heart. But the actress, here and in earlier roles, has no need to rely on her charismatic appearance. We have no trouble buying Johnson first as a socially and emotionally awkward misfit battling a secret sorrow as she tries to navigate the horror show known as “Being 16 Years Old.” Her wild energy in the electric opening number “Just One Day” is pure manic teenager. With the ends of her long brown hair dyed a color green not found in nature, Johnson/Ellie’s face virtually glows with ebullience and displays mortification at her mother. But the switch changes her physicality into someone more in control of her body language. A subdued mien requires Johnson to tamp all that down and yet still be an engaging persona. Johnson perfectly exudes Katherine-in-Ellie’s sense of “Oh, God, that’s right, that’s what being a teenager was like,” but also discovering that coping with those classic problems is a bit different in 2018.

The story occurs on the day that Ellie wants to participate in an annual late-night scavenger hunt (to impress the hunky classmate Adam) on the same evening of her mother’s wedding rehearsal dinner. It’s a doubly major event because Katherine is a struggling event planner-caterer whose nuptials are being covered by a national magazine. Katherine has found a nurturing new beau in Mike, but Ellie has refused to make peace with the relationship or him because she has never gotten over the premature death of her father. That angst combined with all the classic problems of been a teen have driven her to acting out, cutting class, secretly getting a tattoo.

During intense bickering over the inevitable conflict of the coming evening, they grasp a giant hourglass willed to Ellie by her father. It inexplicably transfers each person’s mind into the other’s body.

While they search for a solution, both have to live each other’s lives because they fear everyone will think they are crazy. It involves Katherine going to school for Ellie, and Ellie trying to prep the wedding for Katherine. At one point, they both end up a disastrous parent-teacher conference to discuss Ellie’s misbehavior.

This comically stumbling walk a mile in each other’s shoes is illuminating as they try to navigate shoals they never knew or forgot existed. By the finale at the wedding the next day, each has developed empathy for the genuine travails of the other’s life and brings them to reconciliation, compassion and increased affection. 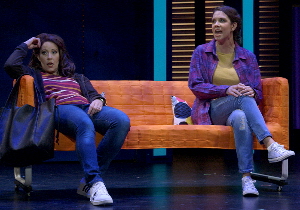 The post-switch body language of Laura Hodos and Kimmi Johnson / Photo by Michael U.

The aforementioned shattering of expectations is due in part to this edition’s lineage. The show is based in part on a 1972 children’s book by Mary Rodgers (Richard’s daughter and co-writer of Once Upon A Mattress). That property was made into a movie by Disney three times: 1976 with Barbara Harris and Jodie Foster; 1995 with Shelley Long and Gaby Hoffmann, and 2003 with Jamie Lee Curtis and Lindsay Lohan. But according to my seatmate, Daniel, far more knowledgeable about this than I, this musical version barely retains the basic premise and just uses the films as a jumping off point.

This incarnation is a strange rarity. It debuted in 2016 at Signature Theatre outside Washington, D.C., and has only played regional theaters, never Broadway. That’s short-sighted on Disney’s part because, based on the Slow Burn’s production, the raw material has more quality than a lot of other similar pieces that have played the Great White Way in recent years.

The added dimensions come from several sources. It has a better than expected script by Bridget Carpenter, an award-winning playwright and contributor to TV’s Friday Night Lights. For instance, she sets ups conversations that are both funny and painful when people say something confidential about Ellie to Katherine when Ellie is inside her, and visa versa. Carpenter’s set-ups to the music are inspired such as when Ellie-in-Katherine discovers her mom’s hidden cigarette stash and Katherine-in-Ellie discovers her daughter has a hidden tattoo.

The pop score with a bit of rock n’ blues is by Tom Kitt and Brian Yorkey, best known for their brilliant dissection of a troubled family with a mentally ill mother, the Pulitzer-winning Next To Normal. Kitt’s music is by turns peppy and heartfelt; Yorkey’s lyrics are quite nimble and quick witted.

Most of the score is intentionally comic, making fun of the heroines’ discomfort, but there are the obligatory Disney songs about self-acceptance in which everyone realizes they have learned something about themselves.

In “Oh, Biology,” Johnson as Katherine-inside-Ellie suddenly remembers how upsetting it is to have teenage hormones running uncontrolled in your body when in sudden proximity to your secret crush.

Hodos as Ellie-inside-Katherine, feeling her father’s death and her mother’s marriage are betrayals, delivers a bitter tirade to her little brother in “Parents Lie.” Remember, the boy thinks it’s his mother talking. Then later, she tries making amends in the gorgeous “After All Of This And Everything.”

And the production numbers are irresistibly rousing like that “Just One Day” opener and the comic kick-butt revival tune when the brother has run away, “Bring My Baby (Brother) Home.”

Musical director Paul Tine is a new face who molded the blazing vocals and leads the live band of Julie Jacobs, Dave Wilkinson, Guillermo Gonzalez, Tom Stancampiano, Wes Anthony and Liubov Ohrimenco – most of whom are Slow Burn regulars.

Set designer Michael McClain has created a day-glo environment of corrugated squares illuminated with a palette of electric colors.

Freaky Friday is another example of how Slow Burn keeps upping its quality and its reputation almost regardless of its material. Granted, this and the imminent Legally Blonde are not kin to its triumphant drama Next To Normal. But the company founded in 2009 by Fitzwater and Matthew Korinko and led by president Mark Traverso has always alternated ambitious serious work with certified hoots.

Tonally, Freaky Friday falls somewhere between those genres, meaning grownups will enjoy it as much as children. Heck, they can even come by themselves.

Freaky Friday presented by Slow Burn Theatre Company through Nov. 4 at the Amaturo Theater, Broward Center For The Performing Arts, 201 SW 5th Ave., Fort Lauderdale. Performances are Thursday through Saturday at 7:30 p.m., and Sunday at 2 p.m. Running time about 2 hours 30 minutes including one intermission. Tickets are $25-$65. Call (954) 462-0222 for tickets, at www.browardcenter.org or #Ticketmaster.com; in person at Ticketmaster outlets or the Broward Center’s Auto Nation Box Office. Info at www.slowburntheatre.org 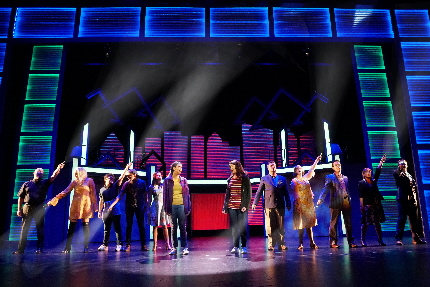 Join us for Slow Burn Theatre Company's production of Disney's Freaky Friday, a new musical from the writer’s of TV’s Parenthood and the Pulitzer Prize-winning songwriters of Next to Normal. Performances now through Nov 4.

Posted by Broward Center for the Performing Arts on Saturday, October 20, 2018