Posted on December 4, 2021 by Bill Hirschman 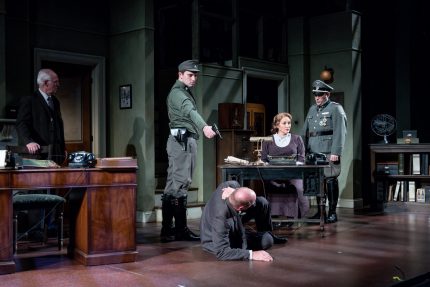 A large swath of theater always has been political: sometimes overt like David Hare’s Stuff Happens, sometimes allegorical like Arthur Miller’s The Crucible. And sometimes, like the world premiere of The People Downstairs, their relevancy only magnifies as current events overtake them.

Michael McKeever’s harrowing play at Palm Beach Dramaworks about the Dutch people hiding the Anne Frank family has at its core those universally timeless themes about decency and courage to be found in ordinary people in extraordinary times rather than fictional film heroes facing manufactured crises.

But it is impossible to ignore the timely deafening parallels between the rise of fascism that used anti-Semitism to seduce an angry populace — and the rise of disenfranchising power grabs in our own time, often fueled by appealing to racism and anti-Semitism.

Done subtly throughout, one scene makes the connection shudderingly unavoidable. An elderly manager in the Franks’ old business (with the Franks hiding upstairs) is listening to the radio as Hitler rants his bile to a crowd of screaming acolytes.

KOOPHUIS: Listen to them. They’re just people. Every day, average people. They could be you or me.
MEIP: We are, in no way, like those people.
KOOPHUIS: But we are. The difference is, they’re afraid. They’re afraid of what’s foreign to them, of what they don’t understand. And he feeds into it. He feeds into their fear of others. Their fear of what’s different. He articulates all the horrible thoughts that are in their heads. He gives them voice. He screams these thoughts – these horrible thoughts – out loud and wraps them up with a pretty bow of national pride. And people love him for it….  Mind you, there’s nothing new about any of it. This sort of thing has been around ever since man learned to walk upright. I myself have witnessed it several times in my own lifetime. Fear. It’s all about fear. He understands this. And so he rants and rails, and spits out lies. And they can’t get enough.

And a young employee recalls a conversation he had with the now “missing” Mr. Frank: “The next day … when we heard on the radio that the Nazis had marched into Austria. Mr. Frank put his hand on my shoulder and said, “Don’t worry, my boy, it’ll never happen here.”

The play portrays human beings with such recognizable virtues and flaws, strengths and weaknesses, that we are forced to ask ourselves what we would have done then, and, yes, what would we do if the nightmare returns.

Set completely in the upstairs office of the business Frank owned, we watch a group of co-workers right after they have hid the family in an attic above the office, and follow them until the tragic climax. We never see the Franks, only hear a muffled voice from above once, a few creaking floorboards and the thump of a falling body.

But in this, the play has an ally in its relationship with the audience – we know how this turns out – and that overlay colors the entire evening with the knowledge that the growing encroaching threat outside the building has fatal consequences.

During the two years, we hear the employees telling each other each day at work about the latest horror such as families and neighbors being dragged out of their home, leaving only a bloodstain on the floor.  It is a noose-tightening nightmare coming true, both then, and if you are so politically inclined to believe, on the cusp now.

A phone rings as it would normally during a normal day; everyone stops talking, stares at the instrument and waits a moment to decide whether to answer it. Those ominous European police sirens pass by, a warning that someone’s future has been cancelled. The colleagues are often, very often glancing up the unprepossessing curving flight of stairs to an unremarkable plain door overarching the office literally and figuratively.

We watch this extended family of increasingly worn down colleagues as nerves fray and determination wavers. There are moments when you have to wonder if someone will succumb. You might have trouble blaming them if they did.

Our narrator looking back on what she lived through is empathetic pillar of the effort Miep Gies (Amy Miller Brennan) and her colleagues, the avuncular Mr. Koophius (Dennis Creaghan), the solid office manager Mr. Kraler (Tom Wahl), the ever-frightened and quarrelsome Mr. Visser (McKeever) and Miep’s activist husband Henk (Bruce Linser) who doesn’t work there but returns nightly to walk his wife home through the treacherous streets.

All the characters are real people except for Visser whom McKeever invented to insert a perpetual danger that someone might lose their nerve and betray the Franks.

The cast guided with William Hayes’ invisible hand simply become these people. Occasionally, these ordinary people can lose their temper, break down and otherwise let emotions slip out. But the tenor of the evening is somewhat dictated by the fact that people are required to curb the emotional tumult inside, to stay as imprisoned as the Franks. That, frankly, is the sole remaining challenge as far as narrative drive since everybody and everything is tamped down for all but for those few outbursts. The tones throughout are tense, contemplative or elegiac.

McKeever, who is equally well known for farces such as Clark Gable Slept Here and dramas like Daniel’s Husband, gives these characters multiple dimensions and whose innate humanity is sorely tested.  A year into the task, Miep tells us with quiet rue, “You hate what you’re becoming. It starts off benign enough. Just a slight tingle in your belly when you hear on the BBC about German defeats in the East. But, battle by battle – casualty by casualty – life by life – the more you learn, the stronger your reactions become. And before you know it, you find yourself gloating . . . no, worse . . . reveling in the deaths of German troops. Each new report fills you with a quickening rush of emotion. The Battle of Stalingrad leaves 250,000 Germans dead. And to your own dismay . . . this excites you. Casualty after casualty after casualty. Life after life after life.”

Indeed, these people wrestle with erosion of trust and have an ambivalent relationship with hope. Miep says, “These days, hope has become a cherished if somewhat scarce commodity. And yet, you hold onto it. Like a drowning man grasping a piece of flotsam on a stormy sea.” And then after the Normandy invasion, “And slowly . . . very slowly . . . you dare to hope again. All the while knowing that hope can be a very dangerous thing.”

The entire ensemble slips into a whole but everyone has moving monologues that the actors savor to illuminate their characters. Miller Brennan convincingly makes Miep both the strength that everyone relies upon as well as someone terrified by the world around her. McKeever is memorable as the nerve-jangled, terrified colleague. Wahl exudes leadership yet also depicts the quiet disquiet and uncertainty under his seemingly solid management. Creaghan is inspiring as the ailing elderly manager who nonetheless provides a calming center. Linser evokes the sense of courage to fight back.

We don’t want to spoil anything – ask me after the end of the run of the show – but one character under extreme pressure breaks down in tears in the most breath-stopping moment of the show and one of the finest acting moments in that performer’s career.

The play was the brainchild of Hayes, the co-founder/producing artistic director of Dramaworks and the director of this work. After seeing the 1959 film of The Diary of Anne Frank, he became intrigued by the unseen people hiding them.

As part of the company’s ongoing commitment to developing new work, Hayes commissioned McKeever to write about the real people including Miep who rescued Anne’s diary and who died in 2010 at the age of 100.

We saw the first live on-stage reading of the piece and one of the subsequent Zoomed readings during the worst of the pandemic (so far) – with most of this cast, all of who are veterans of previous Dramaworks’ offerings. The efforts were undeniably promising, but it screamed out for the kind of interaction that only a full production can deliver.

As always, Dramaworks’ creative staff under Hayes’ leadership creates a mood-evocative environment: Michael Amico’s grey time-worn office punctuated by Doug Wilkinson’s props, Brian O’Keefe’s modest business office attire, Kirk Bookman’s emotion-underscoring lighting and Roger Arnold’s soundscape which was crucial to bringing the terror outside into the office – and all of it supervised by stage manager Suzanne  Clement Jones. Also in the cast are Matthew Korinko and John Campagnuolo.

Amid the inevitable tragedy, McKeever, Hayes and company deliver rays of “cautious optimism” about humanity, starting in the very fact of these people’s resistance to evil.

And late in the play, a young Jew emerges from hiding to join the organized resistance with his uncle. He tells Miep, “All this time, I’ve just been sitting here, hiding. Doing nothing. There’s too many people doing that already. When Henk first told me I had to leave (hiding), I was angry. But now I realize he was right. It’s time. The time has come to actually do something. I’m tired of hiding. I want to make a difference…. When (my uncle) picked me up today, he said something smart, I think. He said it’s the trying that makes a difference. It’s the trying that wins wars.”

Covid Protocol: Dramaworks is especially serious about Covid prevention. All patrons will be required to wear masks that completely cover the nose, mouth, and under the chin for their entire visit. Anyone who does not comply will be escorted out of the theater. Dramaworks will also require documentation (printed or digital): Fully vaccinated guests have the option of voluntarily presenting documentation showing full vaccination status. Alternatively, all guests can present documentation of a negative COVID-19 PCR test result conducted within 72 hours prior to the performance, or a negative COVID-19 Antigen test result conducted within 24 hours prior to the scheduled performance start time.