How Your Sausage Is Made in D.C.: GableStage’s Kings 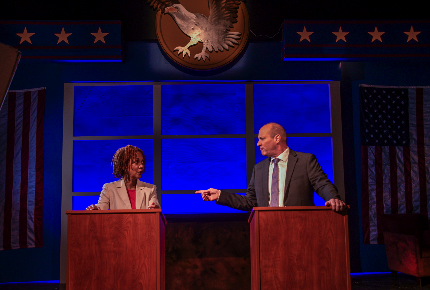 Art for adults long ago relegated Schoolhouse Rock’s “How a Bill Becomes A Law” cartoon to the status of Santa Claus and the Easter Bunny.

The American annals go back at least to the Pulitzer-winning State of the Union in 1946, through The Best Man and The West Wing, culminating in House of Cards.

But few have been as ruthlessly photographic depicting the pornographic incest of lobbying and corruption as well as the clash of idealism and pragmatism as Sarah Burgess’ Kings, currently on the dissection tray at GableStage.

It’s easy to get discouragingly lost in Burgess’ intentionally intricate relationships that dizzy we outsiders as power players jockey through a world of influence, money and power. But hang in there, audience members, most of the Byzantine details become clear if you continue to pay attention. Besides, you can just take a step back and appreciate the breath-robbing view of the dark dangerous forest instead of trying to identify the genus of the trees.

Burgess’ 2018 play also weaves copious humor including ego-deflating zingers in and around the unsparing depiction of soulless lobbyists mounting hard-to-resist verbal and fiscal assaults on the legislative process.

On paper, her story centers on Sidney Millsap, an idealistic neophyte congresswoman from north Dallas who improbably has won a special election a few weeks earlier. A former accountant for an oil company, the African-American war widow is bracingly straightforward and honest without being naïve. In her mind, she owes nothing to no one except to do right by her constituents, even if it alienates the power brokers in D.C. especially the lobbyists representing moneyed clients who fund reelection campaigns.

Played by the wonderful Karen Stephens, Sidney is not some dewy-eyed Mr. Smith Goes To Washington, but a strong-willed sharp-talking someone who simply believes in and is committed to the underlying tenets of representative democracy.

She tells a lobbyist, “We’re a country that has done some evil things. We have a lot of flaws. But at least, the thought was: the citizens run the place.” But she’s not blind. She tells the lobbyist: “You and I can watch together as our politicians try to pretend their spines are made of anything stronger than warm queso.” And when she catches a lobbyists in a hypocrisy, the lobbyist says, “We don’t have to get into the weeds.” Sidney replies with a skeptical smile, “I like the weeds.”

But she immediately runs into rough water as she supports a doomed bill that would close a loophole allowing private equity investment brokers to bypass paying taxes. That immediately puts her at odds with and in the crosshairs of lobbyists Kate (Diana Garle) and Lauren (Leah Sessa), as well as the bill’s behind-the-scenes guru, John McDowell (Tom Wahl), the veteran senator from her home state.

Her inevitable loss on that front only encourages her to double down and challenge McDowell for his seat in a primary. The depiction of ensuing machinations are a scathing indictment of how your sausage is made.

Director Joseph Adler wisely moves the 90 minutes like a whitewater torrent, which only underscores the seeming impossibility of us mortals understanding, let alone controlling, the rapids. But he ensures that his cast knows precisely what they are saying and how the moving parts interlock, so that if it takes the audience a while to get inside the flow, we feel comfortable that those driving the vehicle know where they’re going. And we’ve said this before: Adler is an expert at making compelling the static sight and sound of two people just sitting and talking.

Stephens embraces Sidney’s acerbic attitude of I’ve got no tolerance for disingenuous hypocrisy and what we both know is horse manure. The actress’ voice and smile communicates Sidney’s intelligence and integrity as well as her knowing wariness of someone who knows she is swimming upstream in foul waters.

Garle and Sessa both excel in portraying young lobbyists whose unquestioning abandonment of integrity has reached condescending disbelief that anyone would expect anything different. Sessa inhabits someone who doesn’t think of herself as a sellout, only someone who knows that it’s foolish not to realize that gravity is inexorable. Garle’s Kate starts off in the same mode, but with a hint of the decency she has stored in a lockbox and which will begin to nudge its way out during the evening.

Wahl also does a terrific job portraying the ultimate Washington power player who doesn’t resent being faced with Sidney’s idealism; he even respects what she can bring if he can inveigle her to his team. His genuine genial persona makes him impossible to dislike let alone hate.

One of the four stupidest things actors get asked regularly is “How did you memorize all those lines?” In Burgess’ case, the question is reasonable with her unrestrained tidal wave of verbosity – and less than three weeks rehearsal. There were a few moments opening night when the actors tripped briefly, but 99 percent of the time, the words flowed out and interacted with a smoothness that was, in itself, a wonder.

Burgess lacerates revolving doors, lazy politicians relying on lobbyists for their view, and a world of fund-raising dinners and gentle arm-twisting meetings. She did a similar number on big business when GableStage mounted her Dry Powder two years ago.

In mid-May in 2019, Kings may not tell us anything we didn’t sense already, but it certainly is a stinging rebuke to our acceptance of the status quo and an implicit call to arms for next election cycle.

(Full disclosure: This critic served for several years as a co-host of Spotlight on the Arts interview program on BCON television with Karen Stephens.)