Funny & Tragic Pursuit Of Fame In The House Of Blue Leaves 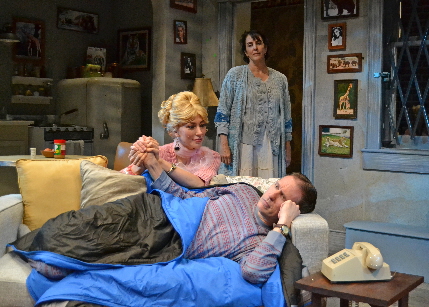 Bruce Linser is attended to by mistress Vanessa Morosco while his wife Elena Maria Garcia looks on in Palm Beach Dramaworks’ The House of Blue Leaves / Photos by Samantha Mighdoll.

No matter the lessons of Willy Loman, few realize the false seduction of The American Dream.

In the opening scene of The House of Blue Leaves, the doomed-to-lose composer Artie is desperately trying out his mediocre pop songs at a Brooklyn lounge’s amateur night.

The ditties, hilarious in their mediocrity, aren’t landing. From behind the piano, the distraught Artie calls out to the stage crew, “You promised me a blue spotlight.” That yearning for attention is a perfect crystallization of the ensuing two hours which mixes breakneck farce, absurdist black comedy, zany characters and quiet poignant compassion for those who have sold their soul for an imagined self-validating prize of success and fame.

John Guare’s 1971 masterful early work gets as funny and touching a production from Palm Beach Dramaworks as anyone can ask for. Its virtues include superb direction from J. Barry Lewis, a flawless creative team and a wall-to-wall cast of actor-clowns willing to bury themselves inside the comically off-kilter and profoundly flawed characters. Bet on almost everyone and everything here to be nominated in next year’s Carbonell sweepstakes.

None of these efforts can be taken for granted; we saw a star-studded 2011 Broadway revival that fell flat. The challenge is that Guare, who later wrote the far different Six Degrees of Separation, penned a voluble script that often morphed seamlessly between comedy and pathos, and often subsumed one under the other without either getting lost.

In Guare’s plot, the Pope’s motorcade is soon to pass through Brooklyn near the rundown apartment Artie (Bruce Linser) shares with his dowdy certifiable loony wife Bananas (Elena Maria Garcia). What she may or may not quite realize is that Artie plans to commit her to an asylum solely so that he can marry his brassy mistress Bunny (Vanessa Morosco). They plan to emigrate to California to restart his career through boyhood friend and movie producer Billy Einhorn.

While plotting to have the passing Pope bless Artie’s sheet music, the couple openly plan their elopement which will free the sexually-incompetent Bunny to send Artie into lust-filled paroxysms with her cooking.

Every time Bananas’ quirky behavior is poised to erupt (like falling on the floor and panting like a puppy), Artie pushes pills into her mouth. She pleads pitifully, “Let me have an emotion…. Let the animals come out.” And later, “I don’t mind not feeling anything as long as I can remember feeling.”

By the second act, the apartment will be hosting three errant nuns wanting to see the Pope, Artie and Bananas’ Vietnam-bound son Ronnie who is AWOL and intent on blowing up the Pope, and Billy’s starlet girlfriend Corrinna Stroller who went deaf in a film explosion gone awry.

In a madcap series of farcical mishaps and misunderstandings, nothing goes off as planned.  But under the considerable humor coming out of this bizarre menagerie’s interactions, there is a tragic undercurrent. Confronted with the trappings of celebrity hyped in movie magazines and even the attention lavished on the Pope, these people hunger for similar fame as an endorsement of their self-worth.

In their pursuit, profoundly frustrated people like Artie and especially the blithely pragmatic Bunny are willing to push aside anything and, more importantly, sacrifice anyone. Guare simultaneously makes us revolted by this but also makes it resonate in our own longings, creating a weird kind of compassion.

Lewis, one of the most skilled directors in the region across an eclectic array of genres, molds this brilliantly. His never-flagging pace still allows the cast to romance Guare’s stylistic dialogue and monologues delivered to the audience. He ensures the audience can savor Guare’s humor and the insights. He embraces the absurdities of the plot and characters yet somehow keeps everyone recognizable human beings rather than cartoons.

Much of that facet is due to the energy and skill of the cast. Garcia is a legendary comedienne who co-wrote and performed the one-woman Fuácata! for Zoetic Stage. Her ability to be gut-bustingly funny and heart-breakingly pathetic as the unhinged about-to-be deserted Bananas is a masterpiece of acting. In one aria, she relates a story born of delusion that simultaneously exposes her relatable vulnerability and unique dementia.

Linser, who directed Dramawork’s outstanding musical Spitfire Grill this season, delivers a character completely different from the shy Man In Chair that he created for The Wick Theatre’s The Drowsy Chaperone. Watch his smile when he compulsively creates insipid lyrics and lame melodies on the fly. He, too, is able to make you aghast at what Artie is willing to do to his wife, yet he makes you understand why. Artie’s complete surrender to the pursuit of fame and visible yearning almost hurts to see as the 40-ish zookeeper-by-day says repeatedly, “I’m too old to be a young talent.”

Morosco, who was the acerbic academic in Dramaworks’ Arcadia and patient wife in the Maltz’s Disgraced, constructs the bold explosion of ruthless ambition and clueless naiveté of the classic ditz Bunny. A complete and willing convert to the cult of celebrity, Morosco builds a Bunny whose complete frame of reference is pop culture.  Speaking of the Pope’s visit, she says people haven’t gotten so excited since the premiere of the movie Cleopatra. “It’s that big,” she avers. Certain of her taste,  Morosco’s Bunny declares she can spot greatness, such as the first time she heard the song, “Mairzy Doats.”

Garcia, of course, is renowned for her comedic skills, especially her physicality. But Lewis has the entire cast here equally as animated, with limbs gesticulating and mobile faces providing uncensored views into their characters’ thoughts. For instance, most of them frequently outstretch their arms with their fingers spread open as if offering themselves.

The entire cast is just as good: Austin Carroll, a horse in Equus, as the dangerously demented Ronnie; Margery Lowe as the eager to please starlet; Elizabeth Dimon as the head nun keeping order with a referee’s whistle; Irene Adjan as a sharped-tongue nun; Krystal Millie Valdes as “the little nun” whose vocation is shaky; Jim Ballard as the Hollywood denizen Billy; with Pierre Tannous and Timothy Bowman helping out.

Also, no vocal coach is credited, but everyone’s Brooklyn enunciation is dead perfect, especially Morosco’s Bunny whose clarion accent sounds like a barrel of cut glass being emptied into a garbage truck.

House premiered off-Broadway in 1971 with Harold Gould and Anne Meara.  While that production was acclaimed and honored with awards, most people remember the play through a 1986 revival with Swoosie Kurtz as Bananas, John Mahoney as Artie and Stockard Channing. That version, subbing Christine Baranski for Channing, was broadcast on PBS’ American Playhouse in 1987.