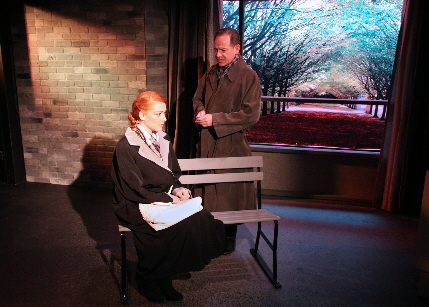 The intimacy of Island City Stage’s production of The Pride inside the Empire Stage space adds an extra layer of closeness to an absolutely enthralling production. Pair this with artistic director Andy Rogow’s sensitive and seamless direction, along with his selection of actors who know how to inhabit roles and not merely play them, and Alexi Kaye Campbell’s British drama bursts at the seams with courage.

Campbell’s superb play, so deep in its character studies, switches between two plots with characters who share the same names, and also alternates between two very different eras — 1958 and 2008. Both settings are London, England.

In the 1950s scenes, Philip, a bored real estate agent, and Oliver, a children’s book writer, find their lives intersecting after Philip’s wife, Sylvia, a former actress and now book illustrator, invites her husband to meet her new employer, Oliver.

The Oliver of the 21st century is a freelance journalist who has felt lost in life since his early teens (“He’s a good boy, but a bit of a lost soul,” Oliver recounts his aunt saying) and continues to wrestle with the hole in his soul. When his lover, Philip, leaves him, Oliver is forced to take a look at his infidelity and his addictions. As he grapples with realizations, he seeks consolation in his best friend, Sylvia, an actress.

While there may be some hint that the lives of this trio will somehow interconnect with the 2008 characters, what lies beneath the surface is that the eras are more pertinent than the characters — the device serves as a way to present different, yet similar glimpses of the human experience: soul searching as it relates to sexual identity and the loneliness that these questions can impart about life.

The actors play double duty in both eras — Michael McKeever as Oliver, Bruce Linser as Philip, Faiza Cherie as Sylvia, and Sean Dorazio as a play-for-pay sex provider (he comes to Oliver’s pad dressed as a Nazi) and also as the editor of a men’s magazine. Dorazio also has a minor role in the 1950s era as a doctor counseling Philip before he undertakes a brutal form of aversion therapy.

McKeever’s deep understanding of Oliver’s worlds, both in the 1950s and in the character’s modern incarnation, makes his characterizations utterly flawless. He provides his early era Oliver with an uncertainty that his later era Oliver doesn’t not possess — in fact, that Oliver has a bit of an overbloated swagger — which creates a beautiful juxtaposition of the two. And not to take away from the other actors in the play, who have many of their own strengths, but McKeever seems to infuse his roles with a depth that comes from his inner work.

A particular dramatic scene at the end of Act 1 is skillfully played by both Linser and McKeever. However, Oliver’s pain is so effectively and purposefully realized by McKeever that it commands a heart-stopping stillness. It is one of the finest, albeit poignant moments in the play and perhaps seen on a local stage in some time (so much so, it brought real tears to this critic’s eyes).

Linser plays Philip close to the vest, yet as buttoned up as the character seems, Linser is able to convey the sexual tension and Philip’s struggle to quell his desires. When the 1950s character snaps at the end of Act 1, it’s as if all of his hell has been released. Philip’s fury is real and the audience feels the sheer force coming through Linser’s portrayal.

Cherie, as the troubled Sylvia in the past era and the bold Sylvia in the present, perhaps has the most difficult role. The character, especially the 1950s Sylvia, isn’t as fully drawn by the playwright as the two male leads. There are glimpses into Sylvia’s depression and loneliness, but there isn’t enough focus given to her plight. The character comes off as a supporting player merely there to assuage the dilemmas of the two men. “My face is the face of a woman who has forgotten herself,” says 1950s Sylvia and though the words are spoken, we never are really given the precursor to see the blankness. This is especially problematic at the end of the play when Sylvia delivers the denouement  — a heartfelt soliloquy that should create a final ka-boom after so many seismic moments throughout, yet it seems more like a flicker than flame. Whether it is the fault of this production and its direction, or a problem in Campbell’s script, is difficult to decipher.

Dorazio offers comic relief in his supporting role and he knows enough not to overplay it so as not to dilute the play’s seriousness.

Perhaps what serves as the overarching perfection in this production is Rogow’s direction. His vision is masterful in a play that calls for a lot of nuance. He nails it as he weaves his characters in and out of eras. When an early era character needs to enter a later era scene and vice versa, the lighting, costumes and direction make it seem ghostly, never disturbing the action, but enhancing it. It is a beautiful, artistic rendering. The ending, however, falls a bit flat since there is such heightened energy and almost sheer perfection throughout.

Kudos goes to Rogow for adding dialect coach Kathryn Johnson to work with the actors on the production. The accents, perfectly believable, were an essential piece that added so much to create a necessary reality.

Peter A. Lovello’s costumes, especially his ’50s era choices for Sylvia, serve to complete the palette of the show as does Michael McLain’s set that has to work in two very separate eras. He ingeniously shows the passage of time by utilizing a laptop on a back bar that is closed to reveal an Underwood typewriter to signal the early era.

This production of Campbell’s thought-provoking The Pride understands the beauty and depth of this remarkable play —and, done right here, makes us question our history, both individually and collectively. Island City Stage has much to be proud of with The Pride.

The Pride runs through June 22 on Thursdays, Fridays and Saturdays at 8 p.m. and Sundays at 5 p.m. at Empire Stage, 1140 N. Flagler Drive, Ft. Lauderdale. Running time is an hour and a half for the first act and 45 minutes for the second act with a 15-minute intermission. Tickets are $30 and may be reserved at islandcitystage.org or by calling the box office at 954-519-2533.