Mad Cat’s Well-Named Mixtape Is Quirky, Passionate, Puzzling And Did We Forget Funny? 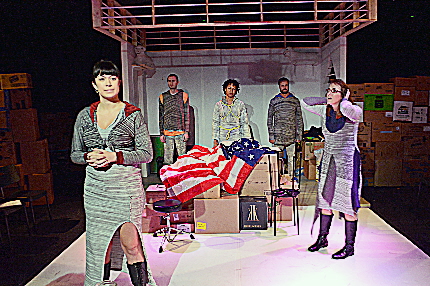 Mixtapes are by definition quirky, passionate, uninhibitedly self-expressive to the edge of self-indulgence, sometimes puzzling, sometimes touching, sometimes hilarious. They’re such a highly personalized reflection of the creator that the tracks’ connective theme or mood may be lost on most people, and yet the listener doesn’t care if the insights and selections are intriguing and revelatory.

Mad Cat Theatre Company’s theatrical/cinematic Mixtape 2: Ummagumma Forza Zuma! is all that. Like its 2008 predecessor, this curried and curated compilation of 23 playlets, snatches of poetry, music videos and short films reflect the aggressively exploratory character of the region’s leading purveyor of progressive, avant-garde theater. Every piece is shot through with energy, intelligence and an imagination that refuses to be constricted by conventional boundaries.

As with any mixtape, not every track works as well as the next. No matter how artistically honest and earnest, some land a whole lot better than others. Doubtless, every audience member will find at least one head-scratcher among the offerings – although likely not the same one as their neighbor.

Exemplary is the show’s title, which quotes a song from a Pink Floyd album plus the Italian word for forcefulness plus the name of a famed beach in Los Angeles where Artistic Director Paul Tei has been living until recently. Tei and company riff on that title as being about creation “under the strain of metamorphosis;” some folks will find it simply opaque.

Like viewing a kaleidoscope while ingesting some illegal substance, Mixtape offers a troubled marriage as if the participants were the anthropomorphic incarnations of the countries of England and Scotland. Or there’s another couple whose disagreement escalates into slapstick but bloody violence.

But this opener to Mad Cat’s 14th season has two major virtues. The first is that despite that this is the creation of 16 playwrights and filmmakers, four stage directors, six actors on stage and several more on film, five designers and a host of support staff, despite that multiplicity of voices, Paul Tei has merged them into a single vibe that makes these disparate works seem like they belong together.

The second virtue that distinguishes this from similar undertakings is the assuredness in its delivery by its troupe of actors. Some of the region’s best, underappreciated and underused talents deliver it all with every shred of skill they have and without even a smidge of tentativeness or (a frequent failing in such pointedly anarchic ventures) without a hint of sloppiness. Even if the audience may be a little lost at times (or frequently), the cast and the directors are so specific, so in the moment that they convince you that they know what they are doing and what they mean.

The first Mixtape had no cohesive theme or through line. This time, Tei has tried to wrap the evening inside a narrative of interludes about a zoned out guy (Reyna) living in a storage shed in Miami Shores who is fighting city hall. But this could have been disposed without doing any damage. There are also passing references to Pink Floyd threaded throughout such as calling the storage shed guy Syd Barrett after Pink Floyd’s linchpin member.

One of the most intriguing pieces is Unearthed that actress Deborah L. Sherman wrote for the 24-Hour Theatre Project last fall. Directed here and then by Leland Patton, it takes the audience awhile to realize that they are watching two unrelated sets of siblings attending a death watch for their separate mothers. It’s a tough piece for the actors Hart, Schmidt, Kimble and Davidson who must echo each other and interweave interconnected dialogue like a choral piece. But the illustration of a universal experience is quite affecting once you catch on to what’s happening.

Another especially affecting playlet is Nadie by Farr and also directed by Patton. The drama of a police officer (Kimble) and a street kid (Davidson) resonates with the controversial and divisive tasering by police that killed an acclaimed graffiti artist/outlaw tagger. Without assigning blame, it reveals the inner thoughts of these two people on a tragic collision course.

Most of the films were arty mood pieces that were not as accessible as the plays. The notable exceptions were deliciously satirical television political ads for two candidates for Miami Shores Ombudsman: Mad Cat vet Erik Fabregat and real life politico Ralph de la Portilla who not only acted in the pieces but created them with fellow Wet Socks Ensemble member Ted Chambers. With a broad grin, the pieces lampoon the manipulative wrap-yourself-in-the-flag ads that have utter contempt for the intelligence of the electorate.

Some of the other entries:

Mortal Immobile, written and directed by Tei, shows Syd Barrett’s father (a wonderfully manic Levine), as a wigged out nutjob who harangues subway riders with political diatribes and searches for a job while imagining a film crew is documenting his life.

Blind?, written by Elena Maria Garcia and directed by Tei, is an unsettling look at the willingness of the populace to be led by controlling bureaucracies disingenuously claiming to want to be guided by the public. As with many of the pieces such as Unearthed, Garcia and Tei maddeningly do not lift a finger to help the audience understand what the heck is going on for several minutes, but once the audience does catch up, many are intrigued by the ideas and their execution.

The Scottish Play, written and directed by Reyna, sounds like a ludicrous premise depicting a conventional break-up of a couple with a teenaged daughter as their pawn. But it is viewed as if the participants are Scotland (Schmidt with a flawless and hilarious accent), England (dead perfect Levine) and their daughter Oil as in the natural resource (Farr). The dialogue has some cute jokes, but Reyna has gotten his actors to play this apt representation of a real geopolitical dilemma with total commitment, making it both funny as well as a commentary on how international relations are only a reflection of human relations.

Wish You Were Here, written and directed by Tei, is a much clearer development of a gonzo farce he wrote for the 24-Hour Theatre Project, Smile As the Hearse Goes By, that portrays vapid pop singers on their honeymoon who run afoul of soul sucking demons in the swamps of Louisiana.

Other works include House Show, a play by Andres Rey Solorzano; Relationship, the film by Molly Gandour, Tavet Gillson and Kai Beverly-Whittemore about the bloodily combative couple; Any Color You Like, a film by Tei; Enemy At Home, a play by Farr; Super Satan Hot Licks, a film by the Wet Socks Ensemble; The Last Audition, a film by Matt Corey and George Schiavone; Mainline Florida, a film by Tei, Karelle Levy and Michael Landsberg; and The Rapture, a play by Kristina Wong (author of Mad Cat’s Cat Lady) which juxtaposes a burned out Kardashian kind of celebrity (Farr) and Jesus Christ (Davidson), both taking to the cyberwaves to pitch their surprisingly similar messages.

Production wise, the costumes by Karelle Levy have a unifying striped theme like a post-apocalyptic collection of hoodies with a Mideastern flavor. The lighting by Melissa Santiago Keenan is unusually fluid but very often dim when it didn’t need to be. The strongest design element is Matt Corey’s soundscapes from the musical accompaniment (with Darin Gray from the band On Fillmore) to the sound effects to the background of electronic clicks, whirrs and buzzes.