Off-Beat ‘Love And Human Remains’ Fails In Its Ambition 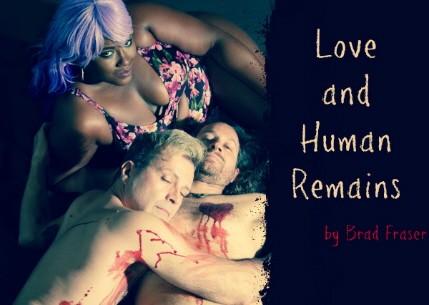 One tragedy being a risk-taking theater artist is that having the courage to pursue an imaginative vision is no guarantee that you can make it work on stage every time out.

Infinite Abyss has reveled for years in its idiosyncratic noirish vision that examines the dark side of human nature and relationships with a vibe that is edgier than a bloody carving knife.

But while this troupe has the nerve and resolve to tackle Brad Fraser’s abysmal script for Love and Human Remains, they simply cannot force this intentionally bizarre journey rife with explicit sex, nudity, blood and emotional violence to seem like anything but a ham-handed amateurish mess.

There is likely some overarching theme to this madness about seven young adults trying to find love while a serial killer stalks their city, but it was lost in this production. Amazon describes the script for sale as “A compelling study of young adults groping for meaning in a senseless world.” Spoiler alert: They don’t find it. Or at least we don’t.

The play opens with a dissolute hooker (Daryl Patrice) dressed in a little girl outfit who spins gory urban myth ghost stories and sings (with the wrong tune, by the way) “Lavender Blue, Dilly Dilly” issued in an ominous tone meant to unnerve.

We meet Candy (Erynn Dalton), a heterosexual book reviewer trying to find the perfect lover. Her roommate and former lover is the homosexual failed actor turned waiter David (Anton Simon) who has a snappy retort for every straight line he’s fed (“So you’re gay?” / “Not professionally.”) and who now believes true love is a false fantasy. Dropping in regularly is David’s best friend Bernie (Dominick J. Daniel) who has domestic issues at home and obviously harbors far deeper problems than his alcoholic pub binges.  Some murky death in their shared past binds and divides the three.

With the exception of Dalton who makes her character somewhat credible, the cast recited their lines most of the night with stilted portentousness like they were in a high school production of The Rocky Horror Show without the laughs.

The play directed by Dalton with Daniel’s help may have meant to be part psychological thriller, part horror flick lampoon, part Grand Guignol, part black comedy and partly a moody atmospheric contemplation of relationships in the 1990s, but it simply seemed clumsily schizophrenic.

The script was written by Fraser in 1989 as Unidentified Human Remains and the True Nature of Love. First produced in Fraser’s native Canada, the cult favorite (perhaps with cults) went to Chicago, had an off-Broadway production, several regional mountings and was made into an indie film in 1993 with the Love and Human Remains title. Infinite Abyss seemed to be using a screenplay because the structure jumped around as if Fraser was a film editor with ADHD, notably some crosscut very short scenes. Indeed, the nuances that exist would land far better in cinematic close-ups, even though Infinite Abyss’ venue is quite intimate.

Another crippling problem is the inept lighting. Island City Stage operates effectively in the same space with the same equipment. But this… Among a half-dozen missteps, people on stage often speak while not illuminated at all. Others are seen in unsubtle chiaroscuro light and dark, but with their features often in shadow which works against the audience sussing out what’s going on. You never know where you are supposed to look. Doubtless, the choices were intentional attempts at creating a theatrical mood, but they simply do not work.

Infinite Abyss genuinely deserves admiring applause just for attempting this piece, but whatever they saw in it is not what they have succeeded in putting on stage for the audience to share.