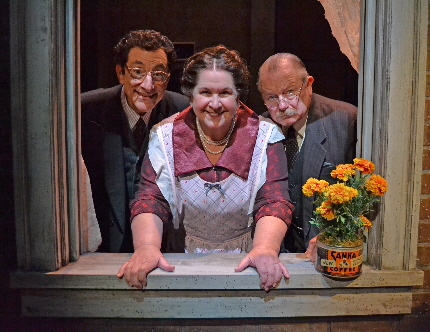 David Kwiat, Elizabeth Dimon and Rob Donohoe peer out at the TV audience in a recreation of The Goldbergs in GableStage-Palm Beach Dramaworks’ world premiere of Ordinary Americans

Before I Love Lucy, before All in the Family, way before Modern Family and even before the term sitcom became a ubiquitous part of TV, there was The Goldbergs, a comedy about a family of immigrants that dominated television when it aired from 1949 to 1956 on the young network CBS.

Behind The Goldbergs’ success was actress and writer Gertrude Berg whose role as a broadcast legend and her battle against the blacklist during the 1950s gets a persuasive, heartfelt look in the world premiere of Joseph McDonough’s Ordinary Americans now at GableStage through Feb. 16.

A co-production with Palm Beach Dramaworks, Ordinary Americans had its launch last month at that theater before moving, with a few modifications, to Coral Gables. Florida Theater on Stage editor and chief critic William Hirschman reviewed the Dramaworks production. (I did not see that production and may occasionally quote from Hirschman’s review when warranted).

Ordinary Americans was spearheaded by Dramaworks producing artistic director William Hayes and McDonough. They then nurtured the script for two and a half years in readings and workshops. The result is a solid story that occasionally dips into melodrama but captures the spirit and struggles of Gertrude Berg and is elevated by a first-class cast.

Directed by Hayes, Ordinary Americans’ top-notch class is led by the superb Elizabeth Dimon who gives an emotionally deep performance as Gertrude Berg, the actress, creator, producer and writer of The Goldbergs. Dimon, who first suggested the work, turns on a pin as she plays TV’s maternal Molly Goldberg, whose naiveté, optimism, wit and wisdom guided the Goldberg family. While she allows her husband Jake to rant and rave and think he is the head of household, Molly’s calmness makes her both the leader at home and in the neighborhood. Her calling “Yoo hoo” to her neighbor and frequent malapropisms add to Molly’s charm.

That was Gertrude Berg’s onscreen persona.

Off stage was a different matter.

While sharing many personality traits with her fictional creation, Gertrude was a shrewd businesswoman, a sophisticated artist who knew her worth to her fans, her co-workers and the burgeoning network. She makes Molly so endearing that when she incorporates a commercial for Sanka, the show’s sponsor, into the plot it’s as if your mom is tucking you in bed at night; no wonder Sanka’s sales went up 57 percent.

Gertrude also is well aware that the Goldbergs were the first time that many Americans outside of New York would have any encounter with a Jewish person. She wanted to show this family of Jewish immigrants as ordinary Americans.

For three years, The Goldbergs was the highest ranked TV show, airing at 9 p.m. Mondays. Gertrude won the first Emmy for best actress. Her scripts mixed the homey with the profound, tackling such mundane crisis as needing an extra chicken to serve a relative to more serious such as a dispute with a landlord to the somber such as the fallout of Kristallnacht in their neighborhood.

When Philip is cited in the Red Channels pamphlet as a Communist because of his outspoken union activism, she is given a choice by the network head — fire him or the show will be canceled. She refuses to fire him, arguing that he is not a Communist and is essential to the show. The Goldbergs was CBS’ biggest money maker, responsible for increasing its sponsor’s revenues; it is too successful to cancel, she believed. She loses her fight and her series is canceled. The Red Scare and McCarthyism are too powerful. In one of his most effective scenes as the head of CBS, Wahl argues that “Fear talks louder than money. Fear screams.”

As Hirschman wrote, “She tirelessly goes from corporate door to door seeking support. Abasing herself, she even ends up begging the powerful but unresponsive Cardinal Spellman. By the time McCarthyism is fading, her kind of warm ethnic comedy has given way to the generic I Love Lucy.”

Hayes assembled a near-perfect cast. Dimon, one of South Florida’s best actresses, is outstanding in each scene, whether the jolly Molly, the steel-edged Gertrude dealing with network, advertising executives and Cardinal Spellman, and the devastated Gertrude when she realizes she has been defeated. The scenes with her co-stars illustrate Gertrude’s compassion and her loyalty to each — all of which show on Dimon’s face. Gertrude truly felt her cast were her family and she did not give up on them even when the series ended.

Character actor Kwiat again proves his mettle as he deals not only with his reputation and the end of his career but also the overwhelming responsibility of the expensive mental health care his son requires. Donohue’s cheerful Eliz turns into the unmovable and bigoted Cardinal Spellman. Wahl is a chameleon of an actor, who easily moves around his five roles. The always reliable Gardner is the energetic keeper of Gertrude’s life, from her schedule to her business affairs, and also doubles as one of her co-stars.

McDonough’s script works well for the most part but any new work needs tweaking as the production process continues. The scenes of the TV episodes give a much-needed glimpse of why the show was so popular and why audiences — no matter their background — related to Molly. But the wall of voices that surround Gertrude as she visits potential sponsors and Philip during his testimony dip into melodrama.

The production was moved from Dramaworks almost lock, stock and barrel, and works well on GableStage’s more intimate space. Gardner effectively takes over the role that Margery Lowe played at Dramaworks. Michael Amico’s fine set depicting a grey broadcast studio, a diner, and executive offices had to be modified a bit to translate from Dramaworks’ larger stage to GableStage’s smaller venue. Brian O’Keefe’s period costumes capture the era and the characters’ personalities.

It’s been more than 60 years since McCarthy, Roy Cohn and the Red Scare seeped into the American conscious and upended lives with hate and lies. But once again, history is repeating itself with ordinary Americans caught up in the aftermath.

To read our review of the Dramaworks’ production, click here.

To read a feature on the making of the piece, click here.