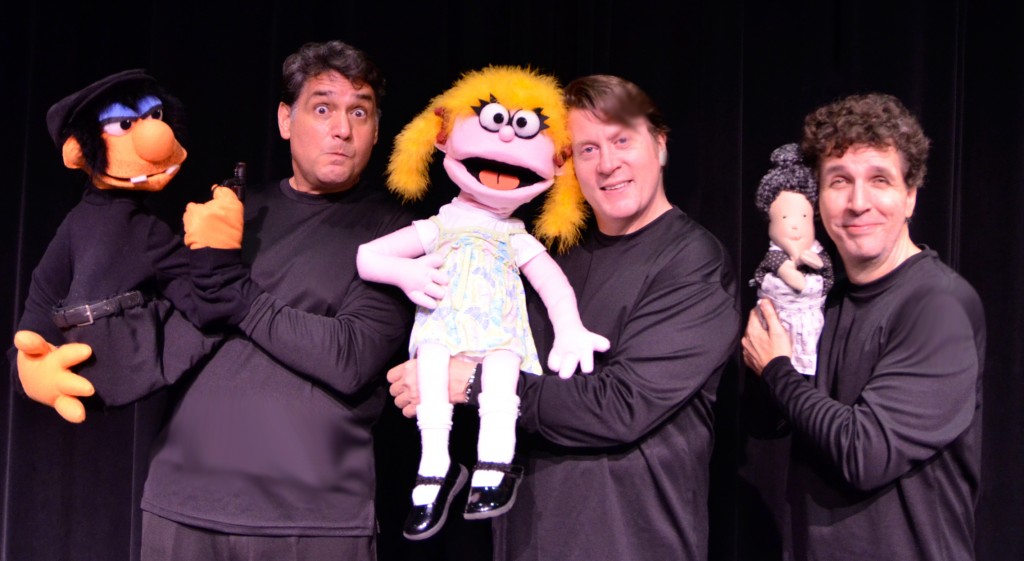 Women of Florida, please: Do not under any circumstances attend the world premiere musical comedy Real Men Sing Show Tunes…and play with puppets lazing through the summer at Actors’ Playhouse.

The writers have violated the double secret probation pledge that we men take in puberty never to reveal the deepest, darkest secrets of our sex, namely life-long confusion, anxiety and fear. They’re the same kind of secrets we know you women all pledge not to reveal, like the one that you really can read our minds.

Paul Louis and Nick Santa Maria, the authors of the words, music and book for this revue, are currently awaiting prosecution by the Covert Masculine Tribunal for lampooning such confidential information as the rules for multiple men standing at a rack of urinals, memorialized in their song, “Look Straight Ahead.”

Or making fun of our thinking process such as the rationalizations for bringing the family to a dinner on the town – at Hooters—in the song that explains it’s “All About the Wings.”

Real Men is a goofy, spoofy hoot that may have seemed all the funnier because, in full disclosure, I am a real man who regularly sings show tunes in the car and would play with puppets if I had any.
Actors’ Playhouse has filled many of its summer slots with similar frothy revues of skits and songs satirizing yet honoring the familiar verities of marriage, women, families, etc., etc. Each has had solid moments, but the quality of the individual numbers always has varied more wildly than Saturday Night Live.

Not so with this one. Developed in readings over a year by Louis and Santa Maria with director David Arisco, Real Men is light, bubbly summer fare, but it has a polish and a consistency that its forebears haven’t had. Yes, it runs about 10 minutes too long, but even the weaker material that could be easily sliced away is still stronger than its competitors.

The production also benefits that the numbers are performed by the authors and local stalwart Stephen G. Anthony, all of whom have highly-developed singing and acting chops that smoothly switch from loopy to introspective when the numbers turn contemplative.

Like the other revues, there’s a flimsy framing devices: Anthony goes to a psychiatrist, worried that his manhood is eroding under the pressures of family, marriage and work. Louis the shrink whips out a girl puppet for Anthony to unburden himself to (it almost makes sense in context) and she hands him the shrink’s self-help book to follow as the revue ensues.

The tunes are generally bouncy and the lyrics wittily observant about male foibles. Since men never lose their adolescent obsession with sex, much of the show has a decidedly blue tinge and a bit of well-placed locker room language. But there are some touching songs, such as “A Real Man” in which the trio reminisce about their fathers.

A consistently funny running bit has the men garbed in choir robes intoning readings from “The Book of More Men,” one liners about what’s great about being a man, such as “If someone forgets to invite you to a party, you can still be their friend.”

The skits, often the weakest parts of any revue, are pretty sturdy. One of the funniest features Anthony trying to hold forth with some guys in a bar about manly subjects he knows nothing about such as the baseball season, new car models and appliance repair. We’ve all been there.

Arisco and company have a wonderful quirky visual sense. Prop mistress Jodi Dellaventura provides a hilarious procession of items for Santa Maria to find in the old toy box of an adult son who has moved away in “That’s My Boy.”

And then there’s the puppets. Louis and Santa Maria have been involved for years in puppetry through professional children’s theater. As a result, the show is graced with a score of creatures ranging from a tiny finger figure to a 10-foot tall Grim Reaper. As with Avenue Q, the Sesame Street-like puppets designed by Louis and built by Louis and costume designer Ellis Tillman are often both furry and filthy such as three buxom Hooters waitresses.

A tip of the hat is due musical director, arranger and pianist Manny Schvartzman, who has helmed several shows recently for Slow Burn Theatre Company in Boca Raton. Also due credit (and barely mentioned in the program) is the busy backstage crew and assistant puppeteers Gaby Macias, Kris Cardenas and Andrew Arisco.

Anthony, of course, has been a local fixture for years, excelling in roles like this one where his good looks and warm baritone are undercut by a look in his eyes betraying that the character knows his failings all too well.

Louis and Santa Maria have been laboring around South Florida theaters and comedy clubs for years, accumulating significant credits (several on the national level) but not creating a high profile among even regular theatergoers. Caldwell Theatre patrons may remember Santa Maria from God of Carnage; Louis has done several shows for Actors Playhouse but none in recent years. But both instantly command the stage with a level of skill and an assured manner that ought to ensure they are regularly employed down here.

That may be problematic: Real Men is another entry in the Menopause the Musical sweepstakes – the search for a low-budget easily-transportable middlebrow mass entertainment rooted in universally-recognized social prototypes. Because of its quality, Real Men has a solid shot at the Holy Grail and the duo may well be on the road with it a long time.

To see videos of rehearsal and promotional clips,
Click here
And here