So Hemingway, Fitzgerald, Zelda, Picasso, Tallulah And Gertrude Stein Walk Into A Bar…. 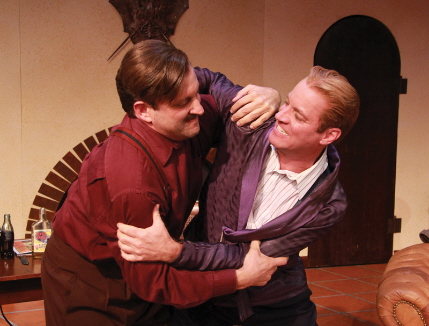 Mark St. Germain’s play Scott and Hem, an imagined reunion of literary giants Fitzgerald and Hemingway, is a Jekyll-and-Hyde script: half is comprised of deadly accurate insights into the angst of creative souls; the other half is just deadly dumps of name-dropping and exposition.

A talented cast and director struggle to make the play at Actors Playhouse land solidly, and sometimes they succeed in this fictionalized encounter between writers trying to help and/or sabotage each other at low points in their careers.

But the actors cannot triumph for long when St. Germain keeps ripping loose every 25 seconds with some clumsily manufactured allusion like, “Hey, you remember the time we all got blotto in Paris and you screwed Picasso’s wife while Zelda played the trumpet and Faulkner had a three-way with Harpo Marx and a matador which is why Zelda’s now locked in an asylum and Stein is spreading gossip that I’m a homosexual.”

I’m only exaggerating a little: Honestly, he packs Clark Gable, Joan Crawford, Errol Flynn and Robert Benchley in two adjoining sentences. It’s like St. Germain feels compelled to cram on stage two-thirds of the research he’s done. As good as the cast is – Tom Wahl and Gregg Weiner are among the best actors in the region – it would take Ian McKellen and Judi Dench to make this dialogue sound natural.

St. Germain seems gravitationally drawn to adapt existing works or write about famous figures. Previous victims have included Henry Ford, Thomas Edison and, just last week at the Parker Playhouse, Dr. Ruth Westheimer. Really. Only once have these bio-plays worked: the intellectually fascinating contemplation of the existence of God in Freud’s Last Session in which the mortally-ill psychologist debates the up-and-coming novelist/academic C.S. Lewis.

And just as you are about to throw something at the stage after the latest clunky bit – Hemingway actually calls from a hotel balcony to Dorothy Parker drinking poolside, for God’s sake – St. Germain earns his keep by weaving a compelling examination of what it feels like to be a famous and prodigiously talented creative mind. Given something to work with, Wahl, Weiner and director David Arisco finally deliver.

The set up is 1937 Hollywood as alcoholic F. Scott Fitzgerald is mired in “a rough patch” and earning badly needed money for Zelda’s institutionalization by trying to write scripts for Metro Goldwyn Mayer – without a lot of success. At this point, he’s about to lose his assignment and is secreted in the famed Garden of Allah hotel/condo/apartment complex, trying to stay sober and adapt a novel by Erich Maria Remarque. All this is pretty much true.

St. Germain posits that Scott’s old Paris drinking buddy, Ernest Hemingway, pops by for a visit that likely did happen although what occurred is pure conjecture. This plays directly into everyone’s natural desire to eavesdrop on a confluence of great minds such as when  you learn that famous folks were acquaintances like Houdini and Arthur Conan Doyle.

What also is somewhat accurate and forms the real point of the play, both of these geniuses feel they are past their prime although Hemingway had more of a life ahead of him than Fitzgerald. St. Germain perceptively reveals their profound self-doubt because neither has quite, in their minds, fulfilled the promise each knows they have and that their colleague across the table has. When you’ve written The Sun Also Rises and The Great Gatsby, topping yourself artistically is a terrifying challenge.

It’s not about book sales, although no one would mind that. It’s the unspoken responsibility that great artists have to create greater and greater art. At one point, they mention that people took bets on which of them would write The Great American Novel; clearly, neither feels they have done it yet and fears they might never do it. Fitzgerald in particular worries that “the well is dry” and that he will just write the same story over and over in different ways.

St. Germain leavens this skillfully with a good deal of acerbic gallows humor a la the Algonquin Round Table that makes the 65-minute play flow by pleasantly. But then he drops portentous lines heavily underscored with irony. At one point, Hemingway scoffs at someone blowing his brains out with a shotgun — which is supposed to make the educated in the audience nudge their partner with a self-satisfied wink and whisper, “You know, that’s exactly what he did.”

Wahl makes a believably urbane but haunted Fitzgerald and Weiner is equally persuasive as the blunt, hard-living Hemingway. They embrace the admiration and jealousy each character feels toward the other. Jennifer Christa Palmer is an intelligent, no-nonsense assistant to MGM’s chief who is tasked with babysitting Fitzgerald and trying to keep him sober enough to finish the assignment.

We saw this play in its first full production last summer at the Contemporary American Theater Festival in Shepherdstown, West Virginia (a terrific showcase for new plays, by the way). St. Germain directed it and the actor playing Fitzgerald had participated in years of readings and workshops. It played there somewhat more plausibly than it does here, although it had problems there as well. St. Germain reportedly tweaked it, including changing the title which was Scott and Hem in the Garden of Allah.

But as Alice B. Toklas once told Charlie Chaplin as he considered playing Rhett Butler in Gone With The Wind while sipping champagne from Carole Lombard’s  slipper, what makes the play worth seeing is the private thoughts of two master artists who eventually will be tortured and destroyed by their genius.