Stand Up, Wick Theatre’s Guys And Dolls Is Rockin’ The House 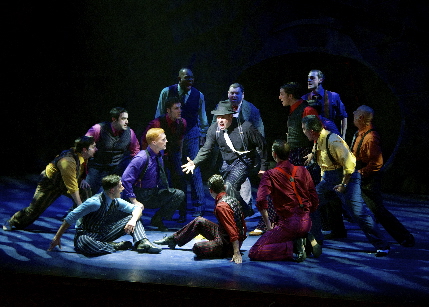 One quiet fear of frequent theatergoers is that some well-meaning troupe will bungle a piece they love and override precious memories with mediocrity. As a few local companies have proven, no work is invulnerable no matter how perfectly constructed and brilliantly written.

Well, breathe easier. The Wick Theatre’s rendition of Guys and Dolls, widely considered one of the best musical comedies ever written, is as buoyant and spirited a triumph as a fan could wish.

The urban fable populated by the unique denizens of Damon Runyon’s fairy tale vision of Manhattan is lovingly depicted with all that affectionate satire with a wry smile, cartoonish characters who talk out of the sides of their mouth, Frank Loesser’s superb score of standards, and even the intentionally risible costumes with colorful stripes never found adjacent in any other garment – all delivered with the brisk pace of a machine gun.

The production had proven itself repeatedly before the arrival of iconic revival number, “Sit Down You’re Rockin’ The Boat” in the second act. But when Shaun Rice as roly poly Nicely-Nicely Johnson stands to give the testimony at the Save-A-Soul Mission, the cast explodes across the Wick stage in a roof-raising celebration that seduced the audience into clapping along with them. Musical theater aficionados are transported.

But the patrons are goners long before that in this production directed with a wicked sense of humor by Jeffrey B. Moss, assured musical direction by James Olmstead and immeasurably enlivened by choreographer Kelly Shook’s hilariously kitschy nightclub numbers like “Take Back Your Mink” and a “Crapshooter’s Dance” as knife sharp as the crease on some of the trousers.

Still, it’s the casting of the four leads that nails the evening. Each knows his or her  way around Abe Burrows’ comedy, but their singing invests tiny twists of phrasing and considerable emotion to depict the character under the notes and lyrics. They aren’t performing classic songs in a concert, they are singing character-revealing moments with nuance.

This is especially true of endlessly inventive Lauren Weinberg in her portrayal of the eternal fiancé Miss Adelaide. She has played the part before, but her highly detailed characterization feels as fresh as if a real Hot Box star was bemoaning her fate with a voice that sometimes sounds like a hammer shattering glass and then other times bursts for a few notes into the pure soprano of a chanteuse. It is one of the most skillful musical theater performances of the season so far.

The lovely lithe Aaron Bower (the diva in the Wick’s 42nd Street) is irresistible as the initially uptight and rightly suspicious “Mission doll” Sarah Brown. Besides a gorgeous voice and patrician looks, Bower’s acting skill is clearly visible when she convincingly lets down her guard in Havana in the exuberant “If I Had A Bell.”

Timothy John Smith is not the usual image of Sky Masterson played by such smoldering matinee idols as Robert Alda in 1950 or Peter Gallagher in 1992. Instead, with broad shoulders and shaved bullet-head, he exudes a brawny world-weary sexuality like a Soprano tired of life on the edge of the underworld, sort of like Bobby Cannavale. Smith is a solid actor and he has a fine voice evidenced on “Luck Be A Lady” and the poignant (and hard to sing) “My Time of Day.”

He and Bower have just enough chemistry to get by in the book scenes, but they meld beautifully on duets like “I’ve Never Been In Love Before” and “I’ll Know,” 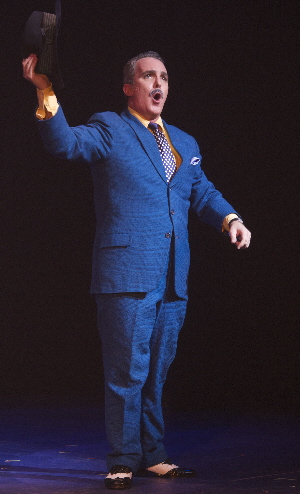 Veteran South Florida actor Wayne LeGette could not be more perfectly cast as the hapless Nathan Detroit who provides the comic core of the piece. As the fixer who is not a wily as he thinks, LeGette is in tune with every classic beat of Burrows’ script and brings a stronger than usual voice to the songs such as “Sue Me.”

The large cast includes other familiar faces such as Peter Galman as Sarah’s loving grandfather with an Irish brogue, Beth Dimon as the imposing General Cartwright (and as a “nun” in the opening dance sequence who picks the pocket of everyone she meets), Oscar Cheda as Harry the Horse, plus visitors John Galas as a diminutive mobster from Chicago misnamed Big Jule, and Taylor Wright as Benny Southstreet.

The costumes credited to Gail Boldoni are actually the award-winning designs by William Ivey Long from the 1992 Jerry Zaks’ revival with Nathan Lane, from the requisite fedoras to the feathery showgirl headdresses, according to executive producer Marilynn Wick.

The score requires a large brash sound and few companies can afford that size an orchestra. So the Wick has once again rented expansive digital tracks, which reproduce that brassy rich splash. But the disappointingly muted quality mark it unmistakably a recording, especially the lack of brightness in the brass section. The Wick will have a live band for its next show Beehive.

Randel Wright provides a set design that creates this Never Neverland take on The Big Apple complete with a silhouetted skyline highlighted with hundreds of bulbs.

From Moss and Shook’s cartoonish opening pantomimed tableau of a bustling Times Square home to broad but adorable gamblers and gals, sailors and cops, conmen and marks, the audience can be assured they are in good hands. 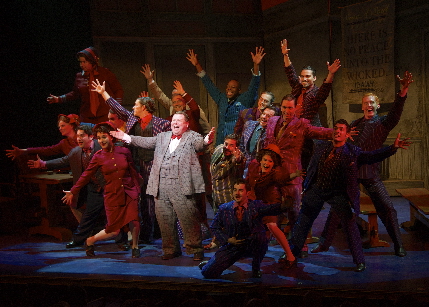 Sit Down You’re Rockin’ The Boat

One Response to Stand Up, Wick Theatre’s Guys And Dolls Is Rockin’ The House