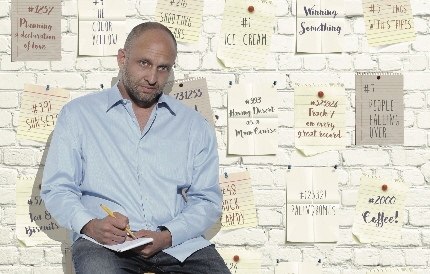 The premise of Every Brilliant Thing might fool you into thinking that it’s kin to a Hallmark card or a “very special” Lifetime Movie of the Week: a seven-year-old boy tries to ease the pain of his suicidal mother and his own anxiety by making a list of “brilliant” things and leaving them for his mother to find.

His list aimed at topping out at 1,000 is composed of positive life-affirming items and experiences, such as ice cream and staying up past your bedtime.

He continues adding to The List throughout his life and throughout his mother’s repeated suicide attempts, a counter-balancing technique for dealing with his own resulting depression.

Some are serious, some are lighthearted: Nina Simone’s voice, or Having dessert as a main course.

But British playwright Duncan Macmillan has profound themes hiding just under the play’s wry and warm exterior: highlighting the bounteous cornucopia of aspects of life that can be beautiful and sustaining, as well as the lasting ripples of damage that a loved one’s depression can wreak on an entire family.

Before you fear going into insulin shock, know that this quirky cute little play is a genuinely entertaining effort due to the genial persona of the sole performer, Gregg Weiner, the direction by Stuart Meltzer and Macmillan’s drolly amusing script.

The nature of our hero’s entries changes, of course. As a teenager dealing with his mother’s second suicidal attempt, he writes, “The even-numbered Star Trek movies” and “Laughing so hard you shoot milk out your nose.” When he goes off to college, he focuses on the list as an escape with such entries as “Knowing to jangle keys at a wildlife park if you want the otters to come out.”

He falls in love with a kindred soul and, inspired by the joys of their relationship, he continues compiling way past 1,000 items. But as he works his way up through hundreds of thousands of items, the depression likely rooted in his mother’s hopelessness eats into his life. His wife leaves, hoping to return if he can ever recover. He gives up on The List reaching one million items. And his mother finally succeeds in killing herself.

Severely troubled and depressed himself, he finds some succoring encouragement in the overwhelming accumulation of the list which he resurrects.

Besides copious humor shot through the play, the evening’s light and winning zeitgeist remains somewhat unique for South Florida because of one delightful peculiarity: Macmillan and the first actor to perform the work, comedian Jonny Donohoe, designed it to be audience interactive in extremis. Each performance involves nearly half the audience individually — although do not fear, only a handful of people will end up in the spotlit playing area.

For a half-hour before the show starts, Weiner roams the four risers surrounding the nearly bare well-lit stage. He enlists scores of audience members by giving them a piece of paper with a number and the words of one of the items on The List. He tells them he will ask them to say the words aloud when he calls out their number. This may seem too cute for words, but it actually works smoothly and forces the audience to pay attention.

Those without a paper are not necessarily dodging the bullet: During the play, he drafts audience members to portray his father, a veterinarian, a school counselor and his fiancée/wife. Those interactions are constructed so that the “volunteers” really only respond logically to Weiner’s questions and comments — no lines need be memorized. But the script prescribes that adjust and adapt to volunteers who use their imagination to expand the dialogue a bit. On opening night, the woman drafted to play the counselor dove into a protracted back and forth with Weiner that was downright delightful because neither she nor the audience nor Weiner knew where it was going.

All of this gives the evening a frisson of unpredictability that is engaging and amps up the witty quality of the 70 minutes which would otherwise be a monologue.

Obviously, this requires a solo performer who has a storyteller’s mesmerizing quality as well as a veteran actor’s improvisational skills. Skimming the script exposes just how crucial the latter skill becomes because the potential vagaries of the audience require the actor to indulge them, but keep the play narrative moving forward as planned.

Fortunately, the multi-award winning Weiner (recently the tortured writer in If I Forget at GableStage) is blessed with an abundance of both qualities. One of his strengths is how he is an unshakably pleasant and even-tempered companion enjoying the evening as much as his audience, yet always subtly communicating the underlying angst. His narrator is the kind of fella you want to go out and have a beer with, but whom you know is nursing some secret pain.

Every Brilliant Thing from Zoetic Stage as part of the Theater Up Close series performs through March 3 in the Carnival Studio Theater at the Arsht Center’s Ziff Ballet Opera House, 1300 Biscayne Boulevard, Miami. Performances are at 7:30 p.m. Wednesday-Saturday, 3 p.m. Saturday; 4 p.m. Sunday. Tickets are $50-55. Running time is 70 minutes with no intermission. (305) 949-6722 or www.arshtcenter.org.