Wick Theatre Proves Itself With Solid Soaring Sound Of Music 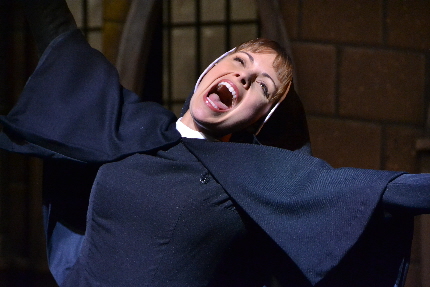 To answer the question that most folks are wondering after The Wick Theatre’s bow Friday night: Yes, there is a credible, substantial new player in town.

The inaugural production of The Sound of Music has the feel of a fully-realized no-excuses production because it is, indeed, a polished, three-dimensional work of theater. It bodes well for the future of a crowd-pleasing mainstream theater on the site of the former Caldwell Theatre Company in Boca Raton.

Some may carp (and many in the opening night audience did) that the region didn’t need yet another Sound of Music so soon after the Maltz Jupiter Theatre’s fine mounting in 2011.

But this production under Michael Ursua’s direction succeeded at being unabashedly sweet and sentimental without being cloying or endangering diabetics in the audience. Ursua created the rare perception that when a character breaks into song, it feels as organic as such moments are capable of in the artificial construct of musical theater. Most of the time, actors did not stop the dramatic flow to deliver a venerable number that they and the entire audience knew by heart.

The three-dimensional feel came from most everyone playing the truth of the situation rather than knowingly performing a classic bled of its emotional honesty by a half-century of ham-handed productions and a bloodless film version.

Ursua and his cast applied subtle shadings that enrich the production. Liesl, still grieving for her mother, hangs back as Maria enchants the other children with “Do-Re-Mi.” Max, the ultra-pragmatic agent, is emceeing the penultimate festival where the family is performing. Faced with the reality of his compromises, his voice quavers when the stormtroopers arrive to escort the Captain to serve the Nazis.

This is still The Sound of Music and The Wick still balks at delving deeply into Hammerstein’s multi-faceted world view as the British have in such reimaginings as their Oklahoma in 1998 and Carousel in 1992. But this is as satisfying a production as you could reasonably hope for.

The Wick has hired a mostly solid cast with the two Equity leads from out-of-town and most of the rest drawn from the capable ranks of local talent. All but one have strong, expressive voices and all but one are convincing actors. No one winks at the audience or shies from the sincerity that Oscar Hammerstein forged from his optimism about humanity prevailing over darkness in many of his shows: Billy Bigelow is a philandering wife beater. Lt. Cable volunteers for a suicide mission because he can’t deal with his own prejudice, and the Nazis are taking over the world. Raindrops on roses, indeed.

If casting is half of a production’s success, Usua and company couldn’t have fared better with two of their three key choices.

Krista Severeid has played Maria at least twice before which may erase her anxiety in learning the raw material. But she has courageously imbued this Maria with a believable sense of goodness and decency that forces you to park your 21st Century cynicism in the lobby.

Coming across a bit like Sutton Foster with bangs, Severeid’s misfit postulant exuded childlike exuberance when she removed her folded arms from under her habit and sent them flying through the air to express her delight. It’s a given that she has a captivating, welcoming voice, but even her sibilant “S” made her Maria all the more adorable when singing “My Favorite Things.”

When she matured under the encroaching specter of fascism, the invasion of her homeland and her family’s forced exile, Severeid’s Maria credibly maintained an almost Anne Frank positivity.

But we’ve been holding out on the real home run of the evening. Lourelene Snedeker as the Mother Abbess simply embodies everything right about musical theater acting. She is as persuasively believable as this beatific yet worldly wise nun as she was the Weimar chanteuse with a curdled soul in Arts Garage’s Cabaret Verboten in 2012.

It isn’t just that she has a transcendent voice. She has said she’s a mezzo-soprano, but she nails the high notes written for a different range. No, start with how she invests a character with vibrance and passion while she sings. From the opening “Preludium” chorale, her face beams out of the wimple, someone transported with the joy that comes from the certain knowledge of the existence of a loving God.
Then listen to her phrasing as she fitfully joins in with Maria as she recalls the words to a song from both their childhoods, “My Favorite Things.”

Sidebar: I checked my watch near the end of the first act to report how long the show lasts. I poised my pen to write down the time when the act actually ended. And then Snedeker sang “Climb Ev’ry Mountain.” It was several minutes into intermission before I realized that her bravura performance had so completely eradicated the passage of time that I forgot to record when the lights came up.

As for the rest of the cast, Tony Lawson, Severeid’s real life husband, was perfectly serviceable as the martinet-who-melts, Captain von Trapp. His full baritone did justice to Rodgers’ melodies. He, too, was willing to let his voice catch with emotion as he sang under stress, such as “Edelweiss” or when he joined in with the children for title song, a scene that must move even the stoniest heart. If he wasn’t as convincing as Maria, to be fair, has anyone ever heard of any actor mastering the darkness-into-light aspect of this part?

In most productions, the weakest element is the children. Everyone silently makes allowances because, well, they’re kids. This septet doesn’t have to worry about that too much. They don’t come across as promising students on loan from some theater’s summer camp; they are just the characters. The roster includes UCF grad Katie Hensley as a lovely Liesel (who, per tradition, hasn’t seen her 16-going-on-17 birthday for quite some time) plus Avrumie Spindel, Megan Sell, Emily Elizabeth Kirschner, Alexander Lawless, Savannah Lawless and Alexa Lasanta who may be the smallest person ever to play Gretl.

Kudos, too, for Mia Matthews’ willowy Elsa, an elegant aristocrat with a head for business. Her elegant mien, sophistication and silver voice made men in the audience wonder what was wrong with the Captain for not marrying her.

Jeffrey Bruce did not have as strong a voice as Max and he was saddled with a cartoonish Oscar Levant brand of comic relief. But he persuasively delivered Max’s too-malleable pragmatism as well as the sardonic quips in the script – inexplicably spineless and haplessly likeable at the same time.

Joshua S. Roth, as Leisl’s love interest and nascent Nazi, gave the least compelling performance. He looks like Tom Hulce in the opening scenes of Animal House and never inhabited a real person on stage. But that’s the problem with the part. Seriously, name one actor in the role who ever has. Okay, maybe Johnny Depp in the Miramar High School production, but otherwise….

The Wick has another 12 actors in the cast, all with fine voices, notably Renee Elizabeth Turner as the kindly Sister Margaretta and Ann Marie Olson as the stern Sister Berthe (who has a nice cameo in the festival scene dressed in a low-cut slinky number that Sister Berthe only dreams of in her cell).

Also in the aural department, Ursua, who is executive director and resident musical director for The Wick, led his cast in flawless performances of the complex choral numbers.

Having 25 people in the cast is indicative of the richness of the production values – with one exception – that go a long ways towards silently communicating that The Wick wants to mount sumptuous productions – as well as the idea that they plan to be here a while.

Obviously, since costumes are Wick’s claim to fame, the wardrobe is dead on. But designer Robin Buerger hasn’t simply pulled and altered costumes from a recent revival. Instead, she has selected costumes from multiple productions and had others built just for this production. They encompass the embroidered Alpine folk outfits to a gorgeous crimson gown for Elsa to charmingly homespun simple playclothes that Maria sews from discarded curtains. Even the stagehands who moved scenery were dressed in butler’s livery.

The set design and construction by Tom Hansen of Tampa was also lovely, from the mountaintop backdrop for Maria’s entrance to the marbled veranda of the von Trapp estate to the ancient arches of the abbey cloister. It may seem anal to mention it, but these sets have some of the most verisimilitude scenic painting we’ve seen in quite a while. It’s helped out by the lighting of Tom Shorrock, a former Caldwell hand. The only improvement would be for the spotlight to come up a bit more subtly when someone has a big solo; it often felt like the searchlights at a prison being snapped on to seek out an escapee.

The Wick has installed new equipment which paid off in Gerald Michaels’ crystalline sound. The sound crew was a little slow on the draw opening night balancing the levels of the music with the voices, and some microphones faded up a tad late sometimes, but that will solve itself after another couple of performances.

And then there is the music. To keep the budget within limits, the theater has opted for a digital orchestra rather than a live band.  We’ve waxed frequently about the undeniable virtue of live music while acknowledging that some shows, like this one, need a full sound that many theaters can no longer afford. So at least acknowledge that with The Wick’s new sound system, the luxuriant full-throated tracks provided by The M Pit LLC reduce the feel of hearing canned music.

The theater’s bow was greeted with a nearly full house that included Florida theater icon Jan McArt, actress Loretta Swit who will star in The Wick’s 42nd Street in January, and, swathed in a gold sequin wrap and turban, the 101-year-old Countess de Hoernle who was a crucial donor and frequent patron of the Caldwell.

Marilyn Wick, producer and founder, forewent an opening curtain speech, but appeared at the end of the curtain calls. Jazzed with emotion, Wick told the audience, “I’ve climbed a lot of mountains, but now I guess I’m at the top.”

Schadenfreude and jealousy often mixes with the comradeship and collegiality that characterize a theatrical community. Wick herself, a novice in theater production, has engendered her share of relationships characterized by love, hate and love/hate. But Friday night, the crowd was united in celebrating the opening of a major big-budget theater to offset the gloom of losing five companies in recent years — even if some hoped for more than the decidedly mainstream warhorses populating Wick’s schedule.

Beyond that, there is something admirable in being precisely what you want to be, in achieving exactly what you wanted to achieve. No question, this production of The Sound of Music did that.

For previous stories about The Wick theatre, click here  and here