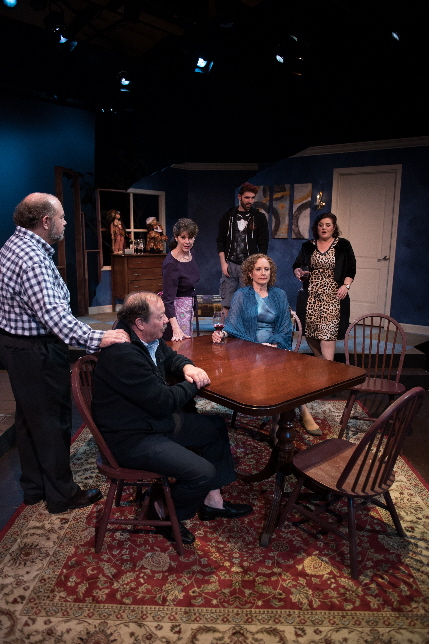 If Arthur Miller were also a doctor on the side, he might have written a play like Unlikely Heroes. A family drama full of long-harbored resentments and new ones stemming from intimate secrets revealed, this world premiere on view at Boca Raton’s Mizner Park Cultural Arts Center also hinges on a potentially fatal condition that will require an organ donation. Oy, and you think you have problems?

Written by Charles Gluck, a retired gastroenterologist and occasional stand-up comic, Unlikely Heroes has an air of authenticity when it comes to medical matters, plenty of solid one-liners and – autobiographical or not – a believable depiction of family dysfunction.

Area favorite Avi Hoffman, recently acclaimed in New York for playing Willy Loman in a Yiddish production of Miller’s Death of a Salesman, both directs Unlikely Heroes and plays the pivotal role of David, a middle-aged garment worker in a business he co-owns with his older brother Leo (Michael H. Small).

In the opening scene, Leo berates his brother for some wasteful decisions, but is preoccupied with medical tests that loom before him. Leo soon learns the worst, that his kidney has failed and he needs a transplant quickly. At a tense Thanksgiving dinner, childless Leo asks David and his son Bradley (Robert Johnston), as well their flaky vegan sister Gail (Kim Ostrenko), to submit to blood tests to determine their possible organ compatibility.

David’s wife Mindy (Margot Moreland) objects loudly and bitterly to the request, which uncovers buried hostilities between the two households. Still, such animosity pales next to the devastation that follows the results of the blood tests.

Playwright Gluck eases his way into the story, with lightly humorous exchanges between characters, underscored by sitcom bouncy music transitions from scene to scene. But when this family goes for the throat, Gluck shows he can switch gears and write confrontations of extreme savagery.

Similarly, Hoffman’s direction seduces us into identifying with these characters, flawed but likeable, then he and his cast manage the problematic mood shift as the play grows increasingly darker. His one false step, though, is the heavy-handed repetition of key phrases of dialogue, projected on the back wall of Michael McClain’s simple, but otherwise effective set.

Hoffman excels at playing downtrodden nebbishes like David and is well matched with Small, who handles Leo’s moments of volcanic anger and deeply felt remorse. As a pair of domineering Jewish wives, Moreland (David’s) and Patti Gardner (Leo’s) are two sides of the same coin, pushing their diffident spouses and dealing with the results of the play’s central reveal.

As Bradley, David’s 27-year-old video game-obsessed son, Johnston has little to do in the early going, but he finishes strongly in a coda scene with Leo. Ostrenko is fine as Gail, but the character is too underwritten to leave much of an impression amid her more colorful, demonstrative relatives.

Unlikely Heroes, however, leaves a distinct and positive impression. A program note by Hoffman suggest that he has been working with Gluck on his plays for the past four years. Presumably there was substantial revision in the development of this script, but the result points to a new writer for the stage worth encouraging and keeping an eye on.