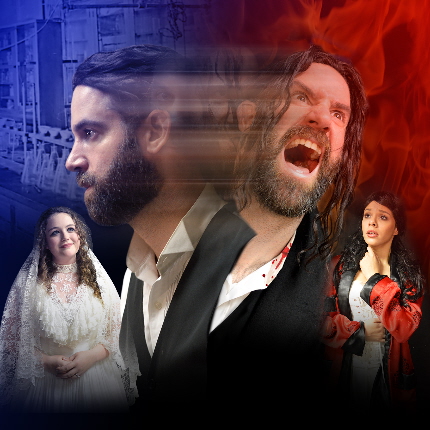 Sometimes, as in the case of Marquee Theater Company’s Jekyll & Hyde, the performances are so overwhelmingly powerful that you simply forget that the basic material isn’t worthy of the artistry on display.

Composer Frank Wildhorn’s pop-infused power ballad-addicted aesthetic divides theater fans more deeply than the current political scene. But there’s no ambivalence in this young company’s enthusiasm coupled with the strong performances of Ben Sandomir in the title roles and, especially Alexandria Lugo as Lucy, the hooker-with-a-heart-of-gold and vocal-chords-of-steel.

However you feel about Wildhorn and his partner-in-crime bookwriter and alleged lyricist Leslie Bricusse (whose last good songs were for Willy Wonka & The Chocolate Factory), let’s underline that this production is worth the ticket, worth filling up gas tank and worth driving out to the edge of the Everglades in Boca Raton to savor Lugo’s radiant performance and glorious voice. Really.

If you wondered whether Lugo’s stunning performance in Marquee’s Aida last year was a fluke, wonder no more. It’s not just her soaring voice that seems to need no amplification; it’s the pure passion that transfixes her face and flows out of her body. Her Aida was a dignified serene member of exiled royalty whereas her Lucy is a downtrodden but luminous and sexy resident of the underclass. Whenever she sings, her body arcs, her arms stretch wide, her eyes blaze with joy or terror or sadness. Theoretically, director Andrew Shultz should have reined her in a bit in that regard, but it’s Wildhorn and it’s nearly impossible to do anything except work flat out.

The 1990 musical is based on Robert Louis Stevenson’s novel adapted dozens of times because it lies unprotected in the public domain. It explored the idea that human beings harbor both good and evil natures. The altruistic researcher Dr. Henry Jekyll is rebuffed by the Victorian establishment in his quest to chemically separate the two, hopefully allowing us to choose the purer half. Unfortunately, as one friend asks, what happens to the other half? When Jekyll tests the potion on himself, it releases Edward Hyde, a murderous hedonist. This puts a crimp in Jekyll’s plans to marry the uppercrust Emma, but it allows Hyde to pursue the aforementioned Lucy as he merrily kills off all of Jekyll’s enemies.

Sandomir, who was moving in Evening Star’s The Last Five Years, does not have the God-given charisma to overcome the thin script. But he is blessed with an impassioned expressive voice and he invests every molecule of his flesh and blood into his performance. Tall, slender, equipped here with long black hair and a beard, Sandomir exudes the haunted decency of Jekyll and some of Hyde’s menace although Sandomir just can’t quite nail that sense of unbridled feral evil. His transformation to Hyde works reasonably well, primarily by crouching, pulling some tendrils of his hair over his face, snarling and scowling. But Jekyll’s friends who do not recognize Hyde must go to the same optometrist who serves the inner circle of Clark Kent and Superman.

Caitlin Frost has a nice soprano and her Emma has a bit of backbone supporting her beloved Henry come high water and hell. The supporting cast also does what anyone could ask for under the circumstances including Geoffrey Short as the loyal best friend, Peter Librach as Emma’s father and Nathan Mays as the rival Stride.

Shultz and musical director Paul Reekie embrace Wildhorn’s style – paint-blistering arias delivered full frontal to the audience. The tsunami of sound is a plus because it tends to overshadow Bricusse’s lyrics, which are as blunt and mechanical as jackhammer breaking up concrete. Remember when Bricusse did good work with Anthony Newley?

The co-founder of Marquee is Ben Solmor who did strong choreography for Aida and a superb work for the small-scale Songs for a New World. But while his efforts here are serviceable, the tone is all wrong. Instead of communicating chaos, his dancers do standard Broadway chorus line moves in perfect sync such as twirling umbrellas.

The digital tracks are full-blooded and only occasionally overpower the singers. The lighting is evocative, but in an attempt to emphasize the theme of duality, people are singing in the dark who should be visible.

The musical started as a concept album, then bowed in Houston in 1990, toured the country five years later, and opened on Broadway in 1997 with Robert Cuccioli and Wildhorn’s then-wife Linda Eder, followed by a risible turn starring (no kidding) David Hasselhoff, which is on DVD and currently being used to torture inmates at Guantanamo. Another production with a more rock-inflected score toured in 2012-13 including here in South Florida with American Idol’s Constantine Maroulis and Deborah Cox. Having postponed the inevitable for months, it finally moved to Broadway in 2013 and closed after 29 performances, which says everything you need to know.

This one is much better. It only has two more performances left, so catch Ms. Lugo and Mr. Sandomir while you can.