Eighteen Silver Palm Awards honoring theatrical excellence in South Florida during the 2011-2012 season will be presented Dec. 3, as well as two Remy Awards from the South Florida Theatre League.

While the list contains many familiar names like Adler, Arisco and McKeever, it also acknowledges the work of younger artists who work primarily with fledgling companies and in tiny spaces, people like Lindsey Forgey and Mark Della Ventura. 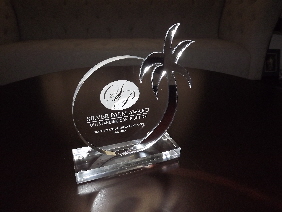 For four years, the Silver Palms have been designed as honors  that play down the competitive aspect that sometimes attaches to the annual Carbonell Awards. It often recognizes a body of work during the year rather than the efforts on just one show.

Silver Palm Awards Chairman Tony Finstrom wrote, “The Silver Palm Awards are presented annually to those who’ve made an outstanding or unique contribution to the South Florida Theatre season…. There are no nominees, no winners or losers, and no limit to the number of citations given in any ‘category,’ though there really are no official categories.” This year, six recipients are prior winners.

The honorees for the season from September 2011 to August 2012 are:

Joseph Adler, producing artistic director at GableStage for his direction of Race, Red, The Motherf**ker With The Hat and Time Stands Still. He previously won for his work in the 2008-2009 season. 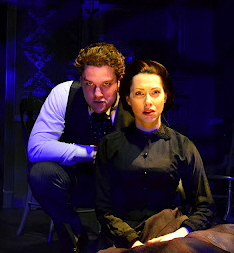 Katherine Amadeo, actress for her performance as the troubled governess in The Turn of the Screw at Naked Stage which she co-founded.

Michael Amico, production manager for his set designs on All My Sons, The Effect of Gamma Rays on Man-in-the-Moon Marigolds, and Master Harold and the Boys at Palm Beach Dramaworks.

David Arisco, artistic director of Actors Playhouse for his direction of the musical Next to Normal and the one-man play Jacob Marley’s Christmas Carol.

Jim Ballard, actor for his performances as the agonized son in All My Sons and the dashing El Gallo in The Fantasticks at Palm Beach Dramaworks and the conflicted husband in Side Effects at Mosaic Theatre.

Ken Clement, actor for his one-man tour-de-force in Jacob Marley’s Christmas Carol, his steadfast husband in Becky’s New Car at Actors Playhouse and title character in The Last of the Red Hot Lovers at Broward Stage Door.

Mark Della Ventura, playwright / actor for the script of his one-man show  Small Membership, and his performances in Small Membership and Lobby Hero both at Alliance Theatre Lab.

Christopher Demos-Brown, playwright  for his new work about a dysfunctional family coping with personal baggage during a hurricane, Captiva, at Zoetic Stage where he is a founding member. He previously won for his work in the 2009-2010 season. 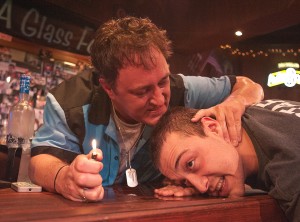 Todd Allen Durkin, actor for his depictions of very different but troubled men in Captiva, A Steady Rain at GableStage and A Measure of Cruelty at Mosaic Theatre.

Kim Ehly, playwright for her play about a woman discovering her sexuality, Baby GirL. presented by her own Kutumba Theatre  Project with Empire Stage.

Lindsey Forgey, actress as “outstanding new talent” based on her performances as the heroine in Baby GirL; Little Red Riding Hood in Into the Woods, the naïve daughter of the villainous industrialist in Urinetown the Musical, and the muse come to Earth in Xanadu, the last three shows at Slow Burn Theatre Company.

Island City Stage for the outstanding debut of a new theatre company with The Twentieth Century Way. Resurrected from the ashes of the former Rising Action theater, Andy Rogow and his board have reconstituted the Broward County company that focuses on gay-themed works.

Jodie Langel, actress for her bravura performances as the manic-depressive wife in Next to Normal at Actors Playhouse and the genial narrator in Joseph and the Amazing Technicolor Dreamcoat at Maltz Jupiter Theatre.

Margaret M. Ledford, director for her work on After the Revolution at the Caldwell Theatre Company, The Unseen at The Promethean Theatre, and The Turn of the Screw, for which she also designed the atmospheric lighting. She previously won for her work in the 2008-2009 season.

Michael McKeever, playwright for his new work about a Coral Gables family during the early 1960, Moscow, presented at Zoetic Stage which he helped found. He previously won for his work in the 2010-2011 season.

Stuart Meltzer, director for his “consistent outstanding work” as the resident director of Zoetic Stage

Laura Turnbull, actress for her performances as the blowsy toxic mother in The Effect of Gamma Rays on Man-in-the-Moon Marigolds at Palm Beach Dramaworks, the wife facing a mid-life crisis in Becky’s New Car at Actors Playhouse and the former political prisoner in Death and the Maiden at Mosaic Theatre. She previously won for her work in the 2009-2010 season.

Gregg Weiner, actor for a gallery of performances including Mark Rothko in Red, a crooked cop in A Steady Rain, a pragmatic lawyer in Race, and a magazine editor in Time Stands Still. He previously won for his work in the 2008-2009 season.

Additionally, the South Florida Theatre League (formerly known as SouthFloridaTheatre.Com) will bestow its Remy Awards at the same event. The Remy is named for Rem Cabrera, one of the League’s founders and the former Miami-Dade County Department of Cultural Affairs’ Senior Cultural Administrator and Chief of Cultural Development.

This year, the League’s board of directors has chosen to give the Remy Pioneer Award to former Carbonell Awards Executive Director Amy London who is leaving the state after almost 20 years as an actress, director, stage manager and community leader. The Service Award goes to Florida Theater On Stage for its coverage of local theater including its three-part series of essays about the past, present and future of regional theater, said League Executive Director Andie Arthur.

The Silver Palms were created and are administered by Finstrom, a playwright; Iris Acker, a veteran actress and current host of the BECON-TV program On Stage With Iris Acker, and theater critic Ron Levitt.

The awards presentation will be held at the annual Theatre League Holiday Party on Monday, Dec. 3, at a downtown Fort Lauderdale venue that will be announced soon. The party is scheduled from 7:30 to 11 p.m, and is open to the public, but there is an admission charge. Theatre League members attend free of charge. For reservations at 954-557-0778.

On a personal note:  We at Florida Theater On Stage are overwhelmed and grateful for this recognition. This award honors the work of everyone who has created and maintained the site including Oline H. Cogdill, Mary Damiano, Michelle Solomon and Brad Hathaway.  And in the spirit of full disclosure, not only did none of us have anything to do with the selection of the award and weren’t even aware of it,  but we got scooped on it ourselves by The Miami Herald!