Posted on December 5, 2017 by Bill Hirschman 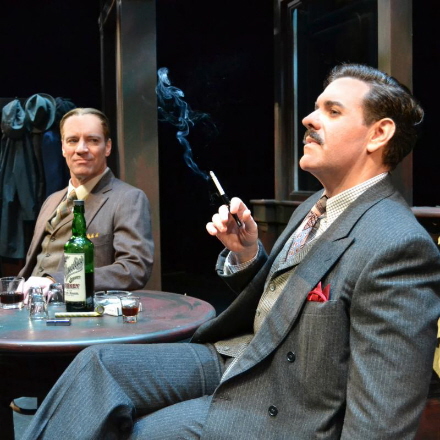 Some works of art are born in a long gestation period of mulling almost in the unconscious; others leap gloriously to life in an exultant flash that is one of joys of being a creative person.

Billy and Me, a play about the relationship between playwrights William Inge and Tennessee Williams premiering this month at Palm Beach Dramaworks, is both.

While doing his customary research before helming the 2015 production of Inge’s Picnic, Producing Artistic Director William Hayes was intrigued that a young Inge had been inspired to become a playwright by seeing a pre-Broadway edition of Williams’ The Glass Menagerie on New Year’s Eve in 1944.

“I became increasingly obsessed with him,” Hayes said. “Flash forward to 1953 and Picnic was getting the Pulitzer Prize and Camino Real was being panned on Broadway.”

“I was just increasingly fascinated with this friendship. Both men were alcoholics. Both men were gay. Both men had domineering mothers and fathers. We know on the record that Tennessee was jealous of Inge’s success over the years. But there wasn’t much documented about the friendship. Neither of them talked about it. Several months pass, I could not get it out of my head. I said somebody’s got to write this story, there’s a play here, there’s a movie here.”

He discovered they had been close friends as well as rivals; some speculate they were lovers. Williams spoke at Inge’s funeral.

Hayes’ idea incubated until February 2016 when noted Wall Street Journal critic and Dramaworks champion Terry Teachout was in town for a production meeting as the company prepared to mount his one-man play, Satchmo at the Waldorf.

“Bill said to me, ‘Look do you think there’s a play in the relationship between Tennessee Williams and William Inge?’ Teachout recalled.

No gestation here. “It was like someone stuck my finger in an electric outlet.  I knew a lot of about both men, I was particularly interested in Inge who I think is an underrated playwright. And beyond that I had I always wanted to write a play with two historical characters that takes place in a place where we don’t know all the facts.”

He had to fly back to New York the next day to review shows with a plan to return the day after for more work on Satchmo. Teachout shuttles around the country as a New York reviewer who is one of the few critics nationally to review regional theaters around the country. That’s how he connected with Hayes: In 2008, reviewing The Chairs, the first of several laudatory reviews of the theater’s work.

“The plane is half empty so I have an aisle to myself and I’m looking out the window and the whole thing came to me. I write the outline down in a frenzy.  When the plane landed, I was still on the plane and I called Bill from my cell phone, I said, ‘Look, I think I have something. Let’s have lunch tomorrow.’ So on the flight back I wrote out the scenario. Then we went out to dinner and I play out the scenario for Bill.”

Teachout had admired Inge for years. Both came from smaller cities, Inge from Independence, Kansas and Teachout from Sikeston, Missouri. “My background is similar. In some ways, our lives have the same shape and it felt very easy in inhabiting him as a playwright and finding a voice for him. (But writing) Williams is an impersonation, to put it mildly.”

Dramaworks has produced other world premieres and has a separate play development program, Dramworkshop whose first fully-produced work, Edgar and Emily (about Poe and Dickinson) bows in March. But this project is a self- contained commission.

What evolved was two scenes: One in 1944 after Inge’s revelatory visit to the Wingfield menagerie on stage. Then, the scene changes to 1959 in Inge’s Sutton Place Apartment. He has had a string of successes with Picnic, Bus Stop, Dark at the Top of the Stairs and Come Back, Little Sheba. But this night, he has opened A Loss of Roses which received a critical drubbing.

Another stimulating moment for Teachout occurred when he “found out that nobody knows where William Inge was on the opening night of A Loss of Roses, his first flop.  He vanishes…. Well, that was like dropping a steak in a cage for me” as a writer.

For a year and half, Teachout and Hayes, who would direct the work, conferred in one and two-hour phone calls to ensure they had and continued to have the same vision. They would play the scenes over the phone with the benefit that Hayes has been an actor.

The opening structure was a challenge: Initially, the play started in a way that required dropping backstory and context details in expository dumps that have sunk many such plays. A classic example is Mark St. Germain’s Scott and Hem in the Garden of Allah about Fitzgerald and Hemingway.

But what “cut the knot” occurred when Teachout thought of the play being Williams thinking back on the relationship, making it a memory play much as The Glass Menagerie was.

Over several months, the pair hosted closed readings and private workshops with the actors who would eventually play the parts on stage: Nicholas Richberg as Williams and Tom Wahl as Inge.

“The goal was try to road test the script as far as we could so that we would be farther ahead than the usual (plays) are with a 3 ½ week rehearsal period,” Teachout said. Indeed, Hayes added an extra week to the rehearsals – a highly unusual and expensive move for this region.

“I did more rewriting (once the actors became involved), not because it wasn’t working, but that’s when you realize this can be tighter, this can be sharper when it’s in the room. You have a clearer sense of the characterization. We would rehearse, I’d grab a burger on the way home and then rewrite three or four hours and they’d do it next day. I was actually writing speeches here in the rehearsal room,” Teachout said. “But it came together very quickly because we had done all the preparatory work. Bill and I were on the same page.”

There has been a bit of a revival of interest in Inge in recent years whom Teachout has championed as “a major American playwright.” But with only four frequently produced works, he remains less known by more casual theatergoers “because he was not as flashy a playwright or as flashy a person as Williams, Arthur Miller, as the playwrights who are better known,” Teachout said. Enduring fame in popular culture is difficult “when you don’t have a story to hang on somebody. Williams is an interesting man; Inge is, too, but you have to know him.”

Hayes concurred: “Tennessee was bigger than life and Bill was always in hiding, which is one of the things we deal with in the play, that is about being authentic — that Tennessee Williams was always honest about what he was and that Bill Inge wasn’t. Watching this play you will come away of what both of these men were like as personalities – and hopefully consumed with a desire to see plays by William Inge.”

Teachout, who has written biographies, opera librettos and maintains a popular blog, isn’t pausing in his critic duties although he stopped reviewing work at Dramaworks when the Satchmo relationship began.

But this work seems to energize him in a singular way. “This is so much fun. It’s like a vacation for me. I love my work as a critic, but there’s nothing quite like my getting in a rehearsal room. And the whole world falls away and you’re focused on the world of the play and the people you’re working with and suddenly it’s six o’ clock. It’s truly a wonderful way to make a living.”