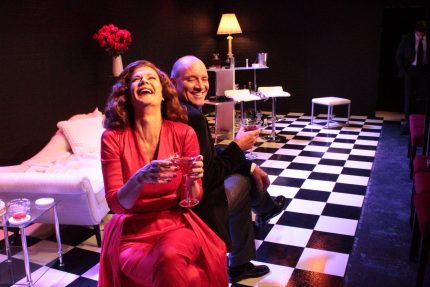 The soul-killing inherent in the film dream factory’s deconstruction and then sanitized reconstruction of its icons has been a popular topic, from 1932’s What Price Hollywood to Odets’ 1949 The Big Knife to four versions of A Star is Born.

But Michael McKeever’s incisive world premiere The Code at The Foundry attacks it from a different fresh angle that is painfully topical.

It focuses mercilessly on the industry’s hypocritical denial and repression of many of its artists’ homosexuality since its founding. And in a broader relevance, it excoriates “mainstream” society’s thorough-going violation of individuality by insisting that our icons (and by extension, all of us) cannot publicly be who they really are – sexuality being only one facet.

But what pushes this fine work into a deeper pertinence for Florida audiences who still read a newspaper in the spring of 2022 is the inescapable resonance. These forces depicted from 70 years ago are thriving in Tallahassee and the nationwide GOP this month – worse that they are duplicitously covered up with more finesse (and sometimes blithely with less) than in 1950 when the play is set.

The set up involves three real-life players in Hollywood. Billy Haines is a successful interior decorator who was the most popular movie star in the business twenty years earlier. He left in disgust when MGM head Louis B. Mayer demanded the openly gay actor leave his partner and marry a woman, any woman.

There’s Tallulah Bankhead, whose adjectives and nouns encompass the iconic hedonist actress alcoholic drug-addict bisexual. She’s visiting in town while awaiting word on her screen test for Amanda in the film of The Glass Menagerie, a part for which she is willing to temporarily abandon Broadway.

Henry Willson, the subject of Island City Stage’s 2019 play Starmaker, is the powerful not quite in the closet agent who molds young men (ala Henry Higgins) into potential star material (Rock Hudson was one) both bedding them and controlling them like a puppetmaster.

They have met at Haines’ home for a few drinks before going to a party hosted by famed director George Cukor. Willson has brought his latest attractive creation-in-the-making, “Chad Manford,” a name Willson has invented and may change once again.

The industry’s factory mentality applied to producing dreams is skewered when Haines asks Willson about Chad, “What’s your story? Everyone has a story.” Willson jokes “The truth is I’m still working on it….  I think I might have him be an orphan.”

A good deal of insider sex-drenched gossip ensues. With quips and barbs similar to those about theater in All About Eve, these witty articulate denizens of another world are quick with one-liners describing Hollywood: “It’s like paradise — with a lobotomy.”

That plays into Haines’ and Bankhead’s lament that what was once a more live-and-let-live industry – now having become a pillar of popular entertainment — is now imposing a false face of straight-laced respectability that will not upset Middle America’s ticket buyers.

“You can’t do anything you want,” Willson warns, nodding to the industry’s increasingly imposed Motion Picture Production Code. “There are rules.”

But Haines recalls when he first arrived to what felt like home for the first time.

And now “Look at what Hollywood has become. There’s this desperate Stick-up-your-ass Morality that’s bleeding into everything… These days, the House Un-American Activities Committee has set up shop at every studio. Everywhere you look, people are turning on each other. No one can speak their minds. No one can be themselves. God forbid you look at a waiter the wrong way. This town used to be decadent. And glamorous. And beautifully depraved. These days, everyone is so desperate to appear wholesome and proper. Everyone wants to be respectable. When we all know, there’s absolutely nothing in this town that is respectable in any way.”

Indeed, Willson says later, “To the people in the middle of this country. The ones who go to the pictures. The ones who actually buy the tickets. Yes. They are simple and unassuming. They have no dark fantasies. Nor do they have any need to see yours. Disney cartoons and Gene Kelly musicals. These are the absolute limits of their creative minds…. The Legion of Decency and the Catholic church have told these people what these people should be. And they are content. End of story. They’re simply not ready for anything more exotic.”

Toward that end, Willson asks Haines for a favor involving Chad’s own lover that sets off heated arguments and turns the cocktail party into a fiery debate about hypocrisy and the infringement, virtually outlawing a person’s real self.

By the upsetting finale, Tallulah comforts Haines mourning a society that finds his pure love unacceptable. Stroking his head in her lap, she quotes Tennessee Williams in a speech that resounds with this year’s news in Florida: “All the burdens that we carry today will become a memory, and years from now, this memory will be recalled, and become an anecdote or a story or a poem or a warning. And this anecdote or story or poem or warning will be shared with other people. And some of these people, whoever they are, will recognize your plight, and realize that they are not alone in their sadness.” She adds: “Your plight someday might be someone’s salvation.”

McKeever is venerated locally as the prolific source of comedies and dramas ranging from the hilarious Clark Gable Slept Here to the insightful Daniel’s Husband that played off-Broadway, and most recently, the affecting The People Downstairs at Palm Beach Dramaworks about the colleagues who hid Anne Frank’s family.

Those who have been happily tracking his work for nearly 25 years can chart how this work and the last two mentioned skillfully dig deeper and deeper into social issues viewed through their profound effect on individual human beings.  His writing continues to be welcomingly witty, but in script after script there is a growing but controlled passion depicting people in crisis.

Some of the play is aimed at The Foundry’s predominantly gay patronage. When Tallulah talks directly through the fourth wall, the jokes and references are clearly riffing off the sexuality of the audience.

Tallulah tells the audience directly in a lengthy monologue, “I find homosexuals to be a fabulous mass of contradictions, don’t you? I mean, they so clearly loath themselves for being what they are, and yet at the same time take such pride in being so wonderfully different. I mean, just imagine living a life where you cannot openly be who you truly are. The utter burden of such a thing.”

The playwright is aided immeasurably here by the cast, including McKeever himself who plays Willson, and two actors he has worked with often, Mia Matthews disappearing inside Tallulah and the ever-dependable Tom Wahl as Haines, plus Gabriell Salgado, who ironically was Frankenstein’s creature for Zoetic Stage earlier this season. More on them later.

But also crucial to the play landing solidly is director Christopher Renshaw, a Brit whose musical Taboo was Tony-nominated and who moved to Miami where he recently helmed the successful world premiere of A Wonderful World, a lush no-expense-spared musical about Louis Armstrong at Miami New Drama. Where the latter was a huge broad-stroked undertaking, this is an intimate eavesdropping on people who love to banter and who eventually will descend into the heat and secret pain of Who’s Afraid of Virginia Woolf.  His skill at staging is evident in how he places people and moves them about the checkerboard floor. But there are grace notes, such as the simple turning of a telephone in different directions that heighten the drama in a The Boys in the Band moment.

Back to the performances, certainly molded by Renshaw, but from actors we have seen repeatedly giving first-rate no-asterisks work for years with other directors.

Matthews has demonstrated an ocean-wide range from drama to comedy, from Marie Antoinette in Theater Lab’s The Revolutionists to the insane mother in Island City Stage’s Hir. It would be hard to think of a better actress to inhabit the outrageous Tallulah, making a credible human being out of someone who has created herself as a unique creature, even as she stretches her arms wide and juts her chin into the air.

You buy her from the moment the show opens when Renshaw has her draped over a settee with a cigarette in one hand and a Manhattan in the other and she coos in that deep octave directly through the fourth wall to the audience.

When she is introduced to the novice Chad, Matthews nails the welcoming line, “Hello, I am a lesbian. What do you do?”

We’ve said it before: Wahl is one of the finest actors in the region, in part because no matter the emotion or character or situation, you never catch him acting – although he becomes any of a wide array of disparate people.

Salgado, a recent New World grad now in his third professional production, has the least showy role, but dives into the skin of a decent young person hungry for success and gingerly navigating this cocktail party of characters and a challenge to his own integrity.

And finally, McKeever the actor does not shy away from Willson’s cold practicality. His Willson has not sold out per se or given in to pressure; he simply knows the reality of what it takes to succeed and is quite willing to play by those rules if he wins in the end.

He freezes the blood as he quietly but commandingly orders his protégé, a former soldier, to pay attention:

Then there is a breath-stopping scene in which he is exerting his influence over Chad where we see his face growing in the savor that his cynical outlook is being reaffirmed.

The set of Billy’s living room, all tasteful elegance in black and white and glass and steel was designed by McKeever and Renshaw.

This offering comes from producer/actor Ronnie Larsen who specializes in gay-themed work, from popular outlandish gay comedies to insightful dramas like Grindr Mom to penetrating work like An Evening With John Wayne Gacy Jr.

Note: The Foundry is a very small theater and tickets are, indeed, selling fast for a short run.

For helpful tips about directions, parking, arrival time, etc., visit the Contact Page at http://www.islandcitystage.org/contact/.  Do not park in the retail spaces directly across from the theater. They may tow your car. 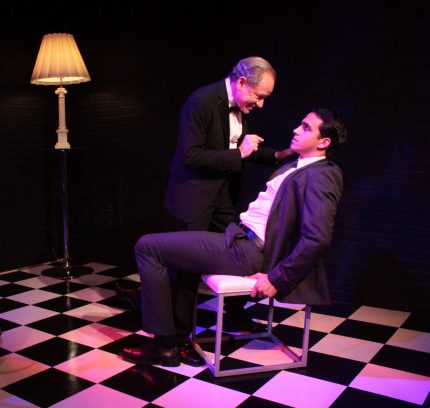