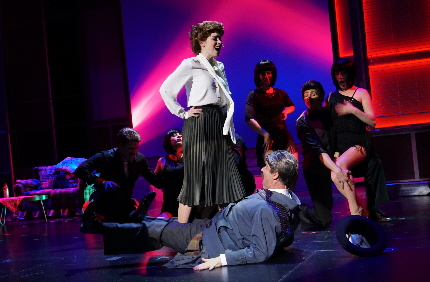 When the movie 9 to 5 bowed in 1980 and then musicalized in 2009, the comedy about women rebelling against being taken for granted and taken advantage of was downright funny, even if the injustice and sexism it depicted was universally acknowledged as all too real and all too common.

The musical currently being revived by Slow Burn Theatre Company at the Broward Center is still pretty funny, but in the wake of the #metoo movement and the Harvey Weinstein tsunami, it inherently contains a bit more topspin on the revenge fantasy against behavior now deemed intolerable and inexcusable.

9 to 5 fits all of those criteria. The story of three very different women who bond in sisterhood as victims of sexist oppression benefits from a sprightly score, a delightful script, a strong cast and band in this production, and an embrace of a slightly daffy spirit that echoes the joyful giddiness of sudden liberation.

Set firmly in 1979 in a cartoon corporate office dominated by IBM Selectric typewriters, the female secretaries are clearly the backbone of the operation while being underpaid, overworked and belittled when not being forced to bring cups of coffee—or being sexually abused. They do not grease the wheels; they are the machine.

A trio of heroines emerge: Violet (Laura Hodos), the ultra-efficient but friendly 15-year veteran who puts up with the grief in hopes of being made a corporate officer; Judy (Erica Lustig), virtually unskilled because she had been completely dependent on the husband who just left her; and Doralee (Jeanine Gagloff Levy), whose full-figure has attracted the unwanted advances of the scumbag boss Franklin Hart (Ben Sandomir). The insufferable Hart is adored by the stern office manager Roz (Cindy Pearce).

Events coincide that lead to the women kidnapping Hart and holding him in chains connected to a garage door opener, meanwhile trying to prove he has been embezzling from the company and at the same time overhauling the office into the kind of fair and compassionate workplace we all dream of.

In addition to the infectious title number left for the finale, the alternately peppy or soulful music was penned by Dolly Parton who played Doralee in the film and was the impetus for creating the musical. Her lyrics are just passably pedestrian, but no one comes looking for Sondheim. The wry droll script is by Patricia Resnick who co-wrote the screenplay and is stronger than most people realize.

Director-choreographer Patrick Fitzwater is clearly having a good time helming this entry and it’s hard not to join him in enjoying the silliness. He’s blessed, of course, with a uniformly terrific group of singers — Hodos as always, but also Pearce who makes Roz’s comedic numbers more memorable than in other editions. Hodos, Lustig and the hilarious Gangloff Levy exude a verve whether leading group numbers or delivering the empowerment anthems.

They also have a solid sense of comic timing, especially Sandomir as the self-described “sexist, egotistical, lying, hypocritical bigot.”

Michael Ursua leads the band and melds the voices including Parton’s bent for backing up even the solo numbers with an unseen backstage chorus.

This is the third production this critic has seen and the other two were not in this edition’s league. It’s a work more interested in simply having fun than having much weight other than the obvious anti-sexism element. But in this rendition in 2019 and with Slow Burn’s expertise, there’s an enhanced vicarious sense of long overdue justice.

9 to 5 presented by Slow Burn Theatre Company through April 14 at the Amaturo Theater, Broward Center For The Performing Arts, 201 SW 5th Ave., Fort Lauderdale. Performances are Thursday through Saturday at 7:30 p.m., Sunday at 2 p.m. Tickets are $47-$57. Call (954) 462-0222 for tickets, at www.browardcenter.org or #Ticketmaster.com; in person at Ticketmaster outlets or the Broward Center’s Auto Nation Box Office. Info at www.slowburntheatre.org