Dramaworks’ Fences Rages Against The Dying Of The Light 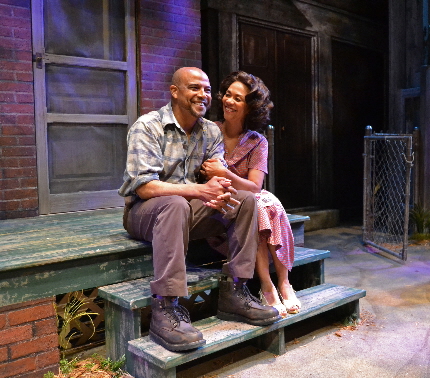 In most dramas, characters might get angry, they might yell, they might shout. But they rarely rage. They rarely reach the fury of a natural disaster that can neither be reasoned with or assuaged. In Palm Beach Dramaworks’ triumphant production of August Wilson’s Fences, this Troy Maxson rages.

Whether he is delivering a defiant challenge to death, railing at the racial prejudice that has undercut his dreams, or privately excoriating his own guilt for making destructive choices —in all of these and more, this Troy unleashes a lifetime of festering wrath in a basement barrel baritone.

And yet, in director William Hayes’ unique vision embodied in the bravura performance of Lester Purry, Troy harbors a compassion and vulnerability that he carefully shields from the harsh vagaries of life as well as his own family.

It is unfair to call the Purry-Hayes creation a performance because this Troy Maxson simply “is.” While both artists employ decades of artistic craft, you never catch them at it.

Fences, the 1950s entry in Wilson’s decade-by-decade portrait of the African-American experience in the 20th Century, may tell the tale of a Pittsburgh garbage man, but it is as epic and tragic as King Lear in the wide sweeping loops spiraling into self-destruction.

It is a relatively longish play, which knowingly luxuriates in depicting everyday life among a socio-economic class alien to a majority of theater goers. Troy and his buddy Bono spend hours after work on the back porch bantering and sharing a bottle as Troy’s loving wife, Rose, watches bemusedly when Troy savors launching for the 40th time into one of his stories about “wrasseling” the Devil for three days.

Hayes amazingly holds the audience with invisible staging and a pacing that may seem deliberative, but actually is a steady driving force. It also helps that he has put together a superb cast without exception, all clearly bound together to tell a story that means more to them than just a paycheck.

But obviously what propels and mesmerizes the evening is the central performance of Purry, who recently did the role in Portland but embraced Hayes’ different vision of Troy and the play.

In the best performances of the role in this most-often produced Wilson play, the adjective “volcanic” is frequently invoked, most notably in James Earl Jones iconic original in 1987. Purry certainly erupts and growls as well as a half-dozen other verbs as he jokingly boasts, “Death ain’t nothing but the first ball on the outside corner.”

But what makes this Troy stand out is the physicality that Purry and Hayes invest in him. Troy is a former baseball player in the Negro League who yearned to cross the color line but believes that racism blocked his dream. He is a man who lifts cans of garbage every working day. So he strides across the backyard, he leans forward even when stationary, his arms and hands are usually in motion such as reaching out with an old baseball bat to point out something as if he was indicating where he is about to hit a home run. The aging athlete unobtrusively rubs aching arms and legs. He sees the physical act of sex as “punching a hole” in the otherwise unfairness of life. Little of this necessarily may be groundbreaking. But Purry absorbs it into Troy’s marrow like an atomic particle in kinetic motion.

The other aspect, again, is Hayes’ investigation into why Troy is the way he is, resulting in rare open shows of vulnerability such as when speaking to his newborn daughter, but more subtly running under Troy’s boasting and bellowing. It makes the audience more compassionate to a man who has inarguable virtues but also disappointing weaknesses and flaws. It also traces the cause of the eventual tragedy to Troy’s finding an outlet for his race-based rage in one unforgiveable betrayal, plus an ongoing friction with his son.

For a man quick with a joke with his friend and a lusty hug to his wife, Troy has an unforgiving strictness with his teenage son Cory who wants to be like his father when he grows up – something Troy angrily sidetracks because he knows his path is not something to emulate. He is trying to protect the boy, but he thinks doing it by showing love and compassion will doom him. He orders, no advises, that Cory must “take the crooked with the straight,” “Life don’t owe you nothing,” and “Make sure they do right by you.” He derails Cory’s desire to play football because “The white man not gonna let him get him anywhere” in sports.

All of this may best be seen in Fences’ equivalent of the “To be or not to be speech,” in which he responds to his son’s “How come you ain’t never liked me?” with a tirade that starts “Like you? Who in the hell ever said I had to like you?” In James Earl Jones’ rendition (find it on You Tube when it was excerpted for the Tony Awards program), Troy’s aria is almost vicious in maintaining that he fulfills his duty as the breadwinner by providing a roof and food, although we know that he has more paternal feelings than that. But Purry, still forcefully shoving back at the son, is clearly trying to teach his son a life lesson to help him survive what Troy perceives as an unforgiving world.

Firmly rooted in the black experience, Fences’ themes resonate universally, so while the detailed externals may be an education for some patrons, the audience cannot help but respond to their commonalities.

The rest of the cast is spot on. Karen Stephens, one of the best actresses in the region, is love incarnate. She knows Troy’s strengths, his flaws and their cause. Her Rose is a bit too placid in the early scenes, although she gently scoffs at his harmless stories. But when Troy betrays her, Stephens’ Rose unleashes an aria of pent-up pain over sacrificing her own individuality and dreams to further Troy’s.  It is a powerful and moving performance that only deepens as the play moves on.

Jovon Jacobs, just off playing Walter Lee in New City Players’ A Raisin in the Sun, inhabits the teenage son Cory who lives in fear of his father’s constant outbursts. Jacobs convincingly portrays the changes as Cory rebels and later when he returns home as an adult.

John Archie, a local veteran of Wilson plays, makes credible the decades of shared history that the grizzled decent Bono has with his running buddy. Warren Jackson is an earnest ne’er-do-well older son Lyons. Bryant Bentley is a wonderfully exuberant Gabriel whose outlandish behavior stems from a war wound. Jayla Georges and Raegan Franklin alternate as the young Raynell.

All of them, especially Purry, Stephens and Archie exude the palpable chemistry of people who love each other and who have been through decades of troubles together.

As always, Dramaworks designers and crew do exemplary work, but special mention is due Michael Amico’s photorealistic set of a dusty brick and weather-beaten wood backyard surrounded by a neighborhood of similar structures, all lit by George Jackson. Even on Dramaworks’ shallow stage, Amico always finds ways to give the sense of three-dimensions to his environments. There’s often something piece that subtly helps erase the sense of looking at a set –in this case, a telephone pole way off on stage left.  (A shout out to James Danford who will step away from decades as a master stage manager with this show.)

This season and the previous one at Dramaworks has proven this company’s reliability for expertly delivered theater regardless of the genre and title.

Fences runs through April 21 at Palm Beach Dramaworks, 201 Clematis St., West Palm Beach. Show times are 7:30 p.m. Wednesday, Thursday and some Sundays; 8 p.m. Friday and Saturday; and 2 p.m. Wednesday, Saturday, Sunday. Running time approximately 2 hours plus a 15-minute intermission. Individual tickets are $75. Student tickets are available for $15, and Pay Your Age tickets are available for those 18-40. Tickets for educators are half price with proper ID (other restrictions apply). Call (561) 514-4042, or visit palmbeachdramaworks.org.