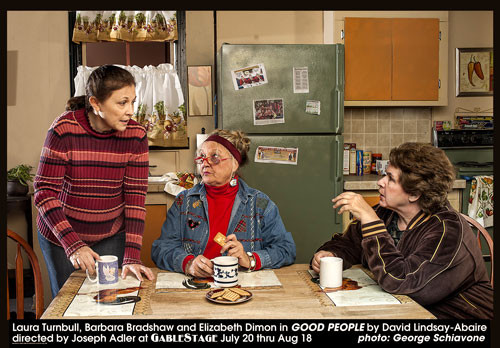 Laura Turnbull discusses her plan to get a job from an old flame, producing skeptical glances from buddies Barbara Bradshaw and Elizabeth Dimon in GableStage’s Good People / Photo by George Schiavone

Cut through the South Boston accents and into the fibers of Good People, and you’ll find that David Lindsay-Abaire’s 2011 Tony Best Play nominee is a character study of the finest sort. However, the fact that the lead character, Margie (pronounced with a hard “g” as the script indicates), has remained in South Boston’s Lower End should not be understated — this attachment to one’s childhood roots is what forms the foundation of Good People, now at Gablestage.

Margie is navigating life through a lower class existence, working as a cashier at the local Dollar Store. Her night out is playing bingo at a church hall with her landlady, Dottie, and childhood friend, Jean. They are “Southies,” colorful characters who still keep tabs on the folks they grew up with, recounting their escapades with their worlds revolving around the yarns they spin. Yet the events are viewed through jaded and cynical glasses.

When the play opens, Margie is facing the prospect of losing her job — the store’s district manager has taken note that she’s frequently late. Stevie, her young boss, has the grim task of firing her, even though he knows why she’s late — it’s the burden of her mentally disabled daughter, Joyce, who Margie gave birth to when she was a teenager. So for Stevie, it’s not just firing an employee, it goes deeper than that since he’s part of the Southie neighborhood, too. Margie tells a humorous story about Stevie’s deceased mother thinking that it will tug at his heartstrings, but it doesn’t work; he lets her go.

Desperate for a job, she approaches former Southie and old flame Mikey Dillon who left the hardscrabble neighborhood and the projects he grew up in for something better. “He was always good people,” Margie says about Mikey, who is now a fertility doctor with a home in upper crust Chestnut Hill, a young wife and a baby. What follows throughout the play after their initial meeting is clash between Margie and Mikey’s reconnection after 30 years. It’s a disconnect that addresses class structure, gender, racism and, most importantly, the nostalgic myths that we create when we re-imagine our past despite its opposition with who we have become.

Director Joe Adler has assembled an all-star cast for Gablestage’s Good People. Laura Turnbull as Margie understands the depths of the character’s struggles. By the end of the play, you’ve been thrust through Margie’s psyche from every angle, due mostly to Turnbull’s total immersion.

Mikey has his own set of struggles. As each layer of the character unfolds, from the time Margie shows up at Mikey’s office to when she begins to unravel him with shared secrets from the past, Stephen G. Anthony evolves the character. It’s a complex performance, especially in the second act when the essence of the former Southie emerges at one point like the Incredible Hulk.

Barbara Bradshaw as Dottie plays Margie’s rent-obsessed, crafty landlady with a ditzy appeal. Jean compares Dottie to Aunt Clara, the always forgetful character on the television show Bewitched. It makes for a good analogy as Bradshaw’s choices reflect this even before the comparison. Elizabeth Dimon as the no-nonsense, Jean, could have been plucked from the ‘hood. Her best moments are when she’s carping at Bradshaw’s Dottie — delivered with just the right snap and timing.

Clay Cartland, who is becoming one of South Florida’s busiest actors, shows the right reserve with Stevie. Renata Eastlick rounds things out as Mikey’s wife, playing Kate with a cool detachment that eventually gives way to compassion.

Adler’s skillful direction pulls everything together as he invites the audience in to this slice of life, playing up the underlying nature vs. nurture of Good People.

The creative set design by Lyle Baskin is inventive as he raises the doctor’s office to a second level, a step higher than Margie’s Southie kitchen in a very smart and symbolic display. Ellis Tillman’s costume design, especially Dottie’s accessories, add to the dichotomy of the social classes.

Good People is a very personal story — from the script by Lindsay-Abaire who grew up in Southie to the human emotion that emanates from an understanding by the director and cast. This is what aligns to make Gablestage’s Good People great theater.